Your morning cup of coffee is just not the same anymore. With coffeehouses sprouting in every corner, coffee has transformed from being a simple and unassuming morning drink to being something extremely complicated. Until a few years ago you only knew that there were two kinds of coffee – instant coffee and filter coffee. Today, you enter a coffeehouse and you could swoon at the variety they have to offer you. So, who discovered coffee and how?

Believe it or not, but goats were responsible for coffee’s tryst with mankind! Tales of yore say that an Ethiopian shepherd, Kaldi, noticed that his goats acted frisky every time they ate some red berries. The shepherd picked some berries for himself and so coffee began its journey with man. However, coffee was originally a food, at least in East Africa. People mixed coffee cherries (as hulled coffee berries are known) with animal fat to make an instant energy food. It was in the Arabian peninsula, where coffee also grew, that it was first developed into a hot drink. Coffee became extremely popular in the Islamic world as an alternative to the prohibited wine. 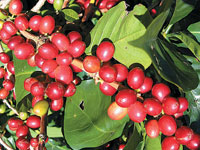 Flourishing trade between Italy and the Muslims of Africa and Egypt brought coffee to Italy from where it was introduced to Europe and Asia. Considered a Muslim drink, coffee became more widely accepted by the Europeans after Pope Clement VIII declared it a Christian drink in 1600.

Coffee became popular in North America during the American war of independence when tea from Britain was in short supply. Today, America is the largest market for coffee.

Coffee bean to coffee powder
While there are different varieties of coffee in the world, the two more popular ones are Coffea arabica and Coffea robusta. Coffea arabica, indigenous to Ethiopia and Yemen is said to be richer in flavour than Coffea robusta, which is widely grown in Africa and Brazil. More bitter than the arabica variety, Coffea robusta is easier to care for and hence cheaper. Each, of course, has many sub-species all unique in themselves. So how does Coffea arabica or robusta turn into the coffee powder you buy from your grocery store?

Coffee berries from the coffee plant are first skinned to reveal the coffee beans, which are fermented, washed and dried. The green coffee beans, as they are called, are then roasted to bring out the actual flavour of the coffee. Both the strength and flavour of the coffee depend on how long the beans are roasted. Beans that are only slightly roasted have a stronger flavour and are bitter as they have higher caffeine content. Roasting the beans longer makes the beans more sugary and less fibrous. The roasted beans are then ground, either coarsely or smoothly and then packaged to be sold.

The most expensive coffee in the world
The most expensive coffee in the world is processed on the islands of Indonesia and is called Kopi Luwak locally and Civet coffee elsewhere. Civet coffee is made from coffee berries defecated by the Asian Palm Civet, a mammal native to South-east Asia and Southern China. Raw coffee berries form a natural part of the civet’s diet. The beans in the berries, however, remain undigested and are excreted. It is believed that the enzymes in the civet’s stomach enhance the flavour of the coffee by breaking down the proteins that make coffee bitter. The excreted beans are then washed and only slightly roasted so as not to destroy the complex flavour of the beans. Sold at a premium price of $600 a pound, Civet coffee is available mainly in Japan and the United States. Limited quantities reach other parts of the world as well. 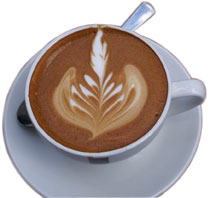 Espresso: The espresso was developed in Italy in 1940. It is produced by forcing very hot water through coffee at a high pressure. Specially designed espresso machines that can control the temperature of the water and the pressure are used for making espressos. A good espresso is syrupy and has creama or reddish-brown foam on the top. An espresso must be served immediately after it is brewed. A delay of more than two minutes between serving an espresso and consuming it will cause the beverage to degrade due to oxidation and cooling.

Cappuccino: Another coffee variant from Italy, cappuccino was invented in 1900. A cappuccino is made from espresso, milk and milk foam, and is generally served in porcelain cups as their heat retention capacity is much higher than either glass or paper. The milk foam in the beverage acts as an insulator trapping heat in and allowing the coffee to stay hot longer.

Café mocha: Café mocha is made using one-third espresso and two-thirds steamed milk with a portion of chocolate generally in the form of syrup. Whipped cream, dustings of cocoa or cinnamon powder and marshmallows are added to both enhance the flavour of the coffee and to decorate it.

Frappe coffee: The national coffee of Greece, frappe is a frothy cold coffee drink made by mixing spray-dried (a system that uses hot gas to dry materials) instant coffee with water. The frappe was discovered quite by accident in 1957 at the International Trade Fair in Greece. A representative of the Nestle company was looking for hot water to drink his regular instant coffee during a break. Finding no hot water, he mixed the instant coffee in cold water in a shaker and the first frappe was born. Frappe is extremely popular in hot weathers.

Coffee in India
Like the Kaldi legend, India too has quite an interesting story to tell of how coffee reached this country. Arabia, where coffee was widely grown, had monopolised coffee trade. The Muslims did not allow any other country to grow their own coffee by ensuring that the coffee beans they exported were sterile or infertile. This they did by boiling the beans. However, in the 1600s, there came a pilgrim to Mecca. His name was Baba Budan. Having tasted coffee, Baba Budan wanted to take it back to India with him. But with the Arabs being so careful about their coffee, Baba Budan had to engineer a great escape from Mecca with fertile coffee seeds strapped to his belly. It is believed that Baba Budan planted these seeds in the hills of Chikmagalur, in Karnataka.

Coffee in India is mainly grown in the three southern states of Karnataka, Tamil Nadu and Kerala. India produces both wet-processed and dry-processed coffees and has its share of specialty coffees and estate brands. India accounts for 4% of the global coffee production, 72% of which is exported. Although Indian coffees like Anokhi, Mallali Estate and India Monsooned Malabar are popular with coffee consuming countries, they are largely drunk mixed with other coffee variants and never by themselves. In India itself, coffee consumption is restricted to the south Indian states and is rarely an alternative to tea in the North. However, with the café culture, coffee seems to be becoming popular everywhere in India.