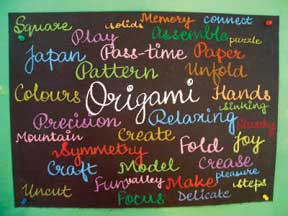 (This article is a reflection on the author’s experiments with origami in a boarding school as part of a Makerspace and how curriculum and pedagogy in origami-based geometry organically developed after children stumbled upon symmetry, form and spatial understanding while folding paper models. While origami began as an art in this school, it soon enthused children to explore the math behind origami through their own tinkering experiences. This article brings to light experiences where experiential learning preceded technical learning in geometry across all ages.)

It was in June 2014 that the old staffroom at Sahyadri School (KFI), Pune had been transformed into a space that six adults had envisaged as the new space for children and adults. Organically, it was called ‘Tinker Shed’ – a space for tinkering with materials. Since it was still developing in form, structure and method, it was more a shed with tools and materials, a warehouse, rather than a workshop or a carefully organized laboratory. We wanted it to be the beating heart of this beautiful school – we conjured up images of a lively lake with various busy creatures. Little did we anticipate the tsunami of personal and group experiences which were a turning point for many of us in how we understood hands-on learning!

One of the many activities in its ambit was origami – an unusual choice for a tinkering space. However, we were convinced that indulging in origami could only be a good thing for children. This was particularly so for our children were living in a boarding school, indoor-bound for weeks thanks to the monsoons that flood out any outdoor activities even on a hill. In its first year itself, we decided to have everyone play with paper – from pre-school to grade 10 (the highest class in the school that year)! 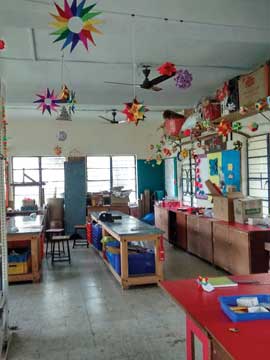 We organized multiple photocopies of instructions from origami books and online resources, theme-wise and with varying difficulty levels. We organized paper of different colours in different sizes, scissors, paper cutters, cutting mats and glue at arm’s length. Very soon, we realized that this was becoming a hotbed of folding fads for the 300 students on campus. With a superb value-for-effort quotient, origami classes ended with walking out with mini trophies to showcase an hour spent with focus, determination, visualization and dexterity skills. “I want to make that” became the buzzword and soon we had a growing art gallery of physical models which was like a menu card for children to choose from!

Origami and symmetry
“It just looks odd to me,” said a rather confused eight-year old girl, holding her six-unit cube, unsure of what was wrong with it, even though it very much resembled a dice. Instead of using three colours for each of the three dimensions, she had used two colours, and therefore some of the six faces, in her words, seemed “odd”. Over the next 30 minutes or more, she sat back and took her own time to correct her model – using different colours, but same size of sheets of paper – working with trial and error, to begin with, and then finally understanding what colour-symmetry this particular model demanded. She walked out of the Origami Room, exuberantly and loudly admiring her own piece of art. To anyone else, it was, just a cube.

To me, as her origami teacher, it was reaffirmation of origami being a tool to fan what is innate in all my children – and remains latent in many an adult – the curiosity to solve a puzzle.

For the uninitiated, origami is the art of paper folding – no cuts, no glue. It is traditionally associated with the Japanese where it originated, but modern origamists employ several advanced techniques of paper-craft such as sculpting, shaping, curved folding, wet-folding, etc. Symmetry, in its simplest definition, is ‘the quality of being made up of exactly similar parts facing each other or around an axis’. Symmetry is fundamental to origami.

Several recurring incidents of origami students watching their models carefully and checking for colour and form symmetry convinced me to keep the following objectives at the fore in formulating a learning ladder combining the study of symmetry through paper-folding constructions. At the end of the module, the students should have been able to:
1. Calculate the colour symmetry befitting the model at hand.
2. Modify the size of a model mathematically – working with proportions, dimensions and basic geometry.
3. See geometric symmetry in models that look more art than math, in particular, the case of kusudamas (decorative floral balls).
4. Understand basic kinds of symmetry without knowing the terminology.
5. Stay keen on pursuing the puzzle-like joy of working out asymmetries.

What is now a robust, tested module on teaching symmetry rules through origami constructions, took its own time to be fine-tuned. What was very interesting was to see the left-brainers and the right-brainers point out stereotypical asymmetries while working. Such conversations were dotted with geometry vocabulary that had become common parlance. 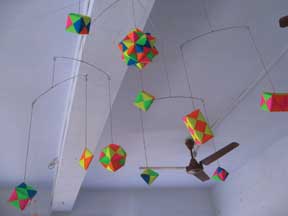 Origami and 2D geometry
“Fold it into a triangle first and cut off the rectangle.”

For a nine-year old to give that instruction while teaching her classmate to cut a square from an A4 sheet may seem tutored. However, the tinker shed was a hub for words that would make a passer-by think that we were revising a lesson on quadrilaterals. A week-long experiment raised the bar – each student had to teach a model to another but not by demonstration, only verbally.

This meant that while teaching something as simple as the Yoshizawa butterfly, one had to use words like triangle, diagonal, rectangle, right angle, intersecting lines, perpendicular, etc. The next challenge would be to verbally demonstrate the most famous origami symbol – the Japanese crane. How would you do without saying rhombus, mid-point, perpendicular and isosceles triangle?

Origami and 3D geometry
“This one is also another of the star-shaped ball kind, akka?”

This was a common question when my young origamists wanted to fold various three-dimensional models based on dodecahedrons. Kusudamas are decorative floral balls, often made with the dodecahedron or the icosahedron as the base shape. The cube was the most common and often lost its charm in the jungle adventures through middle-school ambitions. Over time, we could explore all of the Platonic solids and many of the Archimedean solids through origami ambitions. It was the most organic way of understanding the number of edges, vertices and shapes of faces for each of these solids.

There were children as young as grade 5 talking about ‘stellated’ and ‘truncated’ solids. There were students in grade 7 and 11 wanting to working on fractals. There were students from grade 9 onwards who were fascinated with planars when they saw “paper-slices intersecting at the centre”. As a teacher, I could not have asked for a more fast-tracked and steeper learning curve into geometry!

Origami and visual puzzles
“Fold the square into two rectangles and similarly, fold the sheet into 16 equal parts.”

The result of this seemingly straightforward instruction was astounding – the paradigms that this showcased got me hooked on to origami folding puzzles. My class of eight students had folded their original square sheets into equal parts but only three of them had folded 16 squares. I wouldn’t want to reveal the other possibilities here for the readers to tinker on their own! Here’s a hint, though – the class revealed that there were “infinite ways of dividing a square into 16 equal parts!”

Such were the questions that my students would love coming up with while tinkering with paper – there is nothing more exciting than knowing that setting a mind-boggler for a large population of boarding school is democratic – anyone could come up with these puzzles and I promised to take these to every class that I conducted. For a while, we would put these up as charts outside the Tinker Shed and they became heavily competed over – not just for solving the mystery but also for setting the next puzzle!

The road ahead – the origami universe at large
Origami is not mathematics, origami is not visual arts, origami is not craft – it has elements of each and a lot more. The study of polyhedra became as much a study in art – and that is what I consider the greatest success of the origami program. There have been several origamists and mathematicians who have stumbled over the umbilical cord that connects the two and much research has gone into exploring other areas of mathematics that lend themselves to origami and vice-versa. The story here is only a nudge to readers to blur the lines between math and origami and enjoy the process of hands on paper, hands-on learning and child-like tinkering!

The author has taught English, social studies and origami for nine years in Rishi Valley School (Chittoor) and Sahyadri School (Pune). Thereafter, she headed an educational non-profit organization that delivered digital educational resources for government school learning and teacher training in Chennai. She also teaches Theatre and Advanced English to children and consults with several schools in Chennai over school development projects and language teacher training. She can be reached at [email protected].