Ca, ca, ca shouts Adwait excitedly when he sees a car pass by on the road. My son is 18 months old and my time is best spent when I am with him. During our time together, Adwait and I learn from each other. What I learn from him are simple yet significant things. He has helped me slow down and find pleasure in the ordinary things of life. I have become more patient and self-controlled. I have learnt to appreciate even things as mundane as being able to sit upright. Watching Adwait make an amazing journey from knowing nothing to learning to do so many things has been an entire lesson in itself. 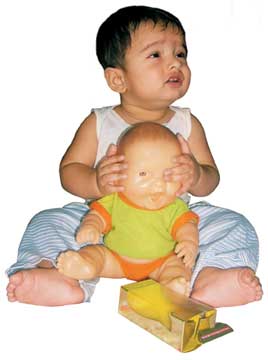 What has been most rewarding is seeing the human mind grow. Adwait enjoys his time the most when he is in the kitchen with me. Until two months ago, he was only interested in the act of cooking – the stirring, the mixing and the seasoning. Today, Adwait knows that what is cooking is food and can be eaten. Now when he sees me cooking he brings his plate and thrusts it in my hand and looks at the food on the stove eagerly.

Something else that Adwait likes to do is to browse through my CD collection. Pulling out all the CDs and scattering them about used to be a favourite game with him. All my efforts to try and get him interested in the faces on the CDs would be in vain. Then one day when he was at this game again and I made no attempts to tell him who was who, he did not rest until he got all the names out of me. Today he can tell Amitabh Bachchan from Yesudas. Isn’t it remarkable how the human mind, a blank in the beginning, starts to collect information and remember it?

Adwait and I love our trips to the supermarket. While earlier he was just a passive shopper, today Adwait walks around and picks up things that fascinate him and comes and drops them in my basket. On one such shopping trip I saw him looking at a shelf that had our regular coffee powder stacked. Adwait saw that there were bigger and smaller packets of the same coffee. While he first reached for the bigger packet he soon realised that it was too big for him and quickly moved to pick up the smaller one.

Isn’t it exciting monitoring the growth of a child? Something that most of us wait for as a baby grows up is its first intelligible word. Adwait’s was bow bow. Today, Adwait has a total of four words in his vocabulary. He is so excited to find his voice right now that he is constantly babbling. Unintelligible though his babble is right now, Adwait is so eager to talk I know he will soon progress from saying ca, ca, ca to bus, truck and lorry. I am waiting to hear him speak.