Many of you may be familiar with Gerald Durrell’s entertaining books. If you are not, it’s a good time to grab one. Gerald Durrell was a naturalist, zookeeper, conservationist and author. Reportedly, his first-ever spoken word was ‘Zoo’! Durrell was born in India in Jamshedpur. Instead of attending school, young Gerry spent his early childhood on the island of Corfu collecting different species of animals, right from bugs and bees to scorpions and owls. He was home schooled with great difficulty as only natural history would hold his attention.

Gerry’s love for animals led him to take up his first job as a student keeper at Whipsnade Park Zoo in London. With the £ 3000 that he inherited from his father, at 21Gerry set off on his first animal collection expedition to the British Cameroons (now known as Cameroon). From then on for the next 10 years he conducted similar expeditions to Cameroon, British Guiana (now known as Guyana) and other places to collect animals for his zoo.

In 1958 Gerald Durrell set up the Jersey Zoological Park which housed endangered species and ensured their survival by captive breeding. In 1963 the zoo was turned into the charity ‘Durrell Wildlife Conservation Trust’. The trust has saved many endangered species and aided their way back to the wild. The Durrell Wildlife Conservation Trust has established various initiatives like the inter-zoo exchange programme, cooperative agreements with governments, research and similar trusts in Canada and the United States. Gerald Durrell’s captive breeding method of saving endangered species has been a model for wildlife conservationists and zoos.

Durrell was also a famous author and a television presenter. His humorous accounts of his early life and travels across the globe, have formed the basis of 33 books which have been translated into 31 languages. His bestselling book “My family and other animals” about the time he spent on the island of Corfu was made into a television series. Earnings from his books helped him set up the Jersey zoo and finance his expeditions. His early expeditions filmed by the BBC Natural History Unit have been broadcast in several countries. He also hosted seven television series and made several appearances on other television programmes. 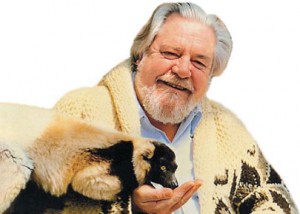 Durrell received many awards and recognition for his conservation efforts, including the Fellow of the International Institute of Arts and Letters (1956), Fellow of the Institute of Biology – London (1974), and Order of the British Empire (1982). He died in 1995. Many young people and adults have been inspired to take up careers and work in natural history and conservation by his work—and many more have been engaged and entertained by his books.