We all read magazines. In fact, you are reading one right now. Teacher Plus is a magazine that comes out every month. Dictionaries define a magazine as a publication issued regularly which contains articles, stories, photographs and advertisements. But the definition doesn’t end there; the word has other meanings as well. A magazine is also defined as a part of a gun which contains the bullets; it is also a place where ammunition is stored. How did one word acquire such radically different meanings? Are these really different words which have more or less the same pronunciation? It’s not the case; all the different meanings have evolved from one word. The word magazine is not English at all; it comes from the Arabic ‘makhzan’ meaning ‘storehouse’. The original magazine, therefore, was a place where grains and other supplies were stored. This perhaps explains why the part of the gun which contains the bullets is called a magazine – it is a storehouse for the ammunition. Since books are a ‘storehouse of knowledge’, all books were referred to as ‘magazines’. It was only in the 19th century that the word began to be used exclusively with periodicals. 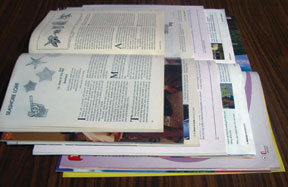 For a magazine to be a storehouse of knowledge, it needs to be filled with the right material. The person who normally performs this task is the reporter. Do you know that this individual who wields the mighty pen is related to the more humble porter? What is the connection between the two? The word ‘porter’ is from the Latin ‘porto’ meaning ‘carry’; and this is what the men in red do, they carry things from one place to another. The Latin prefix ‘re’ means ‘back’; so, the job of the ‘reporter’ is to actually ‘carry back’ something. What is it that he carries back with him? It’s the news!

There are different types of reporters. Some work for a particular newspaper or magazine, while some choose to be independent. These individuals contribute articles to different organisations; often, they are commissioned to write them. We call such people ‘free lancers’. Nowadays, when we hear the expression ‘free lancer’, we immediately think of a writer. The original free lancers, however, were no writers; they were in fact mercenaries. It is quite possible that most of them didn’t know how to read or write! A ‘lance’ as you probably know is a long spear, and a ‘lancer’ is someone who wields this weapon. In the old days, every army had lancers. When you referred to someone as a ‘free lancer’, what you meant was that the individual was free of any loyalty. He was willing to fight for anyone who paid him a handsome amount. He didn’t fight for free!

Whether a reporter is working as a free lancer or as a full time employee in a particular organisation, something that both individuals have to do is to meet deadlines. When an individual works for the media, the threat of the ‘deadline’, like the sword of Damocles, constantly hangs over his head. In order to make sure that he doesn’t incur the Editor’s wrath, the writer moves heaven and earth to submit his article on time. If he fails to do so, his boss may read him the riot act, or confine the piece he has written to the dustbin. Dictionaries define a ‘deadline’ as ‘a date or time by which you have to do or complete something.’ Based on this definition, a deadline is unlikely to put the fear of God in anyone; it isn’t what you might call life threatening. But the original deadline was exactly that. It was something that could get you killed. The word was first used during the American Civil War. In prison compounds in the south, a line was drawn within the compound. Prisoners were told not to cross this particular line; if they did, they were immediately shot dead! So the original deadline was what the word suggested. If you crossed it, you were simply shot dead. No compromises! Maybe it’s time we got our politicians and government officials to take deadlines more seriously – anything we can do about that?