As always, our staffroom discussion had a hangover from the last question, with Ajitha Paladugu writing in about the teaching of poetry. Bemoaning the common tendency of teachers to ‘guess’ the intent of the poet in writing that poem, Ajitha suggested: “instead, if we begin with the premise that there could be as many interpretations to a poem as there are readers, the myriad possibilities of enriching learning experience infuses so much energy in the class that it transforms the classroom landscape all together.” She cited some strategies, among which was her emphasis on “the importance of making a personal connection with the poem which can happen only if they allow the poem to ‘speak’ to them by trying to relate to the experience described so succinctly – or the predominant thought/emotion coursing through the poem when the theme is universal in nature.”

While Ajitha had a lot more to say, we turn now to the discussion which veered around Indrani Barua’s question:
Have you ever had a child in your class who is intelligent, doesn’t like rules, has very definite views on everything, a leader, likes others to play with him as he wishes, not a very cooperative child when it comes to teamwork, full of mischief whenever bored, instigates others to mischief for fun?

Her question drew several interesting and varied responses. While all respondents admitted that they had found such children to be challenging, Sitalakshmi Natarajan’s response revealed the demand that such a child could make on a teacher, in terms of her own preparation and planning. “I think we, as teachers, are no strangers to the kind of pupil Indrani is talking about. Such children are delightfully challenging: they are the ones you need in a classroom to tickle, sustain, replenish, and rejuvenate ours as well as the other children’s energies and creative juices. However, we need to be better prepared with enrichment work (keeping in mind such students in our lesson plans), find ways of roping them in right at the beginning of the class with leading questions, activities and strategies to keep them involved without giving them the space to disturb the proceedings of the classroom. At the same time, some space needs to be created for them to be on their own with tasks such as extra reading, library time, hands-on activities, little bits of extra research work to be done by them on topics being taught, getting them to help their friends in some capacity, etc. With proper planning these are the children who will help the teacher (indirectly) deliver the goods and assist others in the learning process… not an easy task but worth the effort.” 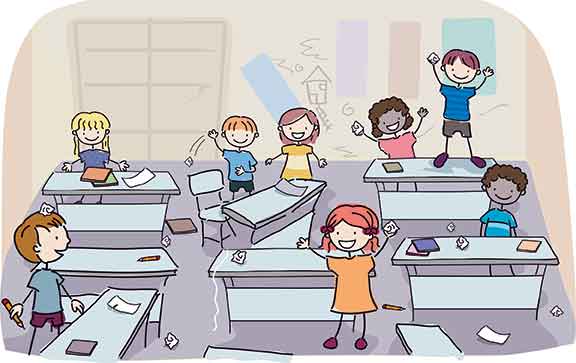 Sneha Chowdhary concurred with Sitalakshmi, as she pointed out the need to challenge such a child: “If you could make him in charge of some duties and project him in the leading role, I think that should help.” Kamala Anilkumar was of a similar view, as she wrote: “Once in a way, give the child a responsibility in the classroom [which is not a routine one] like taking a message from you to the Principal or to the office, make an announcement in the class or in the assembly or help you organize the display board, etc.” She went on to add: “I have observed that these children resist routine responsibilities.” From her own experience, she suggested: “Ask the child to teach some other child who does not know something that this child knows well. E.g., I had asked this child to point out to another child who was reversing some numbers and letters of the alphabet. Realizing that he writes it correctly made him take up this responsibility seriously.”

In alignment with these responses, Shilpa Bansal had this to say: “I believe the best method to handle such hyper over active (and usually intelligent) children is to divert their energies. Keep them occupied with some task along with the regular teaching. The diversion could be to assist the teacher, or collect copies… Appreciate their curiosity and involve the class to answer the question. Never ever laugh or make fun of such children.” Her cautionary advice was followed with the warning that this could “shut the student’s curiosity or make them self-conscious.”
[Even as she wrote the above, Shilpa acknowledged the factor of student-to-teacher ratio: “It is however very difficult to cater to such students when a teacher is handling more than 40 students in a batch.”]

Sumitha Nath Raghavan expressed a similar view: “The child (if there are no diagnosed special needs) can be given short tasks and classroom responsibilities to keep him engaged. If he finishes the task, before he gets time to do his own thing, ask him to erase the board or collect the books. The teacher could also use his favourite toy, game/book as a re-inforcer, to get him to follow the classroom expectations. First, the expectation has to be stated, in simple language, demonstrated, if need be in a measurable way and in a neutral tone. A child-friendly timer or sand clock can be used to help the child understand the abstract concept of time.” She went on to add: “Positive reinforcement when he’s engaging in appropriate behaviour, will help motivate him to follow the behaviour regularly.”

Kamala Anilkumar was in synchrony with regard to stating expectations, as she wrote: “It is necessary to set boundaries for the child and keep reminding him about it whenever he chooses to disregard this. However, the boundaries must be set with her/him being a part of the process. Explaining to – or recalling with – the child the contexts/situations where she had previously disrupted learning activities, then say that you are setting boundaries so that disruption does not happen. This may be done individually first, and then, in the class by asking the classmates to remind her whenever she creates trouble.” Elaborating further on her strategy of roping in peer support, she added: “Often, these children will have a friend who also joins in the fray. If there is one, both should have a ‘setting the boundaries’ session with the teacher. Tell them that they both have to be responsible for each other and that one should stop the other from disrupting the class/activity. When the class begins, it is good to get the two to recap – sometimes in private and sometimes in the group – your expectations of their [the duo’s] participation in the class. This will also make other potential mischief makers more aware of their responsibilities. Of course, this should not be done routinely – like taking attendance! It could be in jest or as a private reminder…sometimes a reminder for the whole class, instead of pointing out only to this child.”

Vineeta Sood set the tone for the second part of this discussion, as she probed the source of this child’s behaviour: “I am not sure what is being called ‘mischief’ here. Many a time, we call their natural playfulness ‘mischief’, as it does not fit into our agenda. Can we include the playfulness of a five year old into our agenda? I always find that they welcome you into their world if you relate to them without any judgment, accepting that whatever way they are responding, there must be a reason for it.”

In our next installment of this discussion, we go more deeply into the likely causes of such behaviour, with examples from the teacher’s own experiences. Meanwhile, do think about our next question for discussion in the staffroom.

Ajitha Paladugu of Delhi Public School, Coimbatore has posed the following question: Going by the limitations faced by teachers – some of which are intrinsic and self-imposed, some imposed by the demands of society and others due to the lacunae and flaws in our education system itself – is the concept of holistic education a utopian dream? How do educators go beyond making students literate and skilled and launch them on the path of self- discovery leading towards self-actualization? Where do we begin in this noble endeavour to impart “education” in the real sense of the word?

Send in your responses to [email protected] (kindly note the change in email address) to join this discussion!