The fan, it is widely believed, was first used by the Egyptians. Ancient Egyptian reliefs and tombs depict Egyptian pharaohs flanked by slaves holding fans shaped like discs attached to long handles. Inspiration for the earliest fans came from leaves or bird feathers. Associated with kings, fans quickly became a part of regal and religious ceremonies of not just the Egyptian but other early civilisations as well. 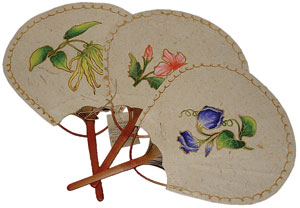 But perhaps nowhere did the fan gain as much importance as it did in China and Japan. These countries had different types of fans for the different classes in society. And in Japan distinctive fans were designed to be used in different places. Thus, the fans of courtiers were different from the fans carried by the warrior caste, and the fans brought to a tea ceremony were different from those taken to a theatre.

The rigid fan (a fan with a stick for a handle and a rigid leaf) was the most common type in China untilthe Japanese folding fans came into fashion during the Ming dynasty (1368-1644). There are no actual records of when the Japanese first thought of the folding fan, but it may have been around the 7th century. With the importance that was accorded to fans in China and Japan it is not surprising that they spent a lot of time making them. Fans were made out of silk, paper, sandalwood, tortoise shell and mother of pearl.

The folding fans reached Europe during the Middle Ages, when the Portuguese discovered the sea route to China in the 15th century. By the 17th century, fans became a rage in the West and several new designs began to originate from here. However, after 1900, hand fans began to die out both as fashion accessories and air cooling instruments as mechanical fans began making their appearance.

The Industrial Revolution has given birth to many inventions that are still in use today. The first mechanical fans were also a product of this revolution. In the early 1800s, the industrial fan was invented. This fan was powered by a factory waterwheel (a machine used to generate power from flowing water). Several similar fans, with slight variations, were invented mainly for industrial purposes. Fans for personal use began to be made only in the late 1800s. The first of such fans was introduced by Schuyler Skaats Wheeler, an American engineer. His two-blade electric fan was also the first table fan. In 1882, Philip H Diehl, a German settled in America, invented the ceiling fan. During the 1920s, when industrial advances allowed steel to be mass produced, fans became more affordable and were no longer something that only the rich used. In the 20th century, the ubiquitous ceiling fan became the best means of cooling oneself. However, with the temperature continually on the rise in the 21st century, the fans are making way for air conditioners both in offices and homes. 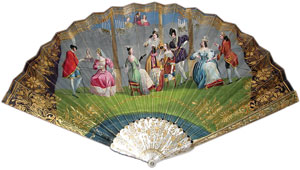 The popularity of air conditioners has not yet sounded the death knell for fans. We continue to use fans not just to cool ourselves, but also to cool our machines. Electronic devices like computers, hair dryers, automotive engines and ironically even air conditioners come fitted with small fans to cool the circuits inside. And despite what might appear to be a bleak situation for the fan, the ceiling fan of old is getting a makeover. Ceiling fans come in a variety of sizes, shapes and colours today. It is not just the designs that are new, but new functions are being found for the ceiling fan. If until yesterday, fans were by and large used to cool the air, today fans also give you the option of distributing heat in colder months. There are fans that come attached with lights that can be set at different settings using a remote control. There are even fans with a single blade available! These futuristic looking fans are called sycamore fans as they are shaped like a sycamore seed. Fans are also being specifically designed for wet or damp areas like the kitchen and the bathroom. These fans are made out of materials that can resist moisture and rust. Toy fans that operate using batteries are also becoming popular.

Hand fans too have made a comeback. They are becoming popular as decorative items and as souvenirs given away at weddings. Made out of anything from paper to mother of pearl and intricately carved or artistically designed, hand fans are being cleverly used to beautify homes. As wedding souvenirs too, they are being used in different ways. Scented fans that diffuse pleasing aromas when fanned, fans with the wedding programme inscribed on them to keep guests both cool and informed, personalised fans with the name of the person it is being given to are some examples.

Over the years, fans have been used in ingenious ways by man. Perhaps one of the most interesting and unique use to which the fan was put wascommunication. Yes, there was a language of the fan! Used by lovers, the language of the fan dates back to 18th century Europe when young men and women were not allowed to freely mix with each other. As hand fans were popular fashion accessories during this period, they became the best means for women to secretly communicate messages to their lovers.

Here is a sample of how the fan was used to convey messages:

There were similar gestures designed to mean other things like I hate you, I can’t marry you, see you soon, etc. As you can see, an entire language was built around the fan.

Ceiling fans, table fans and hand fans are common knowledge. Here are a few other types of fans:

Pedestal fan: A pedestal fan rests on an extendable pole that can be moved up or down for maximum comfort.

Exhaust fan: An exhaust fan is used to eliminate odours. Used in kitchens and bathrooms, the exhaust fan has rotating blades encased in a square covering. This fan draws in the air from one side and expels it out the other.

Misting fan: Misting fans work on the principle of evaporative cooling. Using built-in water pumps and nozzles it creates mist to cool its surroundings. Misting fans are typically used to cool large groups of people in stadiums or any other outdoor arena.

Whole house fan: A whole house fan is a perfect ventilating device. It draws into the home cool air from outside and exhausts the hot air inside through the attic.