Appreciation of one’s work, especially in the creative field, is extremely important. It spurs us to do better work. Awards, accolades and honours are some of the ways in which we show our appreciation to bodies of work that are inspirational, educative and thought provoking. While the Nobel Prize for literature, the Man Booker Prize and the Pulitzer are common knowledge, there are a hundred other literary awards that we are not aware of. Here is small list of some of the lesser known but equally prestigious literary awards presented across a range of literary fields. Read this along with your class and get your students to find out about more such awards. Get them to find out about literary prizes given in India, or those meant for children’s fiction, for instance. You could give them quizzes based on this information, discuss the advantages and disadvantages of giving awards, or even start your own literary award in school. Talk about the politics of awards and the standards they set – this is bound to generate a lot of discussion! 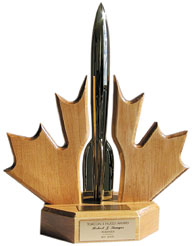 The Hugo Award named after Hugo Gernsback, the Luxembourg American inventor, writer and publisher, is given away every year to the best science fiction or fantasy work of the year before. Awarded by the World Science Fiction Society, it was first called the Annual Science Fiction Achievement Award. Hugo Award was the unofficial name. The Society decided to formally call it the Hugo Award in honour of the Luxembourg American whose contribution to the genre of science fiction is so valuable that he along with H G Wells and Jules Verne is called “The Father of Science Fiction”. The award is given away at the World Science Fiction Convention every year.

The Thanks for the Book Award has been presented since 1966 to a work of fiction that has helped further interest in Finnish literature. The book should have been written either in Finnish or in Swedish to be eligible for the award. The award is given away jointly by the Organisation of Booksellers’ Association of Finland and the Finnish Library Association.

The Nestle Children’s Book Prize was established in 1985 and is today one of the UK’s longest running literary awards. Since its inception, Nestle has sponsored the award with the aim of stirring interest in children’s books and encouraging children to read. The award is unique in that the winner is decided by children across the United Kingdom. A panel of judges shortlists books for the award from which children in the UK vote for the first, second and third place. The prize is given away by Book Trust, a charity which promotes books and reading. The award has helped launch the career of many a writer of children’s books including J K Rowling.

Established in 1976, the Harold Morton Landon Translation Award recognises a work of poetry translated from any language into English. The prize is awarded only to translators living in the United States. Books that primarily consist of poetry, have at least 40 pages and a print run of 500 copies in theUnited States alone are eligible for the prize. The prize is administered by the Academy of American Poets, an association set up in 1934 to support American poets and to further interest in poetry. Originally a biannual award, the Harold Morton Landon Translation Award became an annual prize from 1987. The winners receive $1000 as prize money.

One of America’s more prestigious awards, the Pushcart Prize, awards the best “poetry, short fiction, essays or literary whatnot” published by small presses or publishers with annual sales below a certain level. Editors of magazines and small book presses are invited to nominate work they have published every year. In existence since 1976, the prize is given away by the Pushcart press, a publishing house established in 1972.

Yomiuri Shinbun, the Japanese newspaper founded the Yomiuri Prize for Literature in 1948 as a part of its efforts to transform Japan into a “cultural nation”. The award recognises the best in Japanese fiction, plays, essays and travel journalism, criticism and biography, poetry, and academic studies and translation. The winner receives 1 million Japanese Yen and an ink stone. An ink stone is a traditional Chinese artifact that was devised to grind and store ink. Chinese ink was solidified into sticks for easy transport and the ink stone was used to liquefy ink to make it usable.

And then there are prizes of another kind – for work that showcases the worst, rather than the best! The Bulwer-Lytton award is one of these, sponsored by the English Department at San Jose State University and first given in 1983. This is a whimsical literary contest that challenges writers to come up with an opening sentence for the worst of all possible novels!