In a government school in Mumbai, the teacher was taking a class on cleanliness and the indicators of hygiene were to have a bath every day, brush your teeth daily, wear a clean dress to school and many more. She then asked the class, ‘How many of you have had a bath today?’ Many hands went up eagerly hoping to get the approval of the teacher. There were two children who sat with their eyes fixed on the ground, shy to look up. The teacher asked, ‘Have you both come to school without a bath?’ At this, the entire class started jeering and shouting that they were stinking and the class moved away from these children. The teacher asked the children to keep quiet and then continued with the lesson that everybody should come to school after a bath. The children never went to school again. Little did the teacher know that these children were living in slums where there was no clean water even to drink. 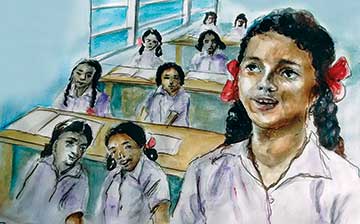 Karthika a student from the Irula community spoke of her belief in ghosts. She narrated a story where the people of her village believed that a wind blew from the village towards the forest and that that was a ghost. The fear of the ghost prevented people from going into the forest at night. The class laughed at her belief in ghosts and mocked her beliefs as unscientific and superstitious. The children are unaware that Irulas are known to be exceptional healers and keepers of the traditional knowledge of the flora in the forest. Irulas are an example of a culture that has preserved a highly diverse ecosystem that sustains their healthy lifestyles.

During my school days we had a subject called moral science in which a story would be read out in the class and all the stories ended with a moral. These morals had the tone of an authoritative warning or order, like: ‘Do not judge always by appearance’, ‘the reward of disobedience is grief’, ‘a wise man thinks before he speaks’, or ‘honesty is the best policy’. Today moral science has been replaced by ‘life skills education’ whose objective is to equip students with value enhanced life skills. The change in nomenclature signifies that values such as fairness, justice, empathy, cooperation in joint enterprise are now seen as means to an end. For e.g., reading storybooks improves your vocabulary or fluency of language (it is not for the intrinsic joy of reading where one is submerged in the plot and has a vicarious experience). Can human values like empathy, compassion, truth-telling, helping others in need be taught as a separate unit of education or should the whole of education be integral to these values?

The position paper on the aims of education in NCF 2005 states that if one of the aims of education is self-discovery, then it is possible to know the inner self only through the knowledge of the other. This would require one to be empathetic and understand the perspectives of the other. In the guide to key terms ‘Philosophy of Education – The Key Concepts’ (Winch & Gingell, 2008), the authors speak of the influence of the aims of education on the curriculum, pedagogy and assessment in the education system, and the aims are given visible form in the everyday practices of teachers and students. However, values like empathy, compassion and fairness are not value enhancing life skills, they are life itself, they are not one of the ‘subjects’ in education, but the whole of education (NCERT, 2017). So, how does the teacher enable this environment of empathy so that the inner self is continuously being revealed to the child? Is empathy learnable? And how do children practice these values in the space of the classroom, thus bridging the gap that exists between the self and the other?

As a teacher of social science, I encourage children to understand the perspectives and reasons which inspired historical personalities to act the way they did at that point of time. But would this mean being empathetic? Krishna Kumar (Kumar, 2001) in his book ‘Prejudice and Pride’ points out the subtle difference between perspective taking and the feeling of empathy. In empathy, there is emotional identification which leads to feelings of compassion. However, perspective taking may be a cognitive state or the ability to visualize an alternative point of view by imagining oneself in another person’s place or situation. In Speaking Volumes – Religion and Teaching History in India (Levknecht & Ramanathan, September 9, 2006), the authors talk of how education is used to alter people’s perspectives regarding religion and cultures that are different from our own. The pedagogy of the textbooks is inextricably linked to the teaching style of the teacher. Textbooks are viewed as the storehouse of all truths and evidence. Even in the current atmosphere where there is undue emphasis on transmission and accumulation of facts, teachers with their own interpretations, recounting of anecdotes from their own experience and mindfulness of the background of the children in the class can transform texts and make ample room for empathy and compassion.

I was conducting a group discussion with children of class VIII on their understanding of the caste system and its perpetration in our society. I devised a game for the children to play for which all the tall children had to sit in the front rows and the others behind. Then I asked all the children to look at about 20 things laid out on the table and recollect what they saw. The children who could see the most were those in the front row. I then asked them if the game had been fair. The children expressed the inherent unfairness in the rules of the game and my response was ‘I can see that you find it frustrating when the rules of the game are unjust.’ With this background, I started the discussion on the chapter and to understand how children relate to the caste-system I prepared a few scenarios that are close to their everyday experiences. I read out each scenario and then we discussed it. The first one was

These scenarios provided the possibilities of questioning everyday situations in our lives and the social structure and create avenues for expressing feelings of discontent and injustice. All empathy building is best nurtured when there is a conversation and discussion in the classroom. 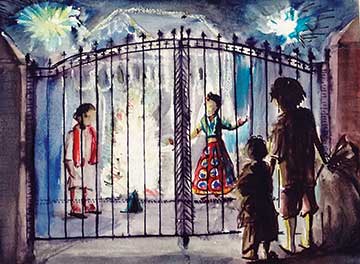 A moral science class with an authoritarian monologue breaks all bridges between the experiences of children in the real world and the teachings in the school. In my class there was a 10 year old girl with special needs. One day the girl’s mother complained that a group of girls from the class had bullied her during the lunch recess. When I met the class, I narrated a similar incident of bullying as though it was a story. I then asked the children if what the characters in the story did was fair. The entire class had participated in inquiring ‘why did the group bully?’, ‘how would the group feel if they were bullied by somebody stronger than them?’, ‘what could be their criteria for choosing the target for bullying?’, ‘was it somebody physically weak, was it because she was a girl or was it because she had capacities and skills that were different from what they had?’ The children explored possible reasons with new questions emerging to understand the view point of both the bully and the bullied. The group of girls who had bullied owned up to the act and apologized for their inappropriate behaviour. After this session, the class, myself included, emerged using our energies in reactivating the process of thinking and feeling. There was a feeling of liberation which the children and I experienced. I am yet to find a word to define it. Children face moral dilemmas and this process of inquiry helps them confront issues, think aloud and have conversations with themselves without the fear of shame or guilt.

Children develop their identity during the course of their interaction with parents, teachers and older people in the community. A child reciprocates empathy when she has experienced empathy herself. When the teacher understands why a child has not had bath or not had breakfast before coming to school, then the whole class learns to build empathy for one another. The teacher’s genuine interest in the child is positively sensed by the children and thereby the values of empathy and compassion are modelled for reciprocation. There is the tightrope walking that the teacher does here like a trapeze artist as at times children feel shame and guilt in openly discussing situations that make them stand out from the rest of the class. In feelings of sympathy, the power equations between the sympathiser and the vulnerable are unequal and there is a reduction in the self-esteem of the student.

Empathy, like most other values of fairness, truth and compassion, needs continuous reinforcement and the teacher is presented with ample opportunities in the classroom. When a teacher tries to understand the ‘whys’ of children’s actions, then the floodgates of emotions are opened and children learn to express empathy.

The crucible of empathy is tested when we have to deal with differences of language, culture, caste, food habits, skin colour and gender. When a teacher respects and acknowledges the cultural differences, then children appreciate ways of life other than their own and reciprocate the same feelings. In a science textbook in Malayalam, there is the usage of the extremely sanskritized word drishti gocharmallaatha (that which cannot be seen through the eye). The children who speak the maapila dialect found it difficult to conceive the idea in their mind. But when the teacher used the word ‘kaNNondu kaaNanpattatha’ which is the common usage and has the same meaning as the sanskritized version, she mediated the text recognizing the differences of language. When the teacher disregards differences and engages in the drill of grammatical rules and enforces prescribed usage patterns, it results in the breakdown of meaningful learning for the children.

In order to create an empathetic school space, it would call for representative practices from the marginal cultures. Building empathy for people different from our views and facing challenges that are very different from ours is done best by listening to the experiences of others. One day a teacher was discussing the routine of some of the children before they came to school. A seven year old girl stood up and told the class that she collects five pots of water from the well in the village for use at home and she also finishes cooking for the afternoon before leaving for school. Listening to experiences different from one’s own encourages children to provide emotional support to one another.

Most values need to be embedded in the teaching and learning strategies by acknowledging the child’s experience in the community. Rejecting or ignoring her lived experiences would burn bridges in the empathy building exercise. Acknowledgement and appreciation of cultural diversity would be one of the foundational pillars of this life-long project. The means and the end in moral matters of empathy, compassion and justice are inviolable and any dichotomy is fallacious.

The author is a teacher and her writings are ways to evaluate and analyze her own practices. She can be reached at [email protected].

Do you feel what I feel?
Exercising the empathic muscules – artfully