School bags may inflect evolution of humankind in an unimaginable way. Maybe the next generations will be born with a small pouch-like opening on their backs to get used to attending school early on. And it would grow and become bigger to accommodate the various things they carry to school apart from books and notebooks. Soon this “natural pouch” would come to replace the school bag. But just like other physical features, this feature may not be the same for everyone. For some it may be perfect, with enough space to carry things of use. For others it may be too loose or large, and things may often fall out of it. It’s also possible that some may have a closed pouch that may need to be surgically opened. Others may choose to undergo cosmetic surgery to enhance the look and style of this pouch and turn it into a laptop carrier. Then depending on when college starts, they can pierce it, tattoo it or add a zipper. 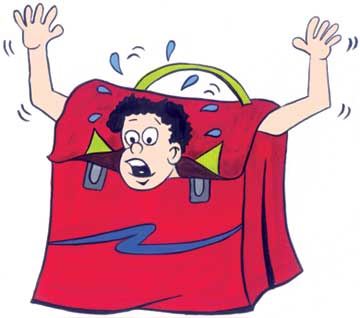 This might jeopardise the business prospects of bag manufacturers and companies. They may find their production capacity underutilised as their bags – tailored to give children a big hunch – would become obsolete. The bags get bigger every day: meant to provide space for books and notebooks, all of which are not even used every day, they are a student’s nightmare. The size of the bag grows as the child grows and sometimes overtakes it. The sight of a little child carrying a bag bigger than herself is similar to the laborious ant that is naturally gifted to carry more weight than it size appears to allow. Sometimes one can only see the little head bobbing above and legs sticking out below while the rest of the body disappears behind a bag.

Perhaps this is another turn evolution might take. Disappearance of school children behind their giant school bags! Just like dinosaurs disappeared 65 million years ago. Palaeontologists are still struggling to explain the phenomenon; school children might meet a similar fate. If this happens, then there is further economic loss waiting for us. Schools would lose out on their regular customers – the children and teachers would find themselves out of work. They would also not have readily available outlets to vent their deep-seated frustrations and anxieties. The blame game would stop and school would become a very boring place. If one wants to look at the faint silver lining in the dark cloud, national violence rates among children affected by classroom punishments and thrashings would plummet. The transport companies plying buses and rickshaws would start their own lobby in a bid to recover their losses.

The least affected would probably be parents who may not even notice this sudden disappearance until after a few days of its occurrence. For the first few days, they might be led to believe that their children have been at school all this while, given the rigours of contemporary education. They might panic slightly, later on, worried about their little proud investments. But schools in all likelihood would hold a press conference to assure people of the safety of their children being detained for special classes to nurture their magical talents.

In the meantime, school bags would wait in anticipation to swallow more children.