I facilitate workshops with children and adults on topics related to gender and sexuality. The organizations that invite me to do this work often have a clear mandate. They want me to sensitize boys and men, hoping that this one-off training will keep them from disrespecting and harassing girls and women.

The initial expectation is that I talk about consent and boundaries, make my audience examine their behaviour, and give them concrete tips to improve their conduct. In order to break the monotony, my hosts want me to keep the session interactive, fun-filled and provocative. At the same time, they also expect deep inner shifts that would validate their decision of hosting the workshop in the first place.

How do I manage these demands placed on me? First, I do not believe in the idea that all boys and men are potential rapists. Second, I like to get to know the workshop participants by eliciting their opinions through games, activities or discussions. Third, I stay aware of the fact that people experience discrimination and violence due to their religion, caste, ethnicity and class, not only their gender identity or sexual orientation.

In May 2020, I observed a renewed interest on social media in thinking critically about how boys are being raised in our society. These conversations grew out of the utter shock and dismay parents, educators and activists experienced after learning about ‘Bois Locker Room’, an Instagram group chat where teenage boys from Delhi and Noida shared photographs of girls without their consent, sexually objectified them, and talked about their rape fantasies.

Outrage is a good starting point but beneficial only when channelized in a constructive direction. Ranting enough about something will not make it go away. We have to do the challenging work required of us if we want to transform the social structures that we find unfair, unjust and unbearable. Let us get into it. 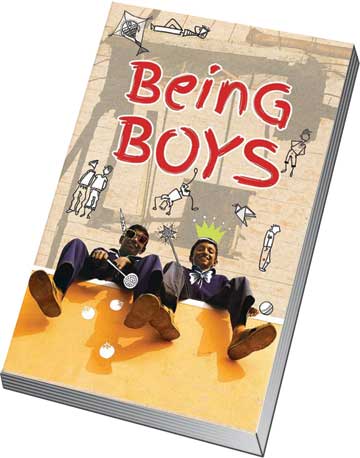 Being Boys, a collection of stories edited by Deeya Nayar and Radhika Menon, is an excellent resource to understand the varied experiences of boys instead of assuming that all of them are entitled brats with a life of privilege, holding unlimited power to harm others, and able to get away without any accountability. Misogyny exists, and so do casteism, homophobia and racism.

Amandeep Sandhu’s story, titled ‘Rinku’s Hair’, is about an 11-year-old Sikh boy in Bengaluru. He and his 13-year-old sister Pinku are the only Sikh children in their school. The boys in Rinku’s class are bullies. They have nicknames for him: Candy, Babe, Chica, and some more. He hates them and the city he lives in.

Sandhu writes, “Almost every day, the boys in his class would pull at the top-knot his hair was tied in, covered with a small white handkerchief. His hair would tumble out and the tease would begin: Girlie, girlie!” Rinku wanted to cut his long hair but his mother did not allow him to do that. “Beta, we are Sikhs. We grow our hair long,” she said.

This story offers a moving example of how boys torment other boys, and also how religious minorities are targeted. Being called a girl is made out to be the worst kind of insult for a boy. Not only does this diminish his own self-esteem, it also makes him believe that girls are inferior and the only way to earn respect is to be like other boys.

Thankfully, his grandfather suggests a new way of looking at the problem. Dadaji says, “The bullies will never accept you, beta. A bully will always find ways to harass you. If not about your hair, then about how you look, or how many cars you have…anything.” The talk with Dadaji helps him find inner strength.

Dadaji teaches Rinku how to wear a patka, a square piece of cloth, and secure it tightly around his head so that bullies would be unable to remove it. He also learns to use his new found confidence to support Karim, a Muslim boy who has recently joined the school and is teased for wearing a topi on his head.

How many adults have such heartfelt and mature interactions with children? It is not unusual to come across parents who tell their sons to hit back or teachers who shame boys for crying. Instead of providing comfort, they add to the trauma. In such cases, boys do not feel safe either at school or at home.

Vikram Seth’s story, titled ‘On Founder’s Day’, provides rich insights into the emotional lives of boys sent to boarding schools at a young age. The narrator recalls his experience as a six-year-old boy: “I remember being left by my mother in the care of strangers… and feeling both indignant and disbelieving that she could dream of going back to Patna without me.”

Interestingly, the mother alone is held responsible for this abandonment. The father is not. Do educators reinforce this while engaging with students at school? How often do schools contact a boy’s mother – rather than the father – to report misbehaviour, or the fact that a boy has got injured on the playground? Is this gender bias passed on to the students?

Seth writes, “Just before dinner every day, we new boys would be led to a bench near the hospital, and there, overlooking the playing field, we would sit. One boy would begin sobbing, and then another, and then we would all join in, weeping in concert for half an hour until we were quite hungry, and could be led gently away to be fed.”

This story urges readers to think about how the emotional distance affects the minds and hearts of the boys. Seth suggests that they do become independent of their parents but also emotionally insecure, and this makes them desperate “to conform to their peer group, to seek popularity among their companions, and to appear as tough and cool as possible and as brutal as possible to those who are outside the group or younger than themselves.”

The cut-throat competition in adult workplaces does not come out of thin air. Boys pick up cues from the adults around them as they grow up. They emulate parents and teachers whose conduct gives the impression that respect can be gained only by dominating others, hurling abuses at subordinates and creating a laughing stock out of people who cannot defend themselves. They learn that they need to be rude and brash to be successful.

Siddalingaiah’s story ‘The Haunted Sampige Tree’ revolves around a Dalit boy who is forcibly admitted to a government school because his parents want him to study. He lives in a hostel opposite a police station. At night, the children hear disturbing cries from the police station where the cops beat up people in custody.

The narrator describes his friendship with a boy at school who invites him home at times. He says, “Although it was an orthodox household, everyone in the family spoke to me with affection. His mother gave me delicious things to eat. One day, I noticed that they kept my plate in a separate corner outside. I was disconcerted.”

When the Dalit boy realizes that the family’s fondness for him does not make them give up casteist traditions built around ideas of purity and pollution, he stops visiting their house. His friend is heartbroken. He does not endorse his family’s behaviour but he is too young to challenge them.

While designing a gender sensitization workshop or a sexuality education module, can educators remember to not make generalizations about the experiences of boys and girls? Can they ensure that the session honours participants’ lived realities, and is not built on theoretical frameworks that are completely out of touch with the immediate context?

Devika Cariapa’s story, titled ‘The Ugly Boy’, addresses the body shaming that boys have to go through. The first few pages of it shed light on the childhood of Ashoka, the Indian emperor of the Maurya dynasty, whose father Bindusara apparently thought of him as so ugly that he did not want to see the child’s face. This was immensely hurtful.

The author writes, “But the young Ashoka did not cry. He refused to let the tears fall from his eyes. Over the years, those tears turned into a hard lump of bitterness in his throat which spread through his body like a slow poison, making him angry. And this anger made him want to be cruel.” Later in life, he killed all his half-brothers who were political rivals claiming the throne.

This story alerts readers to the dangers of characterizing some boys and men as irredeemable. Can educators and parents find ways to engage compassionately with boys who are seen as ‘trouble’? What needs of theirs are unmet at home and in school? Why do they have so much rage inside them? Which aspects of their personalities feel unloved? What is hurting them so much that they want to hurt everyone else?

The point of asking these questions is not to absolve these boys of their violence. It might be helpful to get at the root cause of something instead of attending only to the most visible manifestation of it. If a person has learnt to get what he wants only by snatching, there must be a reason behind this.

Kanak Shashi’s story, titled ‘Guthli Has Wings’, is about the struggle of a transgender child to find acceptance at home. Guthli identifies as a girl but Guthli’s family thinks of Guthli as a boy. N. Sudarshan’s story, titled ‘Man Up – It’s Football!’, is about an African American sportsman named Jonathan August Martin who encounters racism in his football team.

Both Guthli and Jonathan go quiet when their identities are not affirmed. Guthli feels sad and alone even amidst the colourful Diwali celebrations when everyone else is happy. Guthli finds solace in talking to trees and baby chickens. Jonathan tries not to display any emotion or to seek help. He spends a lot of time by himself because any kind of complaining would get him labelled a sissy.

This book makes readers aware of the vulnerabilities that boys hide because there are few avenues for them to be heard, and to find support. They are trained to not sit with their feelings or to process them because this would apparently make them more like girls and there would be no worse fate than that. Gender sensitization training must take such experiences into account so that boys can learn how to alleviate their own pain instead of passing it on.

The author is a Mumbai-based educator, writer and researcher with an M.Phil. in English Language Education. He works on projects related to children’s literature, gender justice, queer rights and peace education. He can be reached at [email protected].