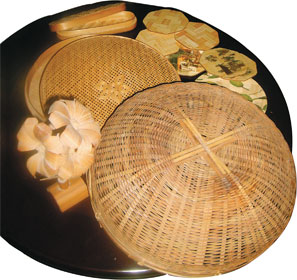 Bamboo is the tallest member of the grass family. Certain varieties can grow up to a 100 feet, while some may stop growing at 1 foot. The bamboo grows almost anywhere from the jungles to the high mountains. For these reasons, it features prominently in human life as a decorative and useful item. In many parts of the world, it is food. In eastern cultures, bamboo shoots are used in a variety of dishes. Where Indonesians use sliced bamboos with thick coconut milk and spices to make a dish called gulai rebung, the Chinese use bamboo as one of the main ingredients in a green-coloured liquor and as wrappers for steamed dumplings called zongzi. Other culinary uses of bamboo include oriental dishes like sayur lodeh (mixed vegetables in coconut milk), lun pia (fried wrapped bamboo shoots with vegetables), bamboo pickle and a sweet wine called Ulanzi. In Asian cultures, bamboo hollows are used to cook steamed rice.

While bamboo is just one of the foods that we eat, it forms almost the entire diet of two species in the world – the Giant Panda and the Red Panda. Because of the lack of variety in their diet, these animals have to eat a lot of bamboo to get a day’s nutrition. The Giant Panda maybe eating for up to 12 hours a day! And it is not just the Panda, other animals too find the bamboo a delicacy. Tender bamboo shoots are fed upon by elephants and mountain gorillas.

Another use that bamboo has for man is as medicine. Traditional Chinese medicine considers bamboo to have a cooling and calming effect and therefore is used to treat ailments like fever, lung inflammation, and cough. The Ayurveda, an Indian system of medicine uses the concretion found in the culms of bamboo known as tabashir or tawashir. Also known as “bamboo manna” in English, this concretion is said to help fight respiratory diseases.

Uses: The fact that bamboo is tall and strong makes it an obvious choice for building. It is often the cheapest material available for constructing houses. Not only are bamboo houses low-cost, they are also durable, environment friendly and resistant to earthquake. There are other structures as well that are made from bamboo today – bridges, churches, restaurants, etc. Many a time bamboo is used to erect scaffolding used on the outside of new buildings that are being built. You can use bamboo not just on the outside but also inside the house. It is one of the most popular decorative items. There are bamboo blinds that can give your home a relaxed and cool look, there is bamboo furniture which can add to the elegance of your home, there are bamboo floors that spread warmth in the house and are easy to clean. There are other accessories that you can add to your home like bamboo carpets, rugs, placemats, lamps, mirrors, utensils, etc. The latest bamboo product that you can bring home is an LCD monitor!

Bamboo also lends itself to making paper, toys, musical instruments and clothes. Flutes are the most common musical instruments made from bamboo. Called Shakuhachi in Japan and Dizi in China, these flutes are used to play classic, jazz and traditional music. In Japan, the Shakuhachi is used by Buddhists as a tool for meditation. There are other musical instruments also made from bamboo like the Angklung, which is a musical instrument made out of two bamboo tubes attached to a bamboo frame. There is also the didgeridoo from Australia. It’s a wind instrument, which is cylindrical or conical in shape measuring anywhere between one and two meters in length. It is also known as the wooden trumpet. Then there are saxophones, drums, and bamboo wind chimes sometimes used as Feng Shui applications in many homes in the East.

Wear Bamboo: If you are looking for clothes to suit both the hot and cold climates then turn your attention to clothes made from bamboo. Bamboo fibre made from treated bamboo pulp is strong and durable and fabric made from this fibre is soft, smooth and comfortable. Its natural breathability allows a bamboo fabric to absorb sweat and circulate air, thereby keeping the wearer cool, dry and odour free for much longer. Another reason to wear bamboo during summer is its ability to cut down the ultra violet rays. The micro-gaps and micro-holes in the bamboo fibre that allow you to stay cool also keep you warm in winter by trapping in warm air.

Bamboo produces an anti-bacteria agent called ‘bamboo kun’ to defend itself from pests, which makes fibre made from bamboo naturally anti-bacterial. This feature of the bamboo makes it most suitable to make innerwear, socks and tight T-shirts. Bamboo clothes are 100 per cent bio-degradable and therefore the most eco-friendly clothes available today. 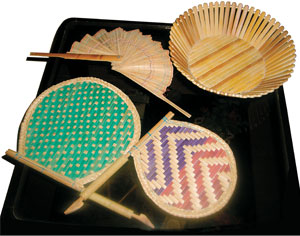 Across Cultures: A Chinese poet once wrote, “Man can live without meat, but he will die without bamboo.” China grows and uses bamboo more than anyone else in the world. In fact, China is called the ‘Kingdom of bamboo’ for the more than 400 varieties of bamboo it grows. It also has the largest area under bamboo cultivation in the world. Bamboo pervaded the everyday life of the Chinese. They used it as firewood, to make tiles, paper, hats, shoes, food, etc. Bamboo has thus played an important part in the development of the Chinese culture. For the Chinese, bamboo is a symbol of longevity due to the plant’s own long life.

In India, bamboo stands for friendship. Since bamboo flowers rarely, its blooming in certain cultures is regarded as a sign of impending famine. A bamboo forest in Japan that surrounds a Shinto shrine acts as a sacred barrier against evil. Vietnamese culture is often regarded synonymous to “bamboo culture” as the plant symbolises the Vietnamese hometown and Vietnamese soul in virtues like optimism, straightforwardness, unity and adaptability. An old proverb in Vietnam sums up bamboo as a symbol of Vietnamese eternity: “When the bamboo is old, the bamboo sprouts appear.”

Environment: Bamboo is the perfect solution for environmental problems that we have today including soil erosion and deforestation. The bamboo has an extensive rhizome system which lies in the top layer of the soil just below the surface. This prevents soil erosion occurring in flood plains, on riverbanks and on steep hills, thus controlling landslides. Another environmental problem that bamboo can help mitigate is pollution caused by greenhouse gas emissions. Bamboo produces more oxygen than any other tree or plant and this means there can be a significant reduction in the carbon dioxide present in the atmosphere if we plant more bamboo in highly polluted areas.

Deforestation is a major problem we are facing today. One of the main reasons for deforestation is the furniture and building material industry. Forests, mainly timber, are cut down to supply to these industries. The bamboo’s qualities of strength, lightweight and flexibility make it a viable alternative to timber.