For over three decades now, alternative schools have been the nuclei of innovations in education. Having deliberately sought to work with marginalized and underprivileged communities in remote and difficult terrains with varied cultures and languages and dialects, these educators have had to struggle and become exceedingly creative in order to make an impact. And succeed they did! If today the country is talking of activity-based learning, joyful learning and the like, they came out of these small, under-equipped, often makeshift classrooms. This is the history of educational innovation whether they refer to the beginnings of Maria Montessori or Tagore or Gandhi or Steiner – they all began in small informal centres and developed their ideas on what ought to be taught.

These educators have not only promoted innovations in education but have also been avid campaigners on universal education and the Right to Education for every child in this country. After 60 dismal years of educational experience it was felt that the government was finally getting its act together with the implementation of the RTE Act. But the Act in its current form gives little promise along these lines. What is worse is that these very campaigners may have to shut down their schools! 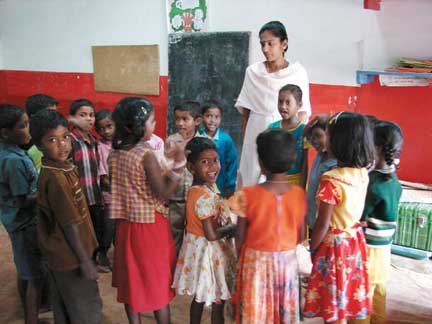 The fear is that the space for alternative schools is going to disappear with the coming of the RTE Act. The Act enjoins all children to attend `formal’ schools – schools recognized by the government, where a prescribed syllabus is rushed through, a set pattern of teaching by teachers trained in the same old methods and who have been responsible for large numbers of drop-outs. Even the National Institute of Open Schooling which has an extremely flexible system called the Open Basic Education Scheme is being withdrawn on the grounds that the children have to go to formal schools only. Innovation, creativity, flexibility, inclusiveness have all been given, it appears, short shrift.

To take a closer look at the RTE Act and its implications, a meeting was called of people involved with alternative schools and homeschoolers on April 18th at Bangalore. Over 50 people attended the meeting. While the apprehensions regarding the Act were discussed it was felt that the concerns of the homeschoolers were somewhat different from those of the alternative schools. Some of the homeschoolers were quite upset that the state thought it could deny them their fundamental right to educate their children the way they wanted especially as they were far better qualified than the average school teacher.

Mr. Sandeep Srivastava who had filed a PIL in the High Court of Delhi challenging RTE 2009 on various grounds inter alia denying children from pursuing home schooling and alternative schooling informed the meeting that the matter was heard by the Division Bench on 13th April and the Bench agreed on the concerns expressed and observed that MHRD ‘might not have thought of this aspect of education’ and hence was adviced to make a representation before MHRD and if the concerns were not rightfully addressed he could approach the court again.

Based on the advice of the High Court it was felt by those who attended the meeting that a joint representation could be made to the MHRD. A group has been working on this and circulating it to a wider public through the Internet. Suggestions that have come in have been incorporated and a final Position Paper is now ready for presentation to the MHRD. Reproduced here are some salient aspects from the Position Paper (the full text is available on www.rte.com).

This is a representation by a group of educators who has been engaged with the running and development of alternative schools. This note attempts to articulate this group’s perspectives on the RTE Act and our concerns with it It also proposes a few suggestions to ensure that …it also preserves the space for the alternative schools – that have played a very important role in supporting the government’s public education system and have been places of innovation and experimentation that have contributed towards extending both the discourse on school education as well as its practice in the classroom.

Alternative and Innovative schools have been efforts that by and large served the marginalized and the underprivileged – scheduled castes, tribal societies, rural poor, urban poor who have migrated to cities etc…. children with special needs and those rejected by mainstream schools because they do not fit in with the standard expectations. These schools are characterized by a non-competitive learning environment, a broader curriculum that is more locally adapted, a more continuous and qualitative assessment, pace of learning that is determined based on a child’s capacity and a more flexible and broader variety of teaching methodologies that are responsive to children’s needs.

These institutions and the people involved with them have also contributed greatly to Indian educational philosophy and policy, teacher development in government schools, curriculum and material development, academic knowledge and research on education and in other projects for improvement of quality of government schools.

The note then goes on to make suggestions for a more flexible approach to the requirements of teacher certification and education; flexibility with curriculum; relaxation of rules with regard to infrastructure; and, makes a strong plea for the continuation of NIOS OBE scheme. For a full version of the document please see www.teacherplus.org.

We have been (pleasantly) taken aback by the number of people from across the country who have become signatories to this document. We are confident that the Ministry will call for a discussion in the near future to consider our suggestions and create the space for innovations that will eventually lead to education for all without compulsion in an atmosphere that is free and creative, both, for the child and the teacher.

The authors are with the Viswa Bharati Vidyodaya Trust, Gudalur. They can be reached at [email protected].