Ahmed Mohammad, a 14 year old boy, living in New York, came into limelight when he brought to school a clock he crafted to show his science teacher. His teacher thought it was a bomb and alerted the police who arrested Ahmed. 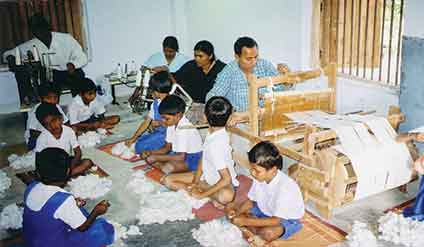 Being a student of education, this incident unsettles me because of the strong presence of unfamiliarity, distrust and fear between the teacher and the student. The teacher-student relationship is the foundation of education; everything else in this scheme is secondary. This incident presents us with a complex problem; it is not something we can brush aside simply blaming the teacher. There is a need to reflect where this fear is originating from.

This fear is an after-effect of the 9/11 terrorist attack in USA. Different countries have responded differently to this fear. The thought that everybody is vulnerable to terrorist attack has not escaped any country. Living in this constant fear is quite alarming and it is affecting people and their relationships like in the case of the teacher and student in the above incident. This fear is rooted in violence and it is breeding violence. If we are at a stage where we think it possible that a teenage boy can bring a bomb to school to kill his classmates and teachers, then maybe it is time to reflect where we are headed.

At this point, one is reminded of Mahatma Gandhi’s idea of Swaraj. In Hind Swaraj, he emphasized on the lived experience of swaraj, to be able to live without fear. He transcends the political boundaries of the meaning of swaraj, by defining it as the rule over self through disciplining one’s mind, body, and spirit, thus individualizing the experience of self-rule. This subsumes three determining factors, which are, a) self-awareness; b) self-discipline; c) self-reliance. A self-aware person will be able to search and follow his/her path of truth. Independence from all kinds of desires and urges will strengthen one’s will to follow this path. This can only come from a disciplined life, which will discipline the mind, body, and spirit. Self-reliance can be achieved through learning to handcraft a product. The more people relied on handcrafted products, the more interdependent society becomes.

These are the origins of nai talim, a scheme of education proposed by Gandhi in 1937 at the All India National Education Conference in Wardha, Maharashtra. He believed that providing education through the teaching of craft would facilitate in developing a child’s mind, body, and spirit. It would facilitate in experiencing swaraj, that is, living without fear. Four resolutions were passed at this conference, which were:

It would be worthwhile to examine the relevance of nai talim in todays’s fear-stricken times. To do this, I want to take you to Anand Niketan, a school in Sewagram ashram, Wardha, Maharashtra where nai talim is being implemented.

Anand Niketan
Approximately 500 meters from the Sewagram village intersection begins the boundary of the Gandhi ashram. From the road, one sees a row of cottages in the shade of trees. Listening to the rustling of leaves; the chirping of birds and with your feet covered in sand, the engulfing quiet and the serene surrounding is overwhelming.

Crossing the mud-coloured cottages, I reached the garden, where some class VI students were working on their plots of land. The gardening teacher was helping a student with a large fork that is used to prepare soil, teaching her where to apply pressure so that the fork goes inside the soil. The girl was handling the fork and following his instructions. She was having difficulty in pushing the fork because she was not applying enough pressure at the right point. The teacher stood at the side watching her carefully but also waiting patiently for her to look up to ask for help. Then he would repeat the instruction. While this was going on another student was handling the fork on his own. I asked him what he was doing. He explained that he was preparing the plot for sowing. I asked about the seeds he would be sowing. He replied that he was still thinking. “Spinach takes more time to grow than fenugreek, but then its produce is better and sells more. Last time, I planted spinach,” he said. A student was taking out spinach, another was measuring his produce and some others were watering their plots.

Then I observed a group of students plucking fenugreek from a plot. They were busy talking, I joined them. One of them was talking about the recent appearance of berries on the shrubs near the ashram farms. They were all planning to go there after helping their friend harvest fenugreek from her plot. Then one of the girls got up to get a rope to tie the produce. Another one ran to the school and ashram to inform people about the produce, so that interested buyers could come to buy. A third stood in queue to weigh the produce. The other two were still plucking. As soon as the rope was brought, they took the produce to the weighing scale. Two of them measured while the third jotted down the measured produce in a notebook after which the measured produce was tied up. Soon, a group of teachers arrived to buy fenugreek. Details of sale and purchase were diligently noted. Once this job was completed, the girls ran to the other side of the garden to pluck berries. At this point, I noticed a small rocky gate-like structure on one of the plots. I went and asked about it. A student told me that it was the grave of a frog that was killed in the process of preparing the plot.

The above scene is from a gardening class in Anand Niketan. After the initial set of instructions on how to use a fork to prepare a plot of land, different kinds of seeds and their needs, children work independently on their plots. In the above description, speed and keeping up with other students did not appear to be a concern for anyone. Children took decisions from choosing the seeds to the processes of sowing, watering, and harvesting. There is no right answer or the right way of doing it. They learn by doing. They learn from their failure. Helping each other and working with each other came naturally and it was neither encouraged nor discouraged by their gardening teacher. Not even once did the teacher ask the children to work silently or to focus on their own plots or to do their work. Children took responsibility for the task at hand and did it on their own. 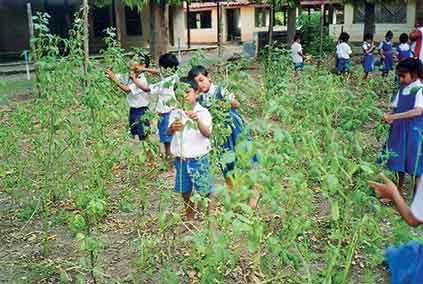 Each plot looks different not only because of the variety of plants sown but also because each child has embellished his/her plot with his/her choice of materials. The thought of making a grave for an animal that died while he was working reflects the student’s relationship with nature, which developed from his gardening experience. The instinct to decorate their plots, to give it an identity also reflects their sense of ownership of their own small plot.

I observed later that the teacher did not encourage all kinds of experiments. He gave them his opinion and let them decide for themselves. A case in point is when one set of children connected their plots with underground pipes, so that they didn’t have to water their individual plots. These pipes facilitated the flow of water from one plot to another. In this experiment, a class VI child told me that he had to make sure that his plot was properly levelled otherwise water would collect at one place and damage the plot. Another class VI boy shared the need to rethink this plan as with water, soil was also entering the pipes resulting in blockage. Thus they had to remove the pipes.

The role of the gardening teacher is to facilitate students in gardening. He was there and guiding the girl on using a fork. He did not intervene until he was asked but he kept a watchful eye on her. As a result the girl engaged with the fork on her own but with the awareness that the teacher is there to support her. The teacher trusted the student’s potential to learn to use the fork and gave her opportunities to work with it on her own after giving a set of instructions. The student was comfortable working and failing to perform in the presence of her teacher and trusted him enough to ask for help after repeated failures. This trust extended to other students as well who took responsibility for their tasks and did not wait for the teacher’s attention to do their work. The teacher was also assured of the same. There was no fear expressed from either side, all of them were comfortably doing their own work. There was another dimension to this teacher-student relationship that is novel to this situation. This was when the teacher assumed the role of a consumer and the student became the producer and seller. This increases their inter-dependence on one another and also makes the student the provider of a food item, which is a basic need of the teacher. So students assume a more important role in this situation. This is a routine activity for the students, so it has implications in their interaction in other classes.

This is the description of just one gardening class in Anand Niketan. Through the practice of gardening, children were learning to exercise their mind, body, and spirit. This particular class seems to indicate that nai talim has the potential to nurture sensitivity, inter-dependence, trust, and fearlessness in children through the teaching of crafts. Can this education help us deal with violence and fear in the present times?

The author is a doctoral student at the Central Institute of Education, University of Delhi. She can be reached at [email protected].