The first is an ‘illiterate’ milk man, by the very common name of Rangan; I have no clue whether he is still alive; chances are that he is no more. He was an inveterate drunkard and often, had to be ‘woken’ up from his stupor in the middle of the afternoon to relieve the ‘udder-full – cows’ of their milk. But this drunkenness notwithstanding, Rangan was amazing. He had never been to school, and did not know how to hold a pencil in his hand. Yet, that hand could cajole the most recalcitrant cow to yield milk. But this was not all! The hand that could milk cows but could not ‘count’ never ever made a mistake with calculations regarding the amount of milk that had to be supplied to people in about 10 houses. A piece of coal was all he used in those days to mark the milk he had given; a wall was his account book! The lady of the house would have to open her diary, add up all the halves, quarters, one and two litres to arrive at the total amount of milk that she had bought. But such ‘counting’ was not for Rangan; his eye would at one glance take in the long and short and not-so -long lines, the different strokes that only he could decipher, and out would come the total! And not once did he make a mistake; 15 minutes after he had ‘pronounced’ the amount, the ‘amma’ of the house would give him the figure and there was never a discrepancy! 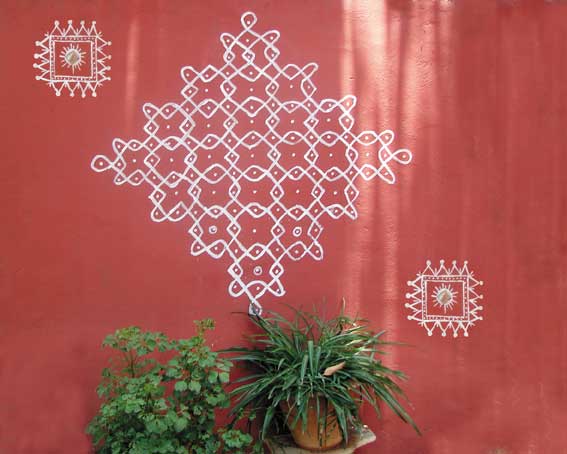 But Rangan had never been to school, did not know how to read or write, was branded illiterate and so, ‘could not have done’ any mathematics!

The second person is a lovely old lady who is no more, by the grand old name of ‘Pattu’. She too, did not know how to read or write and had in her own words, ‘never stepped across the threshold of a school!’ Yet, if you gave Pattu a canvas, (the front court yard of your house) you were in for a visual feast! First, she would ‘look’ at the spaces she had, and in the blink of an eye, the estimate would come “amma, grind two azhaakkus (that is approximately half a kilo) of rice!” This would of course happen one day before the festival. This ground rice, on festive occasions, and rice powder on ordinary days was her ‘medium’.

And then, the day of the kolam creations would dawn; Pattu would turn up either early in the morning, if it was a powder kolam, and the afternoon of the day before the festival if it was a ground rice kolam and then her work would begin. It was a fantastic treat to watch that lady at work; not schooled, never used a protractor or compass or scale, but her kolams always had perspective! Small, medium, or large spaces; narrow, broad, rectangular, square, odd shaped, none of this mattered! The eye would ‘measure’ the space and in accordance with availability, the spaces between the dots would increase or decrease; alternatively, ‘bigger’ and more appropriate kolams would get chosen!

This choice, of course, never came out of a book, but from inside her head! A chariot, a peacock, kolams that had dots and lines and kolams that had only intersecting lines; you name it and she had the designs in her head. The lady is no more, but yet, when I reflect, I can only look and wonder, at how that small ‘unlettered’, head could carry all that information; how that eye could judge space and size and do the needful.

Today, if we want to reduce or enlarge a diagram, we go to the photocopier, and painfully select the percentage, check and by trial and error, get it right! Pattu seemed to have an innate reducer/enlarger in her head! The eye glanced and the hand did! I have spent hours watching the speed and grace with which she worked her magic on courtyards and floors to create these amazing pieces of art; art that got washed out and wiped clean and not preserved, but dexterity, imagination, skill, and talent it definitely exhibited! And what was most important, was that her innate sense of geometry never let her down! She had a steady hand and an amazing eye! Never used a ruler, yet drew straight lines; did not know how to hold and use a compass but her points made perfect arcs! Her circles were picture perfect and her triangles and rectangles and rhombuses would have put any student of geometry to shame! A13 by 8 series of dots with interspacing dots in between, or a 9 by 9 square; … you name it and she could do it, and then, using those coordinates, weave amazing designs.

Yet, being ‘unlettered’ no school would have let her step in and would never have given her a certificate!

I am reminded of the grouch that the students of the Barbiana School have: …that they failed in their gymnastics examination because they could not play basketball. But any one of the children in that school (an unconventional one run by an Italian priest for school drop outs) could climb an oak tee, let go with their hands, and chop off a two hundred pound branch with a hatchet and then drag it through the snow to their mother’s door step! But these children will never get an ‘A’ in gymnastics just as Pattu and Rangan will never get an ‘A’ in mathematics.

The author is Reader, Department of evaluation, EFL Universal, Hyderabad. She can be reached at [email protected].