If there ever was a law against noise, it would be likely that a number of students and researchers in the Indira Gandhi Memorial Library at the Hyderabad Central University would be charged. Where silence is an aberration rather than the norm, the library’s SILENCE, PLEASE! signs gather dust for want of a louder font to scream their point. Wait! Did I say scream? Now that’s ironic, but if you visit the library, you would perhaps want to exercise your lungs once in a while in reaction to what goes on. 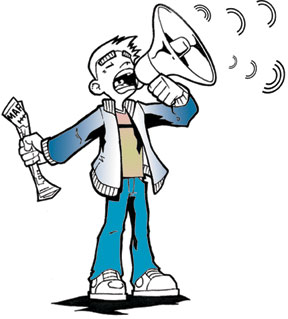 In the wireless zone, where the proud laptop owners sit in a line resembling workers in a cottage industry of sorts, there is usually a lot of high-pitched ‘whispering’. Take for instance this girl who was sitting right at the corner, seemingly busy in arcane scholarly pursuits – except that she wasn’t. She was playing YouTube streams on the Internet without a headphone. Playing the latest songs from Hindi films, she giggled unapologetically though I must add that before accusing her of misusing the library space, she seemed perfectly transported into her living room. So there!

Another boy who sat right in the centre had literally occupied centre-stage. Why was he under my convicting spotlight? Well, firstly he was wearing headphones which meant that the rest of the world stood reduced to a faint murmur. Secondly, he was engrossed in a voice-chat, verging on a fight, with his parents. At one point, it seemed that he would chew up the microphone given the intensity of his aggression. But again, he must be condoned, forwearing headphones can really immunise you to external disturbances and erase all sense of your physical surroundings.

When one can forgive the utterance of human sound much above a whisper in the library, the text chat sound alerts must seem innocuous. The ding-dong of Gmail or Google Talk sound alerts got their own concert as many a user furiously typed away on his or her sleek keyboard. Yahoo Messenger was the second most popular with people playing the latest ‘audibles’, where animated characters spout one-liners in a variety of languages and accents. Of course, these delightful options very understandably cause deafness and blindness to the need for silence, of those who are (actually!) reading and writing. One could also fault the spatial organisation of the library without demarcation between the reading area and the wireless zone.

And why would you tell someone to keep it down? Everyone’s doing it and how! Within the wireless zone are two computers meant for searching the library catalogue. The population of laptop owners increasing at an ‘alarming’ rate is now becoming a menace since there are only limited plug points in the zone. As a result, the moment there are more than five users, the two computers are unplugged to accommodate other laptop plugs. When someone tries to use those computers, they unwittingly keep switching the monitor on and off first wondering (aloud!) why the computers don’t work and then hissing routine curses at the tardy library services. Meanwhile, the laptop generation simpers at their screens oblivious to their ‘digitally-divided’ counterparts who rely on institute facilities.

Laptop users in the HCU library are an eclectic lot with stories to tell and gossip to exchange. Logged into a different reality, they forget that being techno-savvy is not just about knowing the features of their devices but also using them in a way that does not intrude upon others’ space and observes the two words that can be spoken aloud in the library. SILENCE, PLEASE!