All of us know that English has borrowed liberally from other languages like Spanish, French, Latin, Celtic, etc. What is of interest to note, however, is that many of the expressions we use today come from the world of fairy tales; and some of them are the creations of an African slave who lived in Greece some 2500 years ago! Any idea who this person is? Here’s a hint: the tales told by this prolific storyteller gave us expressions like ‘sour grapes’, ‘to cry wolf’, ‘wolf in sheep’s clothing’, etc. If the bulb that went off in your head flashed the name Aesop, then congratulations! You hit the nail on the head.

For someone whose stories are known the world over, there is not much we know about this weaver of stories; the details of his life are rather sketchy. What is known, however, is that he was a slave who served two masters in the island of Samos. Scholars believe ‘Aesop’ may not have been this individual’s actual name. They are of the opinion the name is a corruption of ‘Aethopian’ (sounds a lot like Ethiopian, doesn’t it?), a term used by the Greeks to refer to dark skinned Africans. The story goes that even as a slave, Aesop’s stories kept all those around him thoroughly entertained: his fellow slaves, his master and his guests. His second master was so pleased with his ability to spin yarns that he set him free. Aesop travelled quite extensively before settling down in the court of King Croesus. The legend goes that he met his end when he was thrown off a cliff by an angry mob. I wonder if Aesop was forced to look before he took the fatal leap! 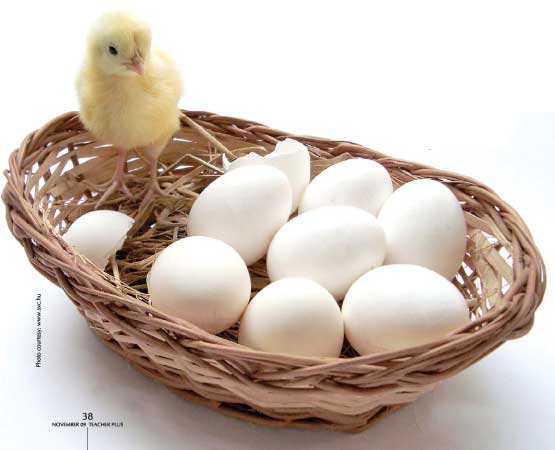 This month’s column will deal with some of the expressions that we get from the tales of Aesop. In many of his stories, animals play the lead character; and what better way to begin the column than by talking about the king of the jungle: the lion! Whenever someone gets the major chunk of something, we say that the person got the ‘lion’s share’. In one of Aesop’s stories, a lion goes hunting with three of his friends – a fox, a donkey, and a wolf. After they make a kill, the lion informs them that the meat will be not shared equally among the four; that he is, in fact, going to keep three fourths of the meat for himself. The reasons he provides for keeping the ‘lion’s share’ are the following: one fourth as his just share for killing the animal, one fourth for his hungry lioness and cubs, and the other one fourth for his courage. The lion then goes on to inform his friends that he is prepared to part with the remaining one fourth, provided one of them challenges him to a fight and defeats him. The fox, donkey and wolf are of course too chicken to take him on, and leave the entire kill to the king of beasts. Before the three realized they had been an ass to make friends with a lion, they probably thought they would be sharing of the meat: they were celebrating prematurely; they were counting their chickens before the eggs hatched. You know what our master storyteller tells people who celebrate prematurely: ‘Don’t count your chickens before the eggs hatch’.

To get this message across, Aesop tells us the story of a woman whose daydreams bring her misery. In the story, a woman is carrying a basket of eggs. While she is walking, she begins to think about how many chicks she will soon have, how much money she’ll make by selling the chicks, the things she’ll buy with all the money, etc. As she is thinking about all this, she drops the basket of eggs! Result? The woman is left with egg on her face!

One cannot accuse Aesop of being a sexist because in his stories both men and women come across as being equally silly. In the case of ‘one swallow does not make a summer’, an expression we use to caution people, it is a man who is left rueing. In this story, a young man sees a swallow on a relatively warm winter day. Since a ‘swallow’ is a bird which is usually seen in summer, the young man concludes that warm weather is around the corner. He is so confident that he proceeds to sell his winter coat, and spend the money on drinks. A few days later, the weather takes a turn for the worse, and the young man, shivering in the cold, realizes that the presence of one swallow does not necessarily imply summer has arrived. Aesop doesn’t tell us if the young man was married; if he had been, his wife would have surely made an already bad situation worse by screaming, ‘I told you not to sell that coat, you idiot!’ Not the words of comfort you wish to hear when you are feeling miserably cold and have a hangover to boot!

Make a situation that is already bad, worse? Isn’t there an expression for that? There certainly is, ‘add insult to injury’. This too comes from one of Aesop’s tales. This time around, the protagonist is an insect; a ‘fly’ to be more precise. In the story, a bald man tries to swat a fly that has landed on his head. He misses the fly and smacks his head instead. The fly tells the man, ‘You wanted to kill me for a mere touch. What will you do to yourself, now that you have added insult to injury?’

And perhaps that is a good point at which to end this tale…lest I suffer the same fate as poor Aesop!