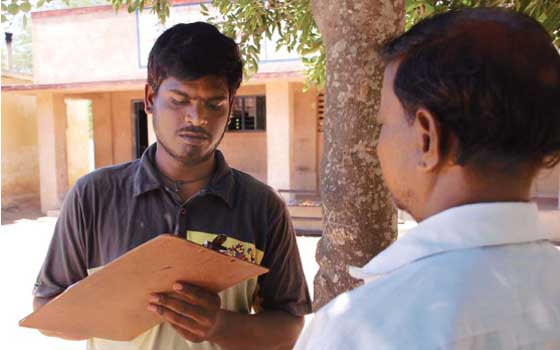 India has made great strides in raising awareness about HIV/AIDS and yet there are considerable gaps in people’s knowledge about the illness and misconceptions abound as to how HIV/AIDS spreads. As a result, people with HIV/AIDS continue to be discriminated against. If people affected by HIV/AIDS have to be accepted by society we need to have better informed communities, so that younger people, particularly children, are armed with the right information and the right attitude to deal with the risk of HIV infection. The National AIDS Control Organization reports that there are 53,000 HIV positive children in our country today. According to UNAIDS, young people starting from their teenage years are at increased risk of contracting the illness, as about one third of the HIV positive cases in our country belong to the age group of 15 to 25 years.

Today, talking about HIV/AIDS to children is not a choice but a pressing need. We need to start a dialogue with children wherever it would be most effective. As with many other health issues the best place to address this most effectively is when children are in school. Teachers, being among the most influential people in a child’s life, are best placed to impart information on HIV/AIDS.

Therefore it becomes crucial that teachers are well informed about HIV/AIDS. Do we know how teachers view HIV/AIDS and related issues? How much do they know about HIV transmission and issues surrounding HIV/AIDS? How do teachers today discuss these matters with their students? Talking about HIV/AIDS also means having to touch upon sex and sexuality – are these issues addressed by teachers in schools? Earlier studies have revealed that knowledge about HIV/AIDS varies amongst teachers in India, as do the practices of imparting sex education in schools. To assess the current situation, Kalanjiyam Trust recently conducted a study among teachers in four districts of South India. The results, which were quite interesting, were presented at the International Congress on AIDS in Asia and the Pacific (ICAAP) held in Indonesia in August 2009. The study involved 100 teachers from urban and rural areas in the four selected districts. The teachers were asked to fill an objective pre-coded questionnaire which elicited their views and practices on life skills and sex education in schools, and assessed their knowledge, views and perceptions of HIV/AIDS and its importance for young people. 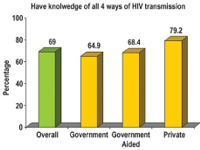 The study found that all teachers were aware of one or more ways in which HIV spreads and 69% of the teachers had knowledge of all the four ways in which the illness spreads. When asked how one could identify whether a person had contracted HIV/AIDS, fewer than one-third of the teachers reported that HIV could only be medically diagnosed through a blood test (31%). About 39% of the teachers were not aware that there were drugs to treat those affected by HIV/AIDS and 18% reported they were not sure or did not respond. Though 43% were aware of drugs to treat people affected by HIV/AIDS, few (18%) were able to name them or the treatment (ART).

There were misconceptions about how HIV spreads among 16% of the teachers. The most common misconception was that HIV can be cured (27%). But there were others as well. For instance, 14% believed that HIV spreads through sneezing, coughing or spitting, 13% said it could be transmitted through saliva, tears or sweat, and 6% believed that sharing clothes with an infected person could pass on the virus. 21% of teachers thought that HIV/AIDS could be prevented by regular physical exercise and 55% said by abstaining from sex. One-fifth of the teachers knew of people affected by HIV/AIDS.

However, despite the relatively high level of awareness, about 57% of the teachers did not think that young people were at any greater risk of contracting HIV/AIDS.

Yet a disproportionately high number (91%) agreed that young people need to be well informed about HIV/AIDS. Nearly half the teachers agreed that the best place for young people to learn about HIV/AIDS was the school (47%), while 21% thought they should read books on the subject, 17% said doctors were the best to impart such information, 7% said parents and the remainder said from others.

For those who disapproved of sex education in school, the most common reasons were: school was not the right place, talking about sex would instigate risky behaviors, could be distracting to students and that parents may disapprove.

Discussion
The findings from the study suggest that there is a definite need to strengthen the gaps in knowledge and understanding of HIV/AIDS and life skills education among teachers. While teachers recognize that students need to know about life skills and HIV/AIDS, there is poor understanding of what life skills education comprises. More initiatives are required to strengthen the knowledge of teachers about HIV/AIDS and to equip them with the necessary skills.

While there is agreement that including HIV/AIDS and sex education in the school curriculum is an important pre-requisite for reducing vulnerabilities among future generations, their inclusion is still controversial and hotly debated in our country. Very rarely is HIV/AIDS discussed in the home; most often young boys and girls learn about sexuality through the media, through friends or other non formal sources. It is important that as a society we ensure our children get to hear about sex through gatekeepers such as teachers, so that they get the correct information. For this, both formal and non-formal opportunities should be made available for teachers to bring HIV/AIDS and sex education to students. It is important that we advocate the creation of an environment that makes this possible.

The author is founder and director, Kalanjiyam Trust, Chennai. He can be reached at [email protected].