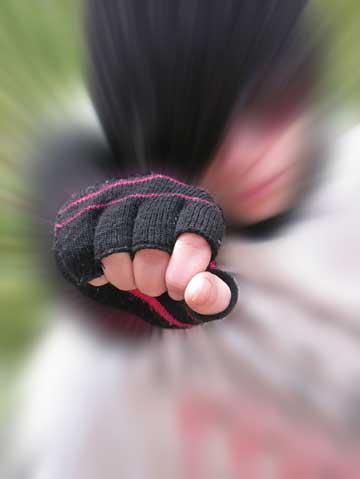 How does one handle aggressive behaviour in class?

Children who are aggressive in the classroom provide a considerable challenge to the teacher. The teachers can either aggravate the behaviour or tone it down, depending on how she handles it. There is no doubt at all that the magic wand lies with both the teacher and the parents and either can move mountains by using it judiciously.

To eschew aggressive behaviour, it is important to first study what triggers it, then classify it and finally eradicate it. The parent, the teacher and the child need to work as a team in order to succeed. Aggressiveness is an act that develops the aggressor while it reduces and violates the rights of others. The aggressive child tries to overcome others physically and often just wants to hold sway to prove a point. A lot of factors or a combination of factors produces aggressive behaviour in a child. Some of these are low self-esteem, stress at home or in the peer group, abuse, loneliness, exposure to violence, exposure to media, frustration, temperament, and lack of communication skills.

The first thing a teacher needs to do is to study the home environment and talk to the parents. Many a time, it has been found that, a child who is disciplined at home gives vent to his feelings in school. In such cases, the parents need to be counselled by the school counsellor and the teacher. The child also needs to be encouraged to behave well and what better way than leading by example. Children often imitate adults. The same is the case when a teacher is more strict than she needs to be. So here the fault lies with the adults and they need to modify their behaviour in order to reduce aggressiveness in the classroom.

In today’s world, the media also plays a pivotal role in accelerating or decelerating aggressive behaviour. Wrong messages from the media can have a negative influence and hence parents and teachers need to filter the child’s exposure to media. They need to be selective about the types of television programs that their children watch. Television shows that display violence as humorous should be especially avoided. On the other hand, programmes with good values can help the child be positive.

Yoga, meditation and introspection must be a part of the school curriculum and parents must also encourage their children to practice the same at home. This will definitely help in calming their senses. The effect would be even greater if parents and teachers also partake in these programmes with the child. Everything possible must be done to build a conducive environment at home and school which will help foster only positive behaviour.

The child must engage in enough physical activity every day, because this will help use energy effectively and not use it to propagate aggressiveness. The school must have enough sporting facilities and parents need to make sure that their child indulges in at least one physical activity after school hours.

The onus is on us as parents and teachers to dissipate aggressive behaviour and also practice good behaviour as preaching alone will take us nowhere! I think aggressiveness can be minimised if we follow the words of Dorothy Law Nolte

So instead of blaming the child and condemning him for being aggressive, let us all try and help the child to fight aggression in the class and at home. The magic wand lies in our hands!

The author is the Principal and Director of Pallavi Model School in Hyderabad. She can be reached at [email protected].