It was a workshop with about 30 teachers from schools run by the Azim Premji Foundation. The objective of the workshop was to explore approaches to teaching and learning of science. An idea dawned that one could dig into the past to learn a concept in science. This article shares the experience of teaching photosynthesis through its history. It outlines the approach taken, discussions and questions that emerged during the workshop, and explores challenges and limitations of using history in science.

I was a science teacher and in my reading of a few textbooks, sometimes came across a box/column at the end of the lesson giving a historical glimpse into how magnetic properties were discovered, or stories about metals and elements, etc. This was always interesting to read. As it was at the end of the lesson, one had the impression that this should not be taken seriously and not treated as part of the lesson. I always asked students to read it themselves as it was like a story. I also did not know the purpose of this little box or column at the end of the chapter. After a few years I was introduced to the debates on nature of science, and History and Philosophy of Science (HPS) and teaching science through HPS in a course. I then understood the purpose of this little box and also thought that the teacher could use it much more creatively if she/he wants to.

Mathews* (1994) outlines seven reasons for including history of science in teaching science,

A quick exploration of science books would reveal that there are many laws, definitions, and principles. The students might understand or learn it by rote. Many concepts in science are abstract in nature and one wonders how they originated. Tracing the history of how concepts developed and how they were formulated, reformulated, and over years how new paradigms evolved might make the abstract idea interesting. It also describes how scientists worked, their failures and multiple attempts thus humanizing science and giving a sense that is a hu(wo)man pursuit. It presents science as a hu(wo)man endeavor instead of idealizing it as something ‘out there’. 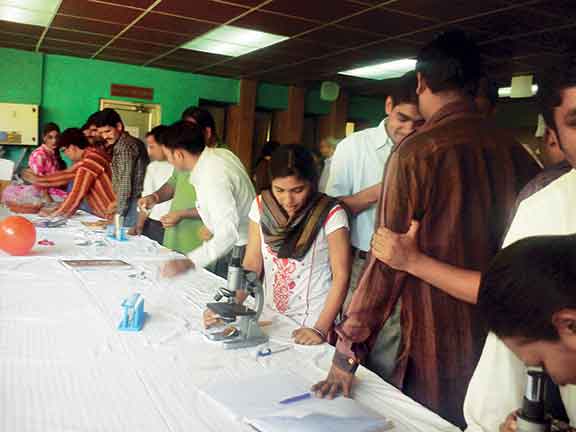 To see how this might pan out in classroom teaching, I explored the concept of photosynthesis for the workshop. Even in well-written textbooks, the concept of photosynthesis is presented as one good equation on how leaves prepare food in the presence of sunlight and chlorophyll. I asked the teachers if we understood or did our scientists understand photosynthesis as an equation and how did they arrive at this? If not for a formula or equation, then how do we approach this concept? After discussion, they said that one needed to understand the role of carbon dioxide, how plants breathe, nature of gases like oxygen, nitrogen, and carbon dioxide, the role of light, the concept of chloroplast and chlorophyll and so on. But how does one go about doing this?

Isaac Asimov’s How Did We Find Out About Photosynthesis? became a good starting point for us to read and understand how this concept evolved. This little booklet took us back 300 years. It started with Helmont’s experiment in 1643 and his finding that air is a mixture of gases. Later with the contribution of various scientists like Hales, Priestley, and Lavoisier, we understood the composition of air and its component. The bell-jar experiment by Priestley was an important step towards understanding the concept. The teachers immediately recollected this experiment and remarked that most books do present this. They also quipped that this little history would have made it interesting for students to know how Priestley conducted the same with rats, as also the contribution by Lavoisier would provide a more complete picture on how our understanding of the nature of air and how plants breathed evolved.

As we read through this, we tried to replicate some of the experiments. Some could not be performed. There were other scientists who were trying to understand the role of sunlight. Ingenhousz discovered how plants liberated oxygen in the presence of light. A few scientists repeated Helmont’s experiment and it became clear that carbon dioxide has an important role in food production. This was followed by Sach’s work. The teachers could relate to this experiment as often the dark patch on a leaf and testing of the leaf with iodine is found in the most textbooks. Then followed the history of complex substances like glucose. Though scientists had developed some understanding about synthesis of food, the question on colour remained a mystery. Then people started exploring the role of the green colour of the leaves. Two scientists (Pelletier and Caventou) in 1817 isolated chlorophyll from leaves and it took almost a century to understand chlorophyll better, as knowledge about cell and cell organelles increased.

After going through this process of exploring the history of photosynthesis and trying the experiments as scientists did, the teachers were struck by their own learning. They wished that the textbooks would do this and present the ideas in a similar inter-connected manner. They had always learnt and taught gases as a separate lesson in chemistry and photosynthesis as another lesson in biology and had never felt the need to connect the two ideas. They voiced the same opinion as Mathews did, that history helps to understand the concept better and makes one feel that science is hu(wo)man endeavor with failures, repetitions, reformulations, and success. Most of them decided that they would try teaching this lesson in a similar manner.

The teachers were also concerned that they were not equipped enough and did not know much about the history of science. They felt that this method of teaching could be time consuming. Considering the limitations in our classroom like the PTR (Pupil-Teacher Ratio) and various other challenges, one would not advocate that science be taught only through its history. It may be worth exploring the history wherever it lends itself and take small steps like trying just one concept every year and sharing the ideas of such explorations with the rest of the teacher community.

The author is currently with the Azim Premji University and pursuing her Ph.D in Education at the Tata Institute of Social Sciences. She was a middle school science teacher. She is interested in areas of science teaching, curriculum, gender and science and teacher professional development. She can be reached at [email protected].