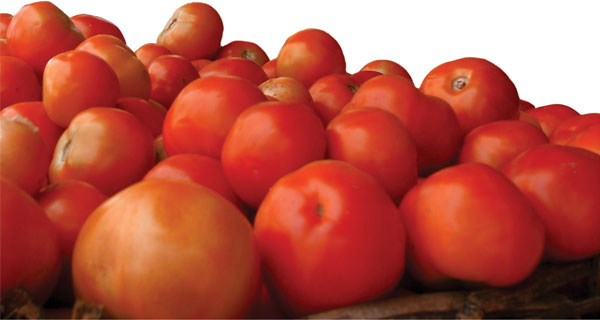 Did you know tomatoes are fruits? Botanically speaking, tomatoes are classified as fruits just like brinjals and pumpkins! So, what are ‘fruits’ and what are ‘vegetables’? There is no botanical category as ‘vegetable’; it is purely a culinary term. However, from a culinary perspective, the tomato is not as sweet as those foods usually called fruits and it is typically served as part of the main course of a meal, as are other vegetables, rather than at dessert. And so, it came to be known as a vegetable.

The scientific term for the common tomato is lycopersicon lycopersicum, which means “wolf peach”. It is a cousin of the eggplant, red chilli and potato. It is said that there are more than 10,000 varieties of tomatoes grown across the globe. Tomatoes are native to Central, South and Southern North America from Mexico to Peru. We get the word tomato from Nahuatl (a language spoken in Central Mexico) tomatl.

In Bunol, Spain, La Tomatina, a festival is held on the last Wednesday of August every year. Tens of thousands of people from all over the world participate in throwing tomatoes at each other! In this harmless battle, one hundred metric tons of over-ripe tomatoes are thrown in the streets. This festival has been the tradition since 1944 or 1945. Although there are many stories, nobody is certain why this festival first began.

Tomatoes are also known for their nutritional value. They are a reliable source of minerals and vitamins, especially vitamin C and vitamin A. Did you know that the bright, red colour of ripe tomatoes has a lot to add to its nutritional value? Some studies have shown that tomatoes are rich in lycopene, the carotenoid. These substances are responsible for its deep red colour. Lycopene is a strong anti-oxidant, which helps the body fight cancer causing substances.