Mathematics is the most ‘difficult’ subject known to some individuals and yet it is the most ‘creative’ and ‘beautiful’ for a few. Some of us have also suffered from math anxiety where a confrontation with numbers is a matter of jeopardising one’s self efficacy and solving a Sudoku with numbers (and not arbitrary symbols) also appears to be an achievement in that case. This range of feelings is unique to the discipline of mathematics. But why? 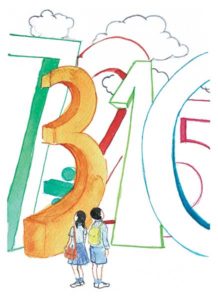 Popular shows on television also reflect an aversion towards the subject in the general public. This is dangerous. Let me explain it with an example. While watching some cartoon series with my kids, I have seen certain episodes where school-going children joke about mathematics saying that it is an ‘impossible’ subject; that even ‘black magic’ cannot solve their mathematics homework and that zeros are most common in mathematics. Young minds watching these episodes tend to imbibe such values unconsciously. Even in daily soaps for adults, the protagonists are seen to be saying things like, “I was scared of mathematics all my life.” It is almost as if it is cool to dislike mathematics. We don’t hear such things about other subjects. In a survey done by Bliss magazine, when school students were asked to express their views about mathematics, it was found that mathematics teachers were voted as being the most ‘evil’, probably because of the hours of boring lessons that they made their students endure (Boaler, 2002). Each year I am confronted with a question by students of mathematics, “Who created mathematics?” They want to know, not out of curiosity but because of the peril they experience. They say it as if they want to settle some scores with those who invented mathematics or with those who wrote their textbooks. It is painful to see how students have no idea about the long evolutionary history of mathematics. Students begin by cursing the mathematics teacher and end by disliking the subject.

In this article, I aim to put forth two possible reasons associated with the dislike for mathematics, which has led to mathematics being termed as an ‘elite’ subject meant for a select few who are ‘intelligent’. I also briefly discuss ways which can remove these misconceptions so that mathematics is understood by every student.

Mathematics is a highly structured discipline in which further understanding depends on previous understanding. For example, when a student starts learning Mensuration, he/she should know the related concepts of decimal numbers, conversion of units, operations on rational numbers, square and square roots, area and perimeter. Students should also be able to visualise solid shapes. All these concepts pertain to the mathematical content taught in grades 5 and 6. If a grade 7 student has not understood them well, doing mathematics becomes a struggle and this is where children start having problems with mathematics. These problems if not mitigated in a timely and systematic manner will lead to fear, phobia or anxiety towards mathematics. The three terms differ in their symptoms because there is a difference in the degree of dislike for mathematics but they all begin with not being able to do mathematics.

Today, when I have been a maths teacher and a teacher educator for prospective mathematics teachers, I share my journey with all my students. As a school student, I too had problem areas when I learnt mathematics. These were clarified by many patient teachers who taught me over the years. But for those teachers, I would not be writing this article today. Thus, the fear for mathematics stems from partial understanding of mathematical concepts. I am sure if mathematics could talk, it would complain about the many complaints that students have against it. “Why me…?” it would ask, “spend some time with me…get to know me and then see…our friendship could last forever,” mathematics would say. The beauty of mathematics is its uniqueness, its structure, it’s precision. No other subject is as crisp, concise and direct as mathematics. That is why it is a separate discipline and that is its nature. Therefore, the idea that mathematics is a subject for the ‘intelligent’ is a fallacy. 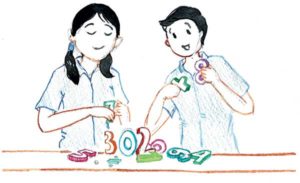 But, I must caution that masking the applicability of mathematics with the ability of an individual student and branding them as ‘intelligent’ or not is simply not fair. We need to discuss the real issue, that of partial understanding caused due to improper teaching. Mathematics is for everyone and anyone can be successful in it provided a teacher can find methods to teach it in ways understood by the student. I truly believe there are no bad students of mathematics, only bad teachers.

The second reason that causes a dislike towards mathematics in students is the inability to communicate ideas in a language that they are comfortable with. I believe an important subject to learn in school first and foremost is the medium of instruction, that is, the language for communication which could be English or vernacular as the case may be. I have seen many students struggling with mathematics because they could not communicate their ideas in English or when they could not comprehend the questions written in English clearly. This problem is not due to mathematics but due to the interacting language. Without a comfortable medium of expression in the concerned language, children cannot build upon their previous learning. But if they have a comfortable expression in the medium of instruction, children can access new resources, frame and reframe questions, argue and hypothesize. They can communicate effectively with teachers and peers and this exchange makes a positive impact on a child’s understanding of concepts. Adding to this, mathematics by itself is a language. It has its nouns, verbs and sentences. If we try to understand how we learn a new language, all of us begin by building connections between the language we know and the one we are trying to learn. Similarly, in the mathematics class we should begin by explaining mathematics concepts in informal language and day-to-day language of children. Then we can introduce them to the formal language of mathematics. This way, children can confidently build bridges between familiar ideas and new ones making a strong foundation in mathematics.

Here too the role of the teacher becomes extremely important as she is required to introduce the mathematical concepts gradually so that students can comprehend them, talk about them, express them in different ways and then the formal notation and methods can be taught in class.

If the twin issues of building systematic understanding and language of expression in mathematics can be dealt with effectively in the classroom, mathematics will no longer be a subject for the selected ‘intelligent’ students. If our aim is to give ‘happy’ experiences of doing mathematics, then we must begin by acknowledging its specific nature and then design our teaching methods accordingly. Just like we are genetically wired to learn language, we are born with a natural disposition to calculate, record, reason, create, visualize, find patterns and generalize. Isn’t this what mathematics is all about? Let’s demystify it for the sake of our superbly intelligent young children.

All disciplines require rigour to excel in them and each one has an important place in building a world view. In fact, if we go through the biographies of some of the very famous mathematicians we find that many of them were also highly acclaimed musicians, poets, artists and philosophers. In other words the boundaries between mathematics and creative arts have been created in today’s times. It was different earlier. Moreover, in a world where Gardner’s Theory of Multiple Intelligence has been widely accepted and acknowledged, doing well in mathematics is only one type of intelligence out of nine and it is time we widen our lens to include insightful and creative work being done in multiple domains as signs of intelligence.

The author is pursuing a doctoral degree in the teaching of mathematics from the University of Delhi. She can be reached at [email protected].

Of skills, learning, intelligences and … the marketplace
Unweaving the rainbow
Why the Arts are hard to learn