Although the Bible tells you to love your neighbour, there are times when you find it humanly impossible to do so. Thinking of the ‘boor’ living next to you is enough to stem the flow of the milk of human kindness that is supposedly running through all of us. When you dislike the person staying next to you, everything he does or doesn’t do becomes a major source of irritation. Sometimes, in your anger, you begin to call him names – these nicknames could be based on his physical appearance, his idiosyncrasies, why, they could even be based on what he eats! 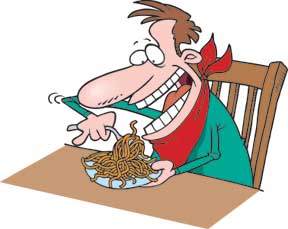 When I was in school, I used to be frequently called ‘curd rice’ because I was a ‘Madrasi’. I used to retaliate by calling my friends from North India ‘chapathi brain’. These types of culinary insults are common even now; they are not only exchanged between people living in the same country, but also between people of different countries. Very often, what we eat tells other people who we are. To our enemies, we are what we eat. Let’s take a look at how the English refer to their fellow members of the European Union.

We normally reserve our intense hatred for those who are our immediate neighbours. I guess this explains why the English have such contempt for the French. They refer to them as ‘frogs’, not because they think their neighbours look like one, but because they are in the habit of eating certain parts of this particular amphibian. For the French, a frog’s leg is a delicacy; something to be relished. The Englishman, brought up on a staple diet ‘fish and chips’ and beef, finds the idea of chewing on any part of a frog practically revolting. Considering the fact that historically the two countries have always been at loggerheads, it is not surprising that the English do not find anything redeeming in a Frenchman. Seen through English eyes, the French are undependable, promiscuous people, who are in the habit of swearing all the time. English idioms with the word ‘French’ in them are seldom complimentary: French letter (contraceptive), French leave (leave without permission), and pardon my French (excuse my swearing) are just a few examples.

Interestingly enough, before the French were called ‘frogs’, the sobriquet was applied to the Dutch. The name was given to them not because frog legs were part of their menu, but because like frogs they lived in swamps – for the English, Holland was nothing more than swampland. Nowadays, the Dutch are referred to as ‘butter box’. Like the French, the Dutch weren’t thought of very highly by the English. Just look at the idioms containing the word ‘Dutch’, they are not complimentary at all. A ‘Dutch treat’ is no treat, a ‘Dutch auction’ is one where the bidding comes down instead of going up, and ‘Dutch courage’ is the false courage that one gets when one has had a little too much to drink.

If you ask me, Adolf Hitler is a much misunderstood man. Here was someone with a funny looking moustache who went about convincing the rest of his countrymen that it was time for the Germans to reinvent themselves; that there was an urgent need to create a superior Aryan race. Wouldn’t you and I try to do the same thing if the rest of the world referred to us as ‘cabbage’? Don’t get me wrong; there is nothing wrong with this noble vegetable, but it lacks the appeal of an aubergine or okra. It is perhaps the humblest of all vegetables, too common and just too plain; and to call a proud Teuton, not just a ‘cabbage’, but a ‘sour cabbage’ is enough to make his blood boil. Now, why were the Germans given this unfortunate nickname? The answer once again goes back to their eating habits; the ‘sauerkraut’, meaning ‘sour cabbage’ was one of their favourite dishes. During World War II, German soldiers were contemptuously referred to as ‘Krauts’ by the Allies.

Since the Italians were tied to Hitler’s apron strings during the war, it is not surprising that they are nicknamed ‘strings’ – as you probably know, the word ‘spaghetti’ means ‘strings’. (Now do you understand why Congressmen are tied to Sonia’s?) The English and the Americans call the Italians ‘spaghetti’ or ‘macaroni’ because these are two of their favourite dishes. Ever wonder why Clint Eastwood’s ‘A Few Dollars More’ and ‘The Good, the Bad and the Ugly’ are called ‘spaghetti westerns’? The films were made by Italians.

Why are Americans called ‘Yankees’ and the English ‘limeys’? More about it, later.