“What is the one thing you can commit to this week, which shows compassion and will make our classroom a stronger and more positive place?”

My co-teacher and I asked this of our class the day we got back to school after the flood-inducing December rains in Chennai. Newspapers reported this as the worst rains Chennai had seen in a 100 years, and all of us were fairly shaken by the devastation that surrounded us. Walking into school that morning, we knew we were feeling unsettled about the week gone by, and it stood to reason that our students would also be coming back to school with their own experiences and feelings. My co-teacher and I had spoken about creating opportunities to support our students in processing what had happened – such as individual journal writing and having everyone share their experience of the floods during Circle Time. We also wanted to ground ourselves (us and our students) in understanding that situations like these are a powerful opportunity for us to be there for each other.

During Circle Time, we learned, as a class, that the past week had been different for many of us. Some of us had to leave our homes because of waterlogging, had lost beloved possessions, were staying in temporary locations; some of us had been at home, but without electricity or essential supplies; some of us were safe in our homes and even had electricity all through the rains, but had been anxious because we couldn’t reach out to friends in the community. One of our students described how her home flooded so suddenly that she had to be carried out of the building on her father’s shoulders. At the end of this sharing, a student quietly remarked that while our experiences had been different, what was common was the fact that the past week had been challenging for each of us in its own way. Looking around the room, we were grateful to be back together; at the same time, it was evident that everyone was back to school with different emotions and levels of energy. 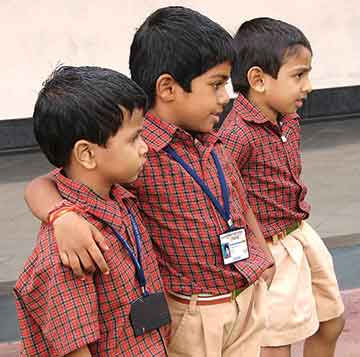 Gradually, the conversation started revolving around being compassionate and helping each other. Compassion is one of the core values in our school; it lives actively both in our curriculum and ethos. As teachers, we were hoping to move the conversation from ‘let’s talk about what happened’ to ‘what we can do now’ and that is when we asked the question that this article began with. On an index card, each of us wrote a compassion-driven commitment we were willing to make and shared it. Initially, some of us found it more challenging than others to hone in on one tangible commitment, articulate it, and feel comfortable sharing it. There were students for whom this was more emotional, who turned their index card into an intricate piece of origami, as they grappled with their feelings to arrive at a commitment. As I wrote, I found my mind re-living moments from the difficulty-fraught flood week, and personally I drew strength to hold myself together by tapping into my eagerness to hear what the kids would come with up.

When we shared, we heard a wide range of commitments – from sharing snacks with friends whose homes were still damaged and using resources more judiciously to being more flexible with each other during group work and staying on task so that the teachers didn’t have to spend more energy repeating themselves. All simple, but real-things that meant something to each of us, which we believed we could genuinely promise to do. At the end of that week, we went back to our commitments and reflected on how we had ‘lived’ what we had promised to do. Many of our students felt they needed to continue doing what they had previously committed to because they could see it helping someone in the room – for example, checking in on a friend who looks low. Some were honest with themselves in acknowledging that they didn’t feel they had given their commitment the focus it needed and chose to alter what they were willing to commit to – something that was realistically actionable for them. My own commitment moved from simply “being positive” to acknowledging the times when my energies were low, so that the kids could help me balance my energies.

What felt powerful about this exercise was the fact that each of us was individually reflecting on what we could do, and, as a class, we were building a collective sense of ownership towards growing from this crisis that had suddenly appeared in our lives. This didn’t necessitate us doing anything large and spectacular – all it took was small, personal steps that meant something to each of us. This is perhaps best reflected in a commitment one of our students made, one that struck me the most in this entire exercise: “I commit to sharpening my pencil right over the trash can because sometimes I make a mess with pencil shavings on the floor, and I don’t want to give extra work to the custodians who clean our classroom, because they might have had a difficult week too.” Sometimes, it really is the tiny, thoughtful acts that build deep, strong bonds in a community.

The author is an educator, a voracious reader and novice blogger. She currently works as an EAL (English as an Additional Language) teacher at an international school in Chennai. She can be reached at [email protected].