Shekar Dattatri, award winning wildlife filmmaker, first discovered his fascination for the wildlife at the age of 13 when he joined the famous Madras Snake Park as a student volunteer. At the Snake Park he took to photography and then developed an interest in wildlife filmmaking. His first film, ‘A cooperative for snake catchers” won him the National Award in 1987 for the Best scientific film. For his subsequent films, Shekar has also won several international awards. Shekar has worked with some of the world’s leading broadcasters of wildlife programmes including the Discovery channel, National Geographic and the BBC Natural History Unit. He now works closely with several conservation NGOs in India using his skills as a filmmaker to make hard-hitting advocacy films on conservation issues.

You’ve been in the field for over 30 years. How tangible do you feel has been the change in the conservation efforts and status in the country over this period?
Awareness about the need and urgency for conservation has grown tremendously during the last 30 years. However, so have the problems. Thirty years ago, India was very much a closed economy. Industrial growth was slow and the demand for consumer goods was low. All that has changed. Today, our population has grown much bigger, and people’s material aspirations are sky high. Due to economic reforms, there has been a huge growth in industrial development, with its attendant pressures on the environment. Mining of ores for domestic consumption and export has sky rocketed, and this has led to the large scale devastation of many forest areas in the country. Simultaneously, the political will for conservation has dwindled, and conservation is mistakenly seen by the political establishment as an impediment to development.

On the positive side, the declaration of over 650 wildlife reserves under the Wildlife (Protection) Act has afforded legal protection to wildlife in many natural habitats, while the Forest Conservation Act of 1980 has slowed down the indiscriminate destruction of Reserve Forests. Since the mid90s, a vigilant judiciary has intervened decisively in many crucial conservation issues, and has put a halt to destructive, non-forestry activities in forest areas. There are also many, many more conservation biologists, NGOs and activists today than there were 30 years ago, and conservation issues have become prominent in mainstream media reportage.

What would you say is the role of ICTs in the field of conservation? How important is it when you compare it with academic publications and scholarly articles?
Academic publications and scholarly articles are generally not accessible to or accessed by the general public. Hence, we need more ‘public-friendly’ methods of communication. Television programmes have definitely led to a huge rise in interest in wildlife and conservation, although there are no studies to show if such interest is turning people into conservation minded citizens. The spread of the internet has made it possible for people in any corner of the country to access knowledge, and that’s a very good thing. 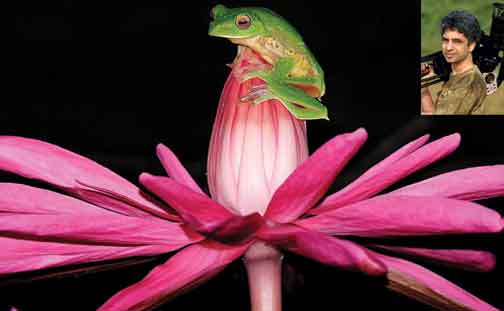 For a greater impact (in terms of reaching more people), what role do you feel movies like Happy feet and Wall-e play vis-a-vis documentaries?
I think a well-researched documentary has more impact in terms of the knowledge it imparts to receptive audiences. Feature films like the ones you mention above have a tremendous reach and may have a lot of emotional impact at the time of watching, but are unlikely to be viewed as anything other than fictional entertainment.

With the access to ICTs being limited, are efforts being made to educate the people who are directly affected by the human-wildlife conflict about issues that are usually covered in documentaries and films?
I would have to say that such efforts are extremely minimal at the moment. Much, much more needs to be done.

Generating awareness and enthusiasm for conservation among children is the key to sustaining India’s natural habitats and wildlife. Do you think enough is being done to rope in children? What else can be done?
Given that today’s children are tomorrow’s leaders, it is vital that we inculcate the right values among them at a very early age. Efforts in this direction are extremely inadequate at the moment. One thing that could help greatly is if each city and town could have an accessible, well-stocked and creatively run resource and learning centre devoted to conservation. This could act as a focal point for children with an inclination for nature to develop their interest further and proceed in the right direction.

CEE’s Children’s Media Unit (involved in programmes and projects to develop and use a variety of media for environment education) has been using your films as an educational resource and the response has been encouraging. Can you suggest other methods for wildlife conservation to be translated to suit the K-12 academic standards, to shape students’ environmental awareness and literacy?
A few colleagues and I are developing an elaborate web portal for youth under the aegis of Youth for Conservation, an initiative of my NGO, Trust for Environmental Education. When it is ready, it will serve as a knowledge hub for students across the country. Another portal, for practicing and aspiring conservationists, which I also co-founded, has attracted a lot attention and interest. You can access it at www.conservationindia.org.

With technology progressing rapidly and interactive gaming becoming a prominent part of children’s activities, what are your views on conservation-themed games being used to generate awareness and a sense of responsibility in the country’s youth?
We need to move with the times, and use every method that is available to reach children and inculcate awareness. But awareness alone is not enough. Children need to be motivated to act as well, in whatever way they can, and, for that, a human touch is essential. What India needs most of all is an army of enthusiastic nature educators with a missionary zeal!

Tigers have been in a precarious situation before. Back in 1973, it was the government launched “Project Tiger” that pulled back tigers from the brink of extinction. The project was successful initially but the interest surrounding it soon died down. How do we keep that from happening with newer projects?
Project Tiger, which has now become the National Tiger Conservation Authority, is very much active and relevant even now. Perhaps what’s lacking is dissemination of the results and knowledge generated to the youth of the country.

With recent events such as the collaboration between the Centre for Wildlife Studies, Bangalore and Wildlife Institute of India, Dehradun (23 April 2012), and the upcoming International Conference on Biodiversity in Education for Sustainable Development, what future do you see for wildlife and its conservation in India?
The conservation challenges facing us are huge. For real change to come about, conservation education should become far more widespread and mainstream than it is now.

Films are an unexplored yet a potential teaching-learning resource for the schools in the country. How can films receive greater attention as a method of teaching and learning? As an ace wildlife filmmaker, what do you have to tell the schools and teachers?
A carefully curated wildlife and conservation ‘film festival’ during the school year can be a powerful way for students and teachers to begin a long-lasting dialogue on matters relating to the environment and our planet. With essay competitions and quiz programs built around each film, such a festival can have a far reaching impact. Centre for Media Studies in Delhi, which runs the Vatavaran Wildlife and Environment Film Festival every two years, has a huge collection of films, from which the most suitable ones can be chosen.