The rain whistled through the gaps in the windows, dotting the clean white bedspread that lay over the tiny cot. Adrian watched with a tiny smile on his lips, as the drops appeared with increasing frequency on the sheet he had laboured so hard to clean. Putting a hand out, he let it get wet. The sensation of the cold water trickling down his callused fingers calmed him.

He sighed and drew his hand back, wiping it briefly on his shirt before turning back to the scarred wood desk with its scattering of papers. Lowering himself onto the rickety chair, he pulled the nearest sheet towards himself and scanned it tiredly. A few small errors came to his notice; he corrected them with casual indifference. After all, this was only his hobby. It wasn’t like his life depended on it.

Sitting cross-legged on the floor in a corner of the room, the Muse smiled.

Adrian’s tired eyes stopped in their unenthusiastic perusal of the paper. What was this? Suddenly he felt re-energised, re-vitalised, refreshed. Creative energy, such as he had never felt before was coursing through his veins. He knew this was the inspiration he had been waiting for. He knew this was the right, no, the perfect moment to begin his masterpiece prize-winning novel. 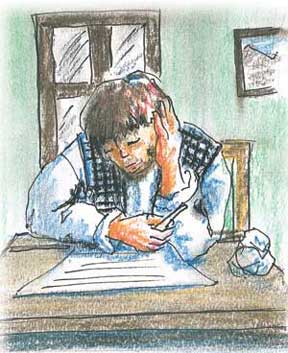 Casting aside the half covered paper, Adrian hastily grasped a fresh sheet. He raised his pen over it and paused. Words, phrases, ideas, were all pounding away inside his head. Which one should he unleash first?

Over in her corner, the Muse played a game of dice with herself. She waited as the cubes spun, her green eyes never leaving their whirling surfaces. Finally, they stopped. Her eyebrows rose slightly in surprise. Double sixes stared back at her.

His pen darted across the paper. Sweat beaded on his brow as he strove to get the words out as fast as he thought them. His hand muscles tensed and flexed, visibly knotting under his skin; he paid them no attention. All he was conscious of was the motion of the pen in his hand and the ideas and images rushing through his mind.

The rain continued to lash the window.

The Muse had closed her eyes. She appeared to be meditating. Her wrists rested on her knees, her hands hung loosely, palms facing downward. The black waves of her hair rippled slightly in the occasional breeze that gusted through the gaps in the window.

Adrian scribbled away, wholly absorbed in his work. In the course of three minutes, his untidy scrawl had filled a whole page. Once he looked up from his labours, only to glance at the clock ticking on the wall before him. After that time check, his eyes had not strayed from the manuscript again.

The Muse opened her eyes. She gazed straight ahead at Adrian. Lifting one hand, she smoothed away a few stray strands of hair that had blown into her face.

The spell was broken, for the time being. He leant back in his chair, panting slightly, as though he had just walked a great distance with no water to hand. Which he had, in a way.

His brain felt as though it had run a ten-mile race, and his hand was numb. With some difficulty, he pried his curling fingers from around the sweaty pen. He closed his eyes, gathering his thoughts for the next onslaught on the paper.

The Muse sat calmly, watching him, judging him. Was he ready? Ready to bear the burden of inspiration? Ready to sacrifice his time, his patience, his social life, and shut himself into the fulfillment of that inspiration? The test was yet to come.

Adrian opened his eyes. His gaze fell on the paper that lay before him, only half filled. The empty space seemed to beckon him; it longed to be covered, it longed to be clothed in his script.

He sat there for a while, doing nothing but staring at the sheet. Then his hand reached, trembling, for the pen. To begin his second attack.

The green eyes of the Muse darted to the room door. Yes. It was time.

A knock sounded on the door, startling Adrian and making him drop the pen. He blinked in consternation for a few moments, then rose from his seat and crossed the space of empty flooring to the door. Reaching for the doorknob, he pulled it open.

His eyes widened when he saw who it was.

A young woman stood there, one hand still raised as if to knock. She was swathed neck downwards in a long brown coat; black leather gloves covered her hands. Her black hair was loose; it fell about her shoulders in a tousled way. Thick lashes shaded brown eyes, and two shapely eyebrows arched above them. Her lips curled upwards in a smile when she saw him.

“Adrian! Finally!” she threw her arms around him, almost knocking him off balance.

“M-Maria?” What was she doing there? It been two whole years – no, wait! – three whole years since they had parted in hatred, each vowing never to speak to the other again. He had often thought about her, missed her even, and regretted nearly every day the many harsh words they had exchanged. But for the past few days he had been fairly successful in pushing away those painful memories. Why had she suddenly decided to come again? 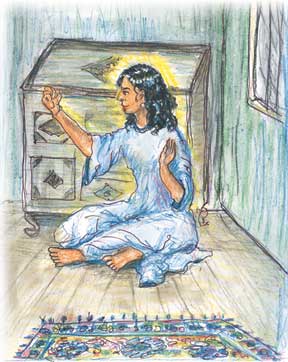 The Muse folded her arms. She was prepared to wait for the results, no matter how long they took in the coming.

Maria stepped back from him and peered intently into his eyes. But she said nothing.

He decided it was up to him to speak. “What brings you here?”

She smiled, a trifle sadly. “I came because… because…” she stopped, and seemed unable to continue.

Drawing a deep breath, she closed her eyes and continued. “Because I realised I still have feelings for you. I decided Iwanted to work things out. Truth is, I’ve missed you Adrian.” She opened her eyes now, and looked straight into his. “Please, if it’s possible, let’s work things out?”

She hadn’t said it, but he understood that she meant the time was now or never, that unless he seized this chance, they could never again contemplate the idea of restarting their relationship.

Lifting a hand, the Muse pointed a slender finger at Adrian.

Ideas burst in his head like fireworks, the desire to write them down, to record them on paper, to further his begun novel bubbled like molten lava through his veins. It was a stroke of inspiration more cruel than the first one. His eyes were torn from Maria to the abandoned pen and paper lying on his untidy desk. Almost before he knew it, he was halfway to it, his hand outstretched for the pen.

Maria’s voice halted him. His hand fell to his side; his raised foot was lowered. He stood between them – desk and door, pen and woman, Fame and a Second Chance. Which should he choose? He knew intuitively that if he chose one he would lose the other forever. Maria, or the novel?

The Muse rattled the dice in her cupped hands. Closing her eyes, she cast them onto the floor. They spun, whirled, the numbers flashed before her green eyes. Thunder rumbled outside. Finally, they settled. Two ones stared silently up at her.

The Muse stood on the wide windowsill, looking down at the middle-aged man who sat at the desk before her. He had changed little with the years, perhaps his hair showed a fewgray strands and his forehead a few faint lines, but that was all. He was bent over a sheaf of papers, reading them with a curious expression of loss on his face.

The door opened, and a smiling woman entered. She too, had barely changed; maybe she was a little plumper. She stole across to the man and tapped his back. He turned, and seeing whom it was, smiled.

“So you’re finally back. How was school?”

The woman laughed. “According to your daughter, wonderful. Apparently the class was treated to cookies today.”

“Oh?” the man laughed too, and stood up from his desk. “And where is my little cookie monster?”

“Here Daddy!” a small, lithe figure dressed in a pinafore came bounding into the room, her small bag still dangling from her shoulders. With a huge smile, she jumped into her father’s waiting arms.

“I thought you were supposed to remove the bag when you come home?” the woman asked with a slight frown.

Maria shrugged, and then smiled abruptly. “Oh well, you’re right. But I just hope she remembers next time, we have to have some more discipline in this house.” The man just rolled his eyes. Maria laughed at his expression. “All right, all right, no lectures for now.” She walked to the door, and then turned back to him. “Come down. There’s cookies and milk for everyone!”

The man took slow steps, and once he reached the doorway, turned around to face his desk once more. There sat his stack of papers, the fine beginning of his novel.

For a moment, the old desire to write, to win fame, came over him again. He almost forgot the little girl in his arms. He thought he could see a slender figure silhouetted against the light curtains, watching him.

He blinked. Then smiled. He had almost lost himself in a dream! Chuckling, he turned away from the desk and carefully shut the door.

The Muse turned from the empty room. With a little sigh she sprang from the sill, into the open air. As she drifted from the house, letting the wind take her to her next visit, only one thought ran through her head.