A few years ago, I was volunteering at a small Tibetan residential school in Himachal. Here I met Kalden and Choden, both from the same section of class 8. Kalden, a little stout fellow was always dressed shabbily, with at least two buttons of his shirt broken and shoes full of dust. He was from Sikkim and had come to this boarding school in Himachal to study. He did not do well in the “regular classroom” studies and used to barely pass his subjects. Choden was a tall, fair girl. She loved dressing up and adored film stars and other celebrities. Kalden had become a close friend of mine. I did not know what it was that attracted me to him, until one day, I read something written about him by Choden. The school followed the CBSE curriculum but also had a Buddhist monk as a teacher who would teach children some of the traditional subjects from the monasteries. During one of his classes, he had asked the children to answer a few questions, one of them being – Who is the person that inspires you? Who do you want to be like? That night when we both went out for tea, he read out a few answers to me, one of them was written by Choden. Here is a broken translation (from Tibetan) of the same –
I admire Kalden. He is so simple and down to earth. I have never seen him fight with other kids. He always manages to find a little corner and busies himself with reading or writing about something. He never talks bad about anyone and is always smiling. He does not do well in the exams and is considered by almost all the teachers as dull and lazy. Yet he spends a lot of time reading other books from library. He never tries to gain attention. After seeing him, I have realized that it is not the outer appearance that is so important. We should be beautiful from inside. I really respect the way Kalden is.

After listening to her answer, I was so overwhelmed, now realizing why I liked Kalden so much and how unknowingly I had made a certain impression of the girl (based on the outer appearance), which was so wrong.

I remember a small conversation I had with Kalden once –
“What is it that you want to do when you grow up? What’s your passion?”
I don’t know. It’s been long. I just want to go home and stay with my parents.”
“Yes, they stay in Sikkim right?”
“Yes, a small village in Sikkim.”
“Nice. But I was asking what you want to do when you grow up? Say, something special for the world?”
“World, I do not know. But I do want to take care of my parents. They have done a lot for me. I want to keep them happy.” 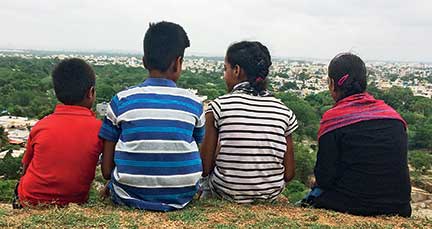 I did not know what to say after that. I was used to hearing doctor, police or army officer and pilot as an answer and never thought that this was a possible answer, a beautiful one too. I smiled and thanked him inwardly for teaching me something so invaluable.

It was in the same school, a couple of days later when we were having dinner that a child opened my eyes to another possibility. The dining room was a beautiful place where we all sat down on mats and ate. Up on the walls were these beautiful paintings made by both children and teachers. There was a nice little painting of a waterfall. I asked this kid sitting near me if he knew who painted it. He pointed towards a kid from class 6. After dinner I went to this kid, Tenzin, and asked him if he had painted that picture. He said that it was not him but Tashi from class 8 who had painted it. I went to Tashi and asked him. He said that it was his painting and told me how he took two days to complete it. I started appreciating the art and his skills. I told him how this kid I had asked did not know and thought Tenzin from class 6 had painted it. Tashi then told me that he probably got confused as the painting beside the waterfall one was made by Tenzin. This other painting, which I had assumed was the work of some teacher, was a beautiful portrayal of a hill and trees on it. I was wonderstruck. After I had asked Tenzin and he pointed to me that it was Tashi’s painting, we did talk for some time. Not once during the conversation, did he get the urge to tell me that it was he who had painted the beautiful painting next to the waterfall one. How was that possible? It was in 2003 that I had cleared the entrance to IITs. Ever since I have grabbed opportunities to share with anyone and everyone the same, seeking appreciation every moment. How someone could be free of that urge continues to intrigue me even today. 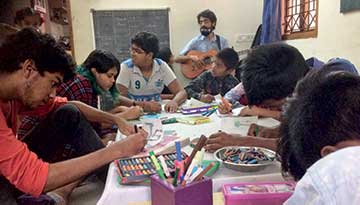 It’s been many years and now I spend my time with children at a community learning centre in Hyderabad called A Little Grove. It is a small space where both parents and children come and spend time together learning various things from each other. I have often had people who visit the learning centre asking me what inspires me to spend my time in this space with children. I would generally answer how I feel there is a need for diverse learning spaces to exist, including spaces where children are given an opportunity to participate in constructing their learning environment instead of being mere consumers of knowledge segments that we adults/experts have decided for them. Somewhere deep within however, I can see that it is not so much about what we can give to these children, but the simple lessons we can learn by just observing them. Over the years, children of varied ages have showed me how easy it is to live a simple life, how to be happy and peaceful for no apparent reason, how to easily forgive someone and not carry the grudge within for hours and days. They have showed me something that I barely have a memory of, how to feel truly happy in others’ happiness. And how it is our nature to be compassionate and caring.

About four years ago, a young boy came to our centre. He was a misfit in the conventional school setup. He had the habit of repeating what others were saying. I did not know how to work with him. He would sit in the class and start repeating things, mumbling to himself. It was only a week or two later when I was sitting and struggling to teach him math that two children came to me and told me that I should work with him in art instead. They brought some of the work he had done. There were beautiful sketches of the temples, monuments he had visited. He was able to remember the intricate details and tried putting them on paper. It was these children who understood him and helped me understand him. Ever since I have seen that a lot of time its children more than the adults who are able to connect to and understand other children of different age groups more easily and thereby help each other face the little difficulties of life.

When I was young, I wanted to become a monk, go to a forest and sit under the trees and learn the truth about life. Life though had other plans for me and I ended up working with children in a city. Sometimes I feel that maybe it did not turn out to be very different from what I had planned. There are moments when I think of myself as a simple monk seeking peace and these children are the trees that are helping me understand little by little.

The author spends his time working with children and adults at a small community learning space called A Little Grove (www.alittlegrove.in). He loves music, making things with hands and is currently exploring the art of wood whittling. He can be reached at [email protected].