To my mind, there are two compelling reasons for considering the environment in the context of children’s education. The first is that good education helps children construct knowledge and develop understanding through interaction with their immediate environment. The second is that we as a species need an education that will bring about a deeper relatedness to the environment. A relatedness that will prevent us from destroying the very basis of our lives. In other words, we could say that education should include “learning from the environment” and also help children in “relating to the environment”. Over a number of years teaching has taught me to see how the first leads to the second.scooby doo 2 combo c5

Children are naturally curious about their environment. This curiosity can be encouraged at school by allowing children the space and freedom to explore the spaces in and around the school. Walks have always been an integral part of learning at Poorna (Poorna Learning Centre is situated at Sathanur village, Jala Hobli, Bangalore North; www.poorna.in). I would like to share some experiences of how walks have been used by teachers at Poorna to support learning from the environment.

Walking to learn from the environment
Very short walks for about 40 minutes or so can be used to teach many subjects and all the examples given below have been actually tried out at our learning centre. I have tried to organize the walk related activities according to subjects, although walks provide much room for collateral learning!

Biology:
A major portion of biology can be taught outdoors and I have mentioned just two examples – 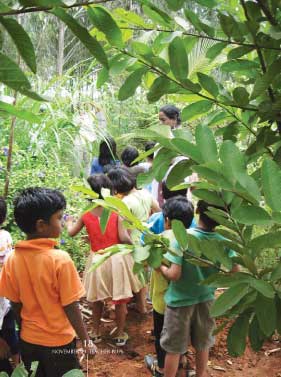 Appreciating nature
Excursions have been a much loved part each year at Poorna for they provide great opportunities to learn about both the natural and the cultural environments. Rather than detail one or more of the numerous excursions that we have been on, I would like to share two incidents of how children find a sense of connection with nature and come to appreciate the wonder and beauty of it. On a trip to the forests in Hassan district, I was silently gazing at the immense trees growing from the valley when I noticed eight year old Ammu by my side, her huge eyes brimming with tears. “What happened, Ammu?” I asked and she replied in a voice choked with emotion and wonder, “I didn’t know that God made such beautiful places!” So we continued to stand silently, our hearts filled with gratitude for the beauty spread before us.

During another trip we had reached our destination at 3:30 a.m and were sitting on the steps of the bus stand of the little town, waiting for daylight before hiring jeeps to take us into the reserved forest. Very soon, children needed to “go susu”, so I took them a little way down the quiet and dark road so that they could relieve themselves behind some bushes. As we walked back towards the bus stand, one of the children, Archana, said, “What is that sound?” and we stopped and my ears picked up what may have been the ‘chree, chree’ of insects. Before I could answer, Archana, Zuri spoke up pointing to the velvet sky, filled with a myriad stars, “That is the sound of the stars twinkling, no, aunty?” – Who was I to deny the possibility that we could be hearing the sounds of stars twinkling? We walked on in silence listening to that sound in the stillness before dawn.

Children who form deep connections with their environment are likely to be pro-active when it comes to caring and action for the environment. The conceptual understanding that they would have developed by way of learning from the environment would inform their actions as environmentally sensitive people. Children participating in clean up drives and creating awareness about plastic waste have already been mentioned. Many more such examples could have been cited, but for the paucity of space.

I would like to end by saying that the little girl who heard stars twinkling is in college now and is involved in actively campaigning against illegal iron ore mining in her home state, Goa. Her slide presentation was woven into the classroom study of mining and metallurgy, as part of the chemistry lessons.

It is possible for teachers to make connections to environmental issues as they teach the regular syllabus. Personally, I have been unable to teach about atomic structure without discussing the atom bomb and the world war, nor have I been able to teach about the constituents of the atmosphere without linking it to geopolitics of carbon and its presence in the atmosphere. Environment education is about helping children see the connections.

The author is the founder-trustee of Poorna Learning Centre in Bangalore – an “alternative” school that emerged out of her experience and ideas while she chose to home-school her own children. She is now Consultant, Academics and Pedagogy, Azim Premji Foundation, Bangalore. She can be reached at [email protected].