One evening, when I was at office a bit longer than usual, a Facebook message request pops up on my screen. I accept it and am pleasantly surprised to receive an invite to give a talk on gender equality at a school in Chennai. Mr. Vishnucharan Panneerselvam, the Correspondent for Shree Niketan Schools, a group of schools based in Chennai and its surrounding towns, had heard that I am a stand-up comedian and is intrigued to know the prospects for women in this highly male dominated field.

I chat with him a little more and discover that an enterprising team of students in their school had an ongoing project based around gender. The most interesting aspect of this project is that the students themselves chose to work on this topic. They were motivated to take up this cause on hearing about Swati, a girl from Chennai, who was brutally killed by a stalker after she rejected his advances. This fascinated me because even as adults while we often show our outrage about violence against women, we fail to have nuanced discussion on the role that gender stereotypes play in enabling this very same culture of violence. The fact that 14 year-old children had recognized the importance of calling out these gender stereotypes, and spreading awareness about it was highly impressive. When I was 14, I remember that all I cared about was my cartoons and skating around the neighbourhood with my friends.

Throughout the flight from New Delhi to Chennai, I rehearse my speech nervously, desperately wanting the children to take away something meaningful from the talk. On landing, I am greeted with a large placard and a bouquet of flowers held by two students from the school. Initially, they are as shy of me as I am of them, but as we make our way to Thiruvallur, two hours away from the airport, I get to know them better. Pershiya and Varaguna are part of Design For Change (DFC), the team in charge of organizing the “Saaindha Tharasu – Fighting Gender Imbalance” project. Pershiya wants to be an architect and Varaguna a chartered accountant. They tell me about how they have conducted over a thousand surveys, asking questions about the roles that women and men play in the household. The findings indicate that in the majority of households, though women are better qualified, they are less likely to be employed. Only 13 percent of men helped with chores around the house. Although women made the budgets in half the households, only 30 percent had a say in the financial decisions of the household. While Pershiya and Varaguna seemed startled and indignant at these findings, I realize that I am not shocked at all.

As soon as we reach the school, I am welcomed by a loud marching band and three young boys with poker faces, from the National Cadet Corps (NCC), flank me on both sides. For the rest of my visit at the school the boys do not leave my side, and I don’t succeed in making them crack a smile either!

Mr. Bharanee, the coordinator of the event, leads me to a room where I am introduced to my co-speaker Sowmya Rajendran. She is a decorated writer who has won the Bal Sahitya Puraskar Award for her children’s book ‘Mayil Will Not be Quiet’, that addresses issues of gender during adolescence. After the initial introductions, we make our way to a classroom where we interact with the students of the DFC. There are about 15 students, half of them boys and the other half, girls. As we speak to them it emerges that it was actually the idea of a male student to take up the topic of gender equality. Sowmya asks the boys, “I understand what the girls have to gain from this, but why do you want to talk about this issue?”

A tall boy confidently gets up and says that this project is important to him because he cannot bear that his sister is not allowed to play sports with her friends, while no such restrictions are placed on him. However, when the question comes of how he is going to ensure such a change, he is at a loss for words. This makes me realize that in spite of having our hearts in the right place, often it is very difficult to know how to make a systematic change, especially with an older generation who have a fixed worldview.

The team then proudly hands us a copy of the comic book that they have drawn and designed themselves. It is a delightful comic which aptly captures gender biases faced by men and women, starting from birth, through school and after marriage. The nuanced view that these children have cultivated on the issue, continues to amaze me even now. 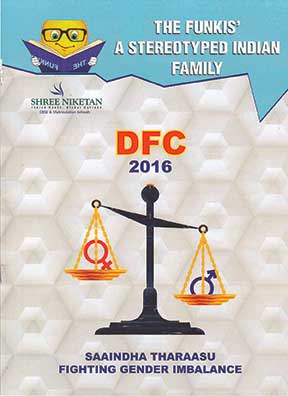 Once on stage, Sowmya and I fumble a bit as we attempt to light the traditional South Indian “deepam”. I try not to look awkward as I am being felicitated with a shawl by the Principal. Sowmya is first to go up. Her speech breaks down the basic concept of our understanding of gender and makes the students laugh by pointing out the silly things that people say around us constantly to reinforce gender roles. She plays clips from Tamil movies to bring out the relationship between the Indian film industry and how it normalises gender stereotypes.

Next, I walk up the podium and look at the hundreds of eager faces, ready to give the speech that I had rehearsed. However, when I start talking, I find myself deviating from my speech and recounting instances when I had faced hardships being a woman. I recount the times when I was inappropriately touched by men, when they indecently exposed themselves to me, when colleagues made unwanted advances and how I was blamed by the police when I was assaulted and mugged. I appeal to the girls not to stay silent when they face these issues and appeal to the boys to be supportive of women who face harassment. I explain, that being a woman in a male dominated field (I am an engineer and a stand-up comedian, so I definitely qualify), doesn’t mean that women become more masculine. As women, we have our own perspective and a distinct voice which needs to be heard by more men.

At the end of the talk, I realize that it had served as a catharsis for me and I feel a strong sense of empowerment. Despite the applause, I am afraid that the students might have found me terribly boring. However, when a girl gets up and asks me whether my muggers ever actually did get caught, I feel a sense of relief to realize that they were actually listening to me.

I leave the talk feeling that this was a life changing experience. On constantly facing regressive ideas, a woman often feels cynical and defeated. After coming to Shree Niketan School, meeting with the warm staff and interacting with such earnest children, who strongly believe that they can make systematic changes, leaves me filled with immense hope, after a long time.

The author is based out of Delhi and is a senior policy associate at the Energy Policy Institute at the University of Chicago and also a stand-up comedian. She can be reached at [email protected].

Bias by design: and how to deal with it