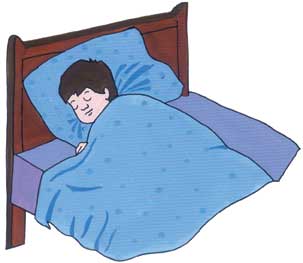 At the end of a long day when you find it difficult to keep your eyes open, you tell your family members that you are going to bed, and bid them ‘good night’. Those of us who are more colloquially inclined, might say, ‘I’m going to hit the sack’. Ever wonder why the bed is called the sack, and why the poor thing has to be hit? When you think about it, how many of us actually give the bed a good thump before we deposit ourselves on it? We may do this to the pillow, but to the bed, hardly ever. This is because the beds that we have nowadays are quite firm; they are made of material which prevent the bed from getting lumpy. The early beds that the Europeans used, especially the not so well-to-do ones, did become lumpy if they weren’t looked after. In fact, these beds weren’t beds at all; they were merely sacks stuffed with hay! When an individual wanted to go to sleep, he used to literally hit the sack in order to ensure that the hay inside was evenly spread. If he didn’t perform this act on a daily basis, he ended up sleeping on a very uneven bed. It is from this act of actually hitting the bed that we get the two expressions ‘hit the sack’ and ‘hit the hay’.

Of the two expressions, ‘hit the hay’ is the older. It was used on a regular basis several centuries ago; it is, however, seldom heard nowadays. The expression ‘hit the sack’ was popularised by American soldiers during World War II. They referred to the sleeping bag which they carried as the ‘sack’. With the passage of time, anything that was used to sleep on began to be called a ‘sack’ – including the bed. By the way, the original bedroom didn’t refer to the room where the bed was located. A bedroom was merely a big bed; in other words, it was a bed with a lot of room.

When Americans want to hit the sack, they sometimes say that they would like to ‘catch some zzzs’ (zees). Any idea where this expression came from? Well, believe it or not, it has come to us from the world of comic books. Those of you who are avid readers of comics like Beetle Bailey, Archie, Garfield, Asterix, etc. would have noticed that whenever a character is asleep, the cartoonist has the letter ‘z’ (pronounced ‘zee’ in American English) hovering over the character’s head. It is from this that we get the expression ‘catch some zzzs’. Another expression related to sleep that comic books have given us is ‘saw wood’. When you say that someone is ‘sawing wood’, what you mean is that the person is snoring. In the 20th century, cartoonists often used the technique of representing snoring with a drawing of a saw cutting through wood!

That’s enough about sleep for one day, don’t you think? I sure do, and as far as I’m concerned, the time has come for me to hit the sack. Good night then. What did you say? Sleep tight? How do I do that? Am I supposed to hold on to my significant other tightly? And if I’m single, what happens then? Am I supposed to grab the pillow and hold on to it tightly? Makes you wonder, doesn’t it? The ‘tight’ in the expression ‘sleep tight’ refers to the bed that you are sleeping on. Remember that over a hundred years ago, the bed was very different from the types of bed that we use now. They mainly consisted of a wooden frame across which a rope was stretched in a criss-cross pattern. Such types of beds are still quite common in villages in our country. When the rope was stretched across tightly, it gave good support to the mattress and the person sleeping on it. The individual was therefore able to sleep well. When the rope became loose, the bed began to sag and as a result the person sleeping on it felt distinctly uncomfortable and did not get any sleep at all. Therefore, in order to get a good night’s sleep, the person had to make sure that the rope was tight! He had to sleep tight!

What about the second part of the expression – don’t let the bed bugs bite? What bugs does it refer to? Well, I leave that to your imagination!

S Upendran teaches at the Central Institute of English and Foreign Languages, Hyderabad. He can be reached at [email protected].