“There are no boundaries to a teacher’s commitment,” remarked Mr. Maruti Ramprasad, Principal, Ramadevi Public School, referring to the ten-day Twinning Programme conducted in the school from November 19-26, 2008, possibly the first of its kind among the school community.

This ‘learning journey,’ as he put it, came about in the most unusual way, in encounters and meetings in Singapore that saw educationists from two different countries passionately moving towards a common cause and doing all it required to get a programme of this magnitude up and running.

While student exchange programmes are the norm in universities across India, the concept is yet to take-off in Indian schools. The silver lining is that most schools are open and enthusiastic to the idea and some, like the Ramadevi Public School (RPS), Hyderabad, have not only put their best foot forward but are also experimenting with it.

The Twinning Programme
The idea for an exchange programme between schools took seed when Mr. Ramprasad took off on a dream holiday to Singapore. As the then principal of Hyderabad Public School, Mr Ramprasad was naturally curious and interested in visiting schools in this region and eager to see how they functioned. On a visit to the Greenridge Secondary School, he met Ms. Hang, the Principal. A couple more visits to other schools and meetings with the people concerned, three schools from Singapore – Greenridge Secondary School, Unity Secondary School and Geylang Methodist School – and Ramadevi Public School embarked on their ‘learning journey together.’ 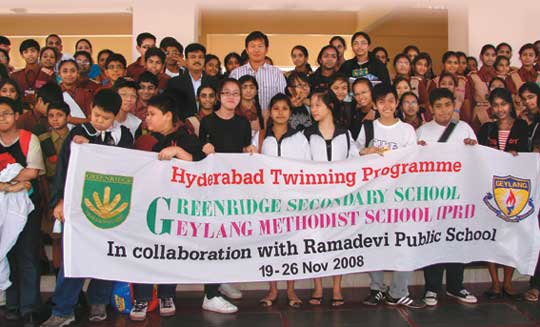 RPS entered into a three-year agreement with the three schools from Singapore in 2007. “The Twinning Programme aims to build a better understanding of the other’s culture, way of life and more importantly teaching-learning methods. The students visiting us are involved in our classroom and extra-curricular activities. They become a part of us for the period of their stay here. This way our students and their students get to know and learn from each other which is the purpose of this programme,” said Mr. Ramprasad.

Buddy system
Each year when RPS played host to a team of 30 students and 4 teachers from Singapore it ensured that it lived up to the spirit of the programme. To make the visitors comfortable and settle down sooner, RPS assigned one of its own students to one student from Singapore. So each student from Singapore had his or her own ‘buddy’. The buddies did everything together. In a sense, this gave them the chance to understand each other, appreciate the differences in their cultures and also the teaching – learning cycle. The teachers from Singapore too sat in classes to observe teaching methods and displayed their own skills by teaching a few lessons to students.

The last day of the 10-day programme featured a cultural show that children from both RPS and the visiting school put up for each other and their teachers. Exchanging of mementoes and gifts marked the end of the Twinning Programme. “Such exchange programmes build the confidence of students,” says Mr. Ramprasad. He adds, “As Indians we harbour this feeling that we are not as good as them. But such programmes help you to realise that we are not any less. If Singapore or America is good at something our competency lies elsewhere.”

The Twinning Programme has also helped the participants realise a teacher’s role in education. While Indian school education primarily revolves around the teacher, he or she plays a minimal role in Singapore. The teachers there only act as a guide to get students to understand what they are learning and arrive at their own conclusions. While this system may be good in that it encourages independence, Mr. Ramprasad felt that the Indian system was better.

The challenges
Having successfully launched this programme, Mr. Ramprasad is keen to take it further. He has ambitious plans of bringing in more schools into this programme. The challenges, he said, were many. “What I was thinking is that this would benefit all the students. Instead of one school coming here and our school’s children alone participating, if there is a pool from where children from various schools, such as a few children from St. Ann’s, a few from HPS, a few from Nasr, and some from Ramadevi school or Johnson Grammar school, are handpicked, we then get five or ten students from each school who are interested. This student group will be the result of an inter-school understanding and then all these children could go to Singapore and interact with two or three schools there. Probably this may be a better idea and give better understanding about both processes. I have discussed this idea with a few principals at a conference and am hopeful it will materialise in some time”.

In meeting people and cultures halfway, Mr. Ramprasad, with his vision, may have created a small ripple. This small step he has taken has undoubtedly left an impression on all the participating students on either side – an exchange of cultural understanding that will remain with them for a long time to come.