The philosophy of peace education is easier to preach than practice. With the contemporary world strife-torn in various ways and words like peace and spirituality severely challenged, it is astonishing that an orientation to the idea of peace in schools is a buzzword. Terms like peace and spirituality sound, to a sceptical mind, more like a formulaic premise of a new industry rather than a genuine effort to bring about any change. It is, of course, a fallout of the burgeoning impact of the new sectors of business and consumerism where peace seems to be packaged and commodified. Moreover, peace is often projected against conflict, and therefore, means conflict-resolution. No wonder, in policy statements, the idea of peace makes sense only when there is a resolvable conflict. 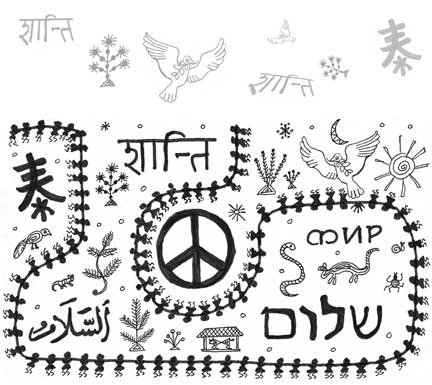 Amid such growing perceptions that undermine the magnitude of the phenomenon called peace, some of us in schools experience the need to rework on the idea of peace in order to nurture a new generation of peace citizens. Thus, to attempt to orient children to peace we must recognise the aspects of young life. Peace can be perceived in the simplest acts of life like watching birds in the morning, enjoying the sunset every evening, listening to the winds, smelling the earth when it rains, and smiling. All these acts that forge an affinity between the inner self and the external environment signify peace. Perhaps this was what Aurobindo meant when he envisaged education as enabling learners to find harmony between the spiritual interior and the material exterior. If peace can be underlined as taking pride in one’s own identity, it also includes the act of appreciating others’ identity too. Peace involves understanding oneself, understanding the relation between self and others, and sensibility toward one’s thoughts and actions of everyday life. Does peace education in schools take into account the comprehensive structure of peace? These considerations led me to observe and document the activities which refer to peace education in the school I teach, Bluebells in Delhi, where an elaborate curriculum of life-skills is being pursued to provide learners with an orientation to the idea of peace.

The agenda and action
The structure in this case is ambitiously designed to produce young ambassadors of peace by providing students with training in life-skills on the one hand, and inspiring them for possible action in their own capacity on the other. Thus, the whole pedagogy of peace education is doubly charged as it consists of cognition and action as two cardinal co-ordinates. Inother words, while children acquire knowledge of tools, techniques and methods of understanding themselves and their environs better, they are also taken to the various areas of actions. In the list of life-skills, in agreement with UNICEF, the school includes communication and interpersonal skills, decision-making and problem solving skills, and coping and self-management skills.

To begin with, the school has various clubs under the ‘Socially Useful and Productive Work’ (SUPW) programme. Each club offers a syllabus-based course and an evaluation at the end of the year. Dramatics, photography, pottery, dance, music and public speaking are the areas wherein corresponding skills are taught. Certain other clubs, such as the Palestine club, Right to information club, Debating club, etc., are geared to expose the learners to areas of conflict and enable them to frame and articulate their concerns. These are more to make the change-makers cognitively prepared. Various sessions by these clubs enable learners to peep within and chisel themselves into shape.

This is explicitly revealed in the sessions of the Dramatics club, conducted by Dilip Shanker, a noted theatre personality. In these sessions, Dilip manoeuvers the participants using tools of meditation, whereby imagination helps in self-discovery. In this exercise, children bring about what Dilip describes as a union between the subjective and the objective realities to realise the wholeness of the individual personality. The intuitive understanding of every kind of emotion, pertaining to animate and inanimate bodies, eventually is converted into enacting various ideas. The whole idea is to let the learners know that acting on stage and action in real life are alike insofar as both pre-suppose the apt motif, relevant emotions, and understanding of the self and the other, the ability to forge cooperation with others and so on. Besides, by enacting interpersonal situations, the participants realise how the execution of certain traits, features, emotions and ideas could be disastrous for not only the community but also the individual self. Hence, children learn to select the right ideas and emotions in real life settings in order to co-exist even with differences.

Other clubs also enhance skill-based abilities and expression of the same diverse situations. Photography, dance, debating are the fields where children learn not only the tools of expressions but also the art of observing, formulating ideas, and actually resisting and articulating resistance to undesirable aspects of human living.

In addition to routine club-activities, the school also invites experts from various non-governmental organisations, during every academic year, to conduct workshops on several issues pertaining to life-skills which eventually aim at understanding and actualising peace. A glance at a few workshops illustrates the point. Pravah, an NGO working with schools and colleges, has executed a series of sessions with children, which are put together in an elaborate life-skills curriculum titled ‘Making Changemakers’. Summarily, the curriculum envisages that the participants of the session will learn about themselves and their surroundings. Through activities such as ‘Kabir making’, a participant was able to reckon with personal attributes, whims and volitions, and possibilities and limitations. On the flip side, the ‘other’ to the self was discovered to be essentially similar although materially different from the self of every participant.

In yet another programme ‘Footprint’, devised by Child Relief and You (CRY), the school anticipated children’s growth from ‘Me’ to ‘We’. The school agrees with the ideology of shaping each individual child in such a way that an inspiration to bring about a confluence with the whole of humanity could emerge. Experts from CRY, pursuing the module of ‘Footprints’, manoeuvered participating children toward the aforementioned end. Convinced of the intent of the sessions and rejoicing in the content of the curriculum, children began to look at the environs where they lead their everyday lives differently. They genuinely began to empathise with ‘others’ irrespective of socio-economic and socio-cultural differences. A constructive relationship among children from diverse backgrounds was an apparent result of the process. According to the convener of all such sessions in school, Bhawna Bhasin, the teacher in charge of social work in theschool, the school has adopted the methods encapsulated in the ‘Footprints’ module, and now it is carried on by the sensitised teachers of the school.

Modicare Foundation has been conducting workshops on understanding physical changes, sexuality, and adaptation to the environment, in addition to building and sustaining interpersonal relationships. Workshops by the students of St. Stephen’s College, called ‘The Youth Parliament’, have also been consistently held. Through simple aids such as charts and discourse, their workshops endeavour to inculcate ideas pertaining to citizenship.

A course called ‘community service’ requires children to visit communities residing in slums and offer help. Children trained in the technique of social work spend time with people listening to them and suggesting appropriate measures or promising to act on their behalf, and teaching the children and interested adults.

Incidentally, Bhawna edits an annual magazine for the school titled ‘Nurturing’ which declares its intention in the punch line at the top of the magazine: ‘Peace begins at Home’. Evidently, the peace-programme the school pursues does not leave out the parents. It appeals to parents to be partners in grooming young ambassadors of peace for the future. Perhaps this is why parents readily consent to the school’s plan of sending children into the outside world to execute the tools, methods and insights they have acquired in the school. The Tehelka Foundation and the school collaborated to send well-trained and determined children to various villages of Maharashtra, Rajsthan, Orissa and Karnataka to interact with the villagers and understand the people’s struggles through the host NGOs at the destination.

Peace education is indeed a grand idea to work on in a school. There are a few problems, however, that need to be addressed if a school is determined to produce a generation of peace citizens. First, the structure of education is replete with an unsaid hierarchy. At the top it has mainstream teaching and learning meant for passing exams under the ambit of formaleducation. This is where most of the lessons that children learn in the workshops are contradicted. The idea of peace is not evenly distributed in the structure of education. Second, the vision, insights and tools and techniques children learn are not always appreciated by the outside world. And last but not the least, workshops by experts may be too regimented and rationalised in terms of the means and the end to take into consideration the meaningful irrationality of the learners.

If peace education is to have the necessary impact, it is imperative to recall Prof. Krishna Kumar. “The unpredictable outcomes of learning are far more important than the ones we can predict and plan for. This is so because the crisis caused by violence and conflict in the human world is far deeper and vast than any rational plan can resolve. Only miracles can, if we let them happen, as they do quite often, eventlessly.”* Hopefully, schools pursuing peace education will evolve a pedagogic structure that can greet miraculous developments of the learners.

Dev N Pathak is on the faculty, Department of Social Science, Bluebells School, New Delhi. He can be reached at [email protected].