I was teaching at an alternative school in Bengaluru and that year we found ourselves in a situation where the group that was in their final year of school (equivalent to grade X) had no Hindi teacher. That was when I had to step in, although I had not studied Hindi beyond high school myself. My source of confidence in my ability to teach the group came from the fact that in my higher secondary exam, I had equal scores in Hindi and English and also the fact that I had grown up in a place where the regional variant of Hindi was the local language. Although my family members were not native Hindi speakers, among us siblings, we often spoke, and even quarrelled in Hindi.

The situation of the children in the alternative school was quite different. They had grown up in Bengaluru and spoke English among themselves and at home. One boy in the group, let’s call him Shubham, came from a home where Hindi was spoken, and was familiar with the spoken language. Prior to joining the alternative school, he had studied in an elite school and was not fluent with the Hindi script. I vividly recall being startled when he handed in a small Hindi composition entirely written out using the English script. He could definitely express himself well and his writing displayed a sense of dry humor and wit that were part of his persona. How I wished the board exam would allow this kind of writing – Hindi language written in English script!

So there I was faced with a group of rebellious teenagers, who did not particularly see the need to learn Hindi, and who would probably not have bothered with it had it not been a required subject of study both by the school and the examination board. Furthermore, the study material required them to engage with quite a lot of Hindi literature and poetry. The prose section of the study material had a reasonable selection of writing – ranging from a story about a corpulent pandit who was outwitted by a cat to a write-up about a famous cricketer. Even if the language difficulty level was not perfectly suited to this group of children, I felt that I could help them connect with the material if only I could get them to tune in to the Hindi lessons. The first hurdle therefore was to somehow pique their interest and build some reading muscle. Teachers who work with teenagers are probably familiar with the quiet and not-so-quiet forms of resistance from the adolescents. There is a tendency of not making eye contact and meeting direct questions with a stony silence. Admonitions and scolding would not work either and actually result in still greater resistance.

My first strategy then was to gamify. The word ‘gamify’ probably did not exist back then and it was most definitely in the pre-app era. But hey, games are as old as humankind and almost no one is immune to their attraction. I simply started writing various quiz type questions on a poster and leaving them on display. I challenged the group to see how many points they could get by answering the questions. The questions would go up in one class and the answers would be announced in the next. So this way, the children started reading Hindi with some degree of eagerness and since some of the questions were quite humorous, a fun element became part of their Hindi learning. The prose lessons became easier to transact and sometimes questions from these would form part of the poster quiz, but not as a rule, since I wanted them to read the language in contexts other than their dreaded textbooks.

The next hurdle was to tackle poetry. Before getting to poetry, I felt the class needed to develop an appreciation for literary language. During my own schooling, I had to struggle through thick grammar books that led us through some of the intricacies of poetic forms and metres and also tried to teach us how language could be adumbrated through the use of similes, metaphors and poetic exaggeration. The tedium of doing the grammar book exercises made me develop a distaste for Hindi classes. I felt that if I had to escape karmic justice as a teacher, I needed to do something better with my own teaching. I began thinking about how my class could get a better sense of the literary forms and how they could even try their hand at composing some poetic sentences! After all it is not only the poets of yore, like Meera Bai, Sur Das and Kabir Das who could use language in evocative and memorable ways. All of us need to find ways of using language in effective and creative ways. So, to begin with I decided to focus on how we could use language to compare and create similes and how we could use metaphors and how hyperboles can function as linguistic caricatures that can help us convey our message powerfully.

I spent time in class giving examples of how similes and metaphors are used during our conversations. I encouraged the group to create their own expressions and they thoroughly enjoyed playing around with the Hindi language. At this point, I was not upset by whatever expression they came up with – “The teacher screeched like a crow” was perfectly acceptable as long as it was in Hindi. Similarly, “Sharmila the elephant, gobbled up all my snacks!” if said in Hindi was equally acceptable, provided it was followed by an apology to Sharmila. Actually the class went even better than I expected and by the end of it I felt most of the children had a sense about what was meant by ‘rupak alankaar’ and that they would indeed be able to distinguish ‘upma alankaar’ from the breakfast food ‘upma’. 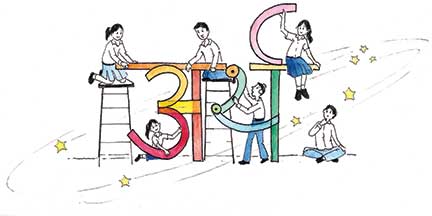 Since a lot of the Hindi poetry involved similes and metaphors drawn from nature, the next class was held outdoors. Children could pick any object and try to describe it poetically using a few phrases. I wish I had a maintained a record of their descriptions, for they came up with many interesting descriptions using similes or metaphors. Anuj, a particularly boisterous boy surprised me by coming up with a metaphor of a bride all decked out in gold ornaments with reference to a cassia tree with bright yellow flowers. The usually quiet Ashwini had written a memorable description of a big boulder by the school gate, comparing it to a brooding old man, wrapped up in a shawl. That day my heart sang, “It’s possible, it’s possible! They chew gum and wear scruffy jeans, but there is poetry in their hearts!”

Then came the toughest part yet. We had to tackle Meera Bai. So very far removed from the children’s context – historically and culturally. The language of her couplets didn’t even sound like the Hindi that the children were slowly becoming familiar with. As I visualized their blank stares while I tried to teach them about Meera Bai’s poetry, I experienced a sinking feeling. Children may not realize it, but there are times when we as teachers are even more reluctant than them to go into the class.

I had grown up listening to M S Subbalakshmi’s Meera Bhajans and her singing had a heart melting quality that had appealed to me, even though it was more fashionable to listen to the Beatles then. I decided to do take the battle head on and provoke a reaction from the class. After letting the children listen to a bit of M S ‘s Meera Bhajan, I declared, “What beautiful music we oldies listened to, while you listen to crap like Eminem these days!!” Shubham spoke up, “Eminem is not crap!” he declared angrily. “Why do you even listen to Eminem?” I challenged. The rest of the class went quiet. Shubham thought for a while and then said, “Because Eminem sings about our feelings. His words touch me inside.” It was my turn to be silent. I had no familiarity with Eminem’s music or poetry, but Shubham’s words and conviction triggered a shift in my stance. Isn’t that what all poetry is about – a way to express feelings such that a chord is struck in the receiver’s heart? I backed down from my superior stance and quietly apologized for having declared that Eminem was crap. I told the class that like Eminem, other poets also put feelings into words. Suddenly Meera Bai didn’t seem so alien. Once the connection between poetry and feelings had been made, we could study Meera’s poetry by understanding her peculiar predicament in history and make sense of it. We could begin to look at the use of particular similes, metaphors or idioms in her poems.

A breakthrough was achieved in this class by making a connect between what had to be studied and the children’s context. I had reduced the children’s antagonism towards learning Hindi. I wanted to leave children with a sense of appreciation for Hindi literature and poetry – hopefully I did that.

The author is a veteran teacher and teacher educator who continues to be fascinated by the way people think and what they think. She is the founder-trustee of Poorna Learning Centre in Bengaluru – an alternative school that emerged out of her experiences as a teacher and mother. She can be reached at [email protected].