Dance? Bharathanatyam…? What are you going to do with it…? Are you not too old to learn it…? Etc., etc., etc.

Questions came up constantly… I was a kindergarten teacher and had been in the profession for four years already; I was 23 years old and was learning Bharathanatyam. I wanted to learn the art. I loved dance and was elated when I learnt that my student Sanjay was the son of the well-known dancing couple, the Dhananjayans. I approached them and told them that I had no interest in becoming a performing artiste, but that I wanted to learn the form of the dance just to feel it in my body. 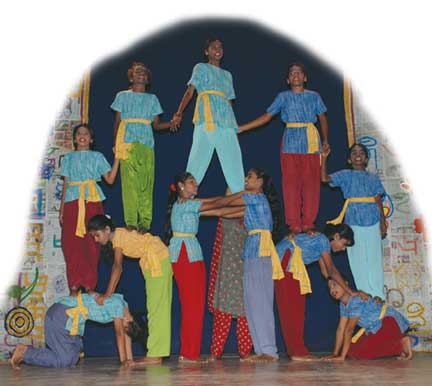 To my delight, I found that I was bringing whatever I was learning during my dance classes into my classroom. Indian performing arts are mathematically wired, they are descriptive and concise. So I went about applying everything I learnt in the dance class to my teaching whether it was the lower kindergarten class in the morning, (story telling with mudras, numbers in dance steps, nursery rhymes with expressions) or English or Environmental Studies for classes 2 – 6 in the afternoon (narration through gestures, body language, finding hidden meaning, the root of a word, saying something in different ways, etc). And of course for the cultural activities, by trying to get the students to become choreographers. The more I studied dance, the more I saw its use in my class.

Then came the introduction to rural performing arts. These are called folk arts as opposed to the classical arts but I have a problem with that classification. Everything is folk for me. There were techniques to learn from a theatre form like koothu. Therukoothu uses several amazing dramatic techniques in telling a story. A character enters from behind the curtain. Here too, performance is happening, with the actor acknowledging the musicians, getting his crown tied on his head after he has performed a few steps and (for instance) sung that the character Duryodana will enter, etc. After the curtain or thereshile is removed, he sings, I Duryodana have come. He gives a synopsis about himself depending on the scene that will be played. The Katyakaran (one who binds the story – sutradhara in Sanskrit) asks him questions about the reason for his appearance.

Would any teacher not do this? Summarising the lesson, asking questions about it and coming to the present? How about dramatising it, giving the student time to assimilate the subject, to decide what is going to be said about a lesson, be behind a curtain to gain confidence, then come out and speak about a character/subject/paragraph/idea that is being represented or narrated. I have had students talk about abstract concepts like hot and cold currents as if they were characters. The more I got involved in traditional art forms, the more I saw educational implications in them.

Natyashastra, the ancient Sanskrit treatise on theatre, talks about four modes of communication. They are Angika, Vachika, Aaharya, Saathvika. Angika is communication through body language without the use of words. Vachika is communication through words and verse (add music and effects to it). Aaharya is costume, decor and external aids like props and stage sets (Think teachers’ own dress code, using teaching aids, making the classroom beautiful with students’ artworks, posters, etc.). Saathvika is achieved through deep inner resonance with the content one is communicating. Don’t we use all these in our day to day classroom teaching? Can we give them some more attention?

I developed activities based on the four modes and my teacher workshops began with my colleagues in my school and now with several groups of teachers from other schools. Techniques of traditional performing arts come of use in every one of these. After all, the Natyashastra says, the very idea of creating the arts is to make it easy to understand and bring the difficult teachings of the philosophies to everyone in an audiovisual manner. Is that not what we are doing in the classroom? Bringing a text to life just as an actor does? Are teachers not performers? Don’t they need to capture the attention of the student sitting on the last bench in the classroom? 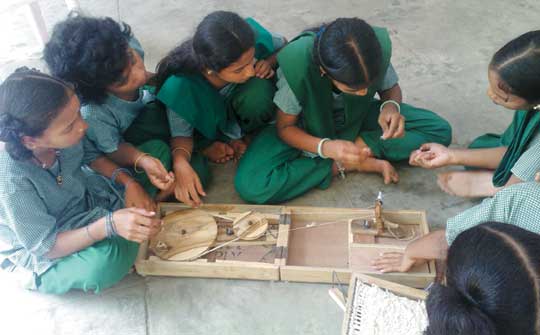 Natyashastra talks about audiences for a performance. The Utthama, Madhyama and Adhama. Utthama are the know-alls. They have already assimilated what is going to be performed, know the background details, etc. The Madhyama audience is one that knows about the subject but not the details. Adhama is one that has no prior knowledge of the subject and needs to be spoon fed. Natyashastra says a performer needs to cater to each group as part of the audience and prepare the performance in such a way that it has something for each. Do we teachers do that? It is so easy to respond to the Utthama in the class. Pat come the answers. What about the Adhama?

Gandhi has something to say about this: “I will give you a talisman.” He said “Whenever you are in doubt, or when the self becomes too much with you, apply the following test: Recall the face of the poorest and the weakest man (woman) whom you may have seen, and ask yourself, if the step you contemplate is going to be of any use to him (her). Will he (she) gain anything by it? Will it restore him (her) to a control over his (her) own life and destiny? In other words, will it lead to swaraj for the hungry and spiritually starving millions? Then you will find your doubts and your self melt away.” I wonder if we teachers can apply this to our teaching in the classroom.

Gandhi believed that spinning promoted “the education of becoming and being”. Spinning combined head and heart, emotion and intellect into a living faith. Why did spinning disappear from public space and education space? Are we too much tied to text book learning and knowledge memorised to give any space for it in our schools? 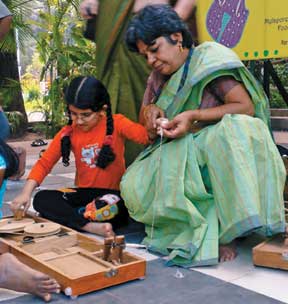 This was the reasoning behind creating The Aseema Trust, to bring traditional performing arts, spinning and Gandhi to schools. The Aseema Trust has been conducting sporadic workshops with Charkha spinning as a tool to discuss respect for diversity, peaceful conflict resolutions and need for cleanliness and public sanitation. We embarked on two projects. One was “using traditional performing arts as an empowering tool for young girls” and “Spin a Yarn – self and society”, to have spinning wheel as a craft activity around which children discuss and learn about conflict resolution, respect for diversity, handlooms, handicrafts, sanitation and ecology. Simple living and not being greedy are subjects we discuss in a once-a-month meeting we have with class 7 or 8 in ten schools of the city. Students have focus group discussions and create charts. So much learning happens through this.

Gandhi said, “A teacher who establishes rapport with the taught, becomes one with them, learns more from them than he teaches them. In this way, a true teacher regards himself as a student of his students. If you will teach your pupils with this attitude, you will benefit much from them. (Talk to Khadi Vidyalaya Students, Sevagram, Sevak, 15 February 1942 CW 75, p. 269).

So while dance opened my eyes to a way of doing and seeing in the classroom, Gandhi’s words provided the reasoning behind that way. Dance and performing arts had indeed opened a new way to teaching.

For more information on the Aseema Trust visit: www.aseematrust.org

The author is founder of the Aseema Trust, Chennai. She can be reached at vrdevika@gmail.com.