I have always loved the picturesque, bizarre yet beautiful balancing rocks of the Deccan. They are like the clouds… designed by nature, and open to many interpretations. They are as awe-inspiring as any other wondrous creation of nature – the sea, the river, or the snow-capped mountains or the rainforests.

Having grown up in Warangal and Hyderabad in Andhra Pradesh, I have always been surrounded by these rockscapes. The name Warangal itself comes from the word ‘Orugallu’, which means ‘single stone’. As children, when our parents drove us to Hyderabad and back, we always watched out for the balancing rocks of Madikonda just before Kazipet, and we knew we were home. My children do that now, each time we go to visit my parents. These balancing rocks stand there just as they did during my childhood, and during my father’s childhood, so he tells me.

As teenagers, my brother and I, with our cousins and friends, used to climb the rocks close to my home. There was something mysterious and exciting about the climb, and though fagged out, we felt free and happy afterward. 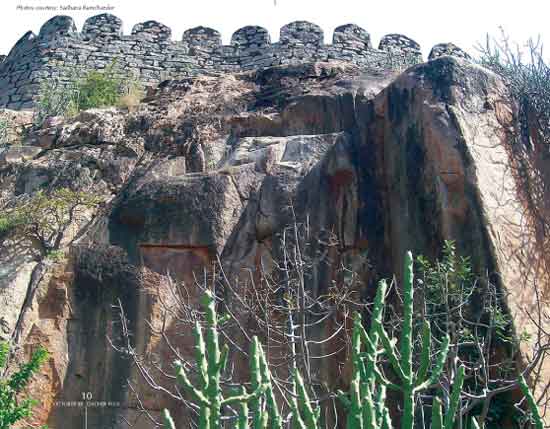 It was after a gap of several years that I re-discovered the joys of climbing rocks. Faced with depression and a minor (but seemingly major to my mind) health problem owing to the sudden death of my friend-philosopher-guide, I was searching for something that would help me get back to my state of well being. I decided to take up some physical activity, and so joined a group in Hyderabad that goes trekking on the rocks. 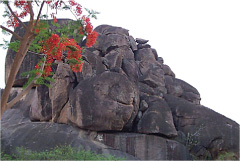 This time the rocks played a therapeutic role. It did me good to get away from the polluted city and breathe some fresh air; the climbing gave me much-needed confidence in my physical ability, and being with a group made me feel better emotionally. I slowly recovered from my ailment, and once again reached a stage when I could breathe deep and feel plain and simply happy at just standing there, on top of a rock or looking at wild flowers that I could never find in the best of parks in Hyderabad. 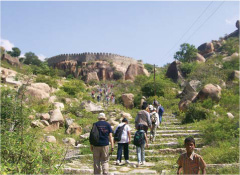 I began to feel close to nature again. On one walk we found peacock feathers, on another a porcupine quill, on yet another, we spotted a fox. Peacocks were common as also multi-hued chameleons thatalways seemed deep in thought! Sometimes we saw a snake or a rabbit or a strikingly patterned insect. The most recent thrill was when I spotted a red velvet mite (birba buddi, arudra purugu, often called “velvet boochies” by school children), an insect I had not seen for years. I was overwhelmed at this opportunity to show it to my children. 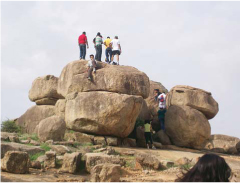 Apart from the flora and fauna, the rocks themselves were fascinating. The shapes were always different and the balancing rocks never ceased to amaze. I discovered the ‘mushroom rock’ in Central University, the ‘hamburger rock’ in Gachibowli, the ‘mother and child rock’ near Kaithlapur, the ‘tortoise rock’ in Jubiliee Hills, and many others.

And each time I was among the rocks, I felt humbled… like the rivers, the seas and the mountains, how much these rocks may have witnessed! Before them, we are but a speck of dust that is blown in the wind… 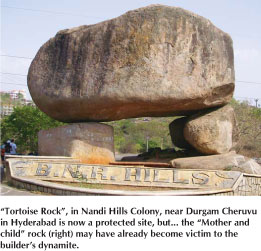 But you may be wondering, why this sentimental personal journey in a magazine for teachers?

It is because these rocks are now endangered – they represent excellent material for concrete, sought by the greedy and rapidly expanding real estate machinery. People in general, and teachers in particular, need to be sensitised to the beauty and importance of rocks so that they can in turn educate children.

On one of our recent walks to the rocks near Kaithlapur, off Sanathnagar, we found that the rocks were in the backyard of a construction site; nevertheless, we climbed up only to find the huge boulders drilled with holes. Dynamite would soon blow them up and these seemingly unconquerable, millions-of-years-old granite monoliths would give way to ugly dwellings for human beings. It was a tragic sight. This sight has become common on the outskirts of the city, as also around other cities that share a similar landscape – in Karnataka and parts of Tamil Nadu and Maharashtra. One often sees blasted rocks being processed by huge stone crushers. 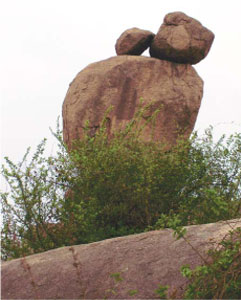 I believe that a sensitive human being can make a difference to the world. And if one sensitive adult can make it her/his duty to influence even a few children, over the years there will be many more sensitive adults than there are now. We need to do something to preserve the gifts that nature has given us, or our children will be forced to live in gray-brown, tree-less and rock-less, car – and building-filled surroundings.

The Society to Save Rocks, with whom I go on treks, has been doing a lot of good work to protect these granite formations in and around Hyderabad. The Society was started in 1996. Anyone is welcome to join, participate in the efforts to preserve rocks, and go on nature treks to different rocky areas. The treks happen on the third Sunday of every month, and are usually held in the afternoon, and sometimes in the morning. Occasionally there is a whole-day trip, such as a very interesting trek I recently participated in, to Devarakonda in Nalagonda district.

Now, don’t be apprehensive – this trek is not like the pictures you see in ads for adventure sports, where they climb steep rocks dangling from a rope. This is simpler and anyone can do it at their own pace…I always feel inspired by the senior citizens (70+ even!) who come on the toughest of treks.

So, put on your caps and shoes, gather together a bunch of kids, and head for the rocks.

As my children say, these balancing boulders… ROCK!

The author, writer and editor, also conducts natural studies activities for children. She can be reached at [email protected]

What you can do to preserve rocks

Every citizen can spread awareness about the beauty and antiquity of the Deccani rockscapes, and the need to preserve them. You will be surprised how many people have never had a good look at those intriguing formations!
You could: 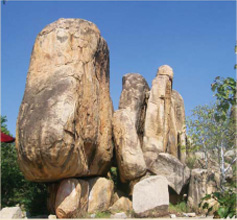 Working to save a geological heritage

Rock sites constitute a very important geological heritage of the Deccan-southern peninsular India. These rocks are observed to cover considerable areas of Andhra Pradesh, Karnataka, Maharashtra and Madhya Pradesh and are amongst some of the oldest rocks in the world. Geologists estimate their age to be 2500 million years.

The rocks contribute to the interesting landscapes and serve an important ecological function. What fascinates the common person is the fantastic shapes which they have assumed and the peculiar position in which they sit on top of each other, or in mutual neighbourhood. They harbour flora and fauna and many are known to support water conservation by recharging the groundwater through subterranean passages. They are also responsible for the formation of lakes and other water bodies. 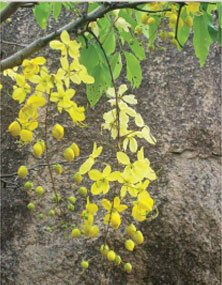 Unfortunately, most of them are threatened by quarrying for metal or stones for construction. Their destruction will mean not only loss of a rich heritage having intrinsic as well as recreational and tourist value, but also of national features having botanical, geological and zoological importance which may hold the key to our future environmental health and environmental programmes.

Some persons in Hyderabad concerned about the rapid destruction of this geological heritage formed the ‘Society to Save Rocks’ in 1996 (http://www.saverocks.org). Their aim was to protect these unusual and fascinating rocks, which, due to increasing construction activity, were falling victim to quarrying and blasting. They gave names to various rocks in the environs of their city depending on their shapes. The Society mobilised public opinion and moved the government against indiscriminate destruction of rocks. Apart from aesthetics, the role played by rocks in the ecology of the area was also stressed. As a result of these activities, the government declared nine rock formations as protected under the Hyderabad Urban Development Zonal Regulations. (From: Rock sites of Andhra Pradesh, Volume 1, published by Society to Save Rocks, 2004).

Note: In February 2009, another 15 rock sites have been notified by the government as Heritage Precincts, on the recommendation of the Society. 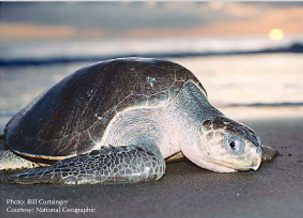 Other parts of India also have their unique landscapes – rocky and otherwise, and flora and fauna that play a very important role in maintaining the balance in the ecosystem. Encourage the children in your classrooms and homes to take note of how things are changing in their surroundings in response to the demands of urban spread and the growing population. Some examples of environmental concerns in other parts of India:

Some success stories include Romulus Whitaker’s efforts to save the three endangered Indian crocodile species by setting up the Madras Crocodile Bank in 1976; another is that of the declaration, in 1984, of Silent Valley in Kerala into a national park, owing to efforts by conservationists who protested against the setting up of a hydroelectric project there; and the famous Chipko movement in Chamoli in Uttarakhand where women hugged trees to protect them from being felled.

These instances show that if common people make up their mind, a lot can be achieved.