As we continue discussing Indrani Barua’s question (see box alongside), our respondents now turned to exploring the cause of such behaviour. Taking off from where we ended the last part of the discussion, Vineeta Sood declared: “One can find an entry into the child’s world if one can go beneath the action to relate to the reason for a particular response.”

Radha Ravi wrote: “While reading your query, I got in touch with a boy who is so individualistic that he doesn’t give a thought to any other child’s or person’s perspective. It is too early for this child to be definitive about his ideas and thoughts. Looking at his pattern, I would say that he has given only one definition to each thing and he is not ready to look at other definitions. This is not a quality of a cyclic leader. This seems to be like a linear leader, where the leader is I, me, myself and he is always at the beginning.”

Radha then went on to suggest: “I feel there is a need for you to talk to him personally and ask certain questions like why he doesn’t feel the need to be cooperative. I feel there is always a reason for a child to behave the way he behaves. There will be something more to his acting like this. You should also arrange for a circle time and let the other children also speak about how they feel about him. It is absolutely not to demean him but try and reflect upon his actions where he is not able to see.”

Shilpa Bansal analyzed this further: “Interestingly, I have come across such students who are very intelligent and hyperactive. They have very limited attention span and hence a lot of fidgeting and difficulty to sit and listen. These kids cannot bear pauses or slow lectures. Their brain simply makes them do multi-tasking, which sometimes could be a disturbance to the class.” Her observation that “Usually, teachers try to instill discipline (which is an order) or chide the student,” was followed with the consequence: “Slowly, they are made to learn the herd mentality, where they are taught to behave in social circles and they cease to show the same curiosity.” Acknowledging that “it becomes very challenging for a teacher to ensure that each student does not lose any of his individualistic qualities,” Shilpa’s clear enunciation of the dangerous consequence of ‘shutting up’ such a child cannot go unheard.

Continuing in the same vein, Kamala Anilkumar suggested: “Getting to know the situation at home may also help us understand the child (to some extent). And if you sense that the parents are giving in to the child’s whims, have a conference/s with the parents. It does not mean that if the child is insecure due to some family discord, still, he/she cannot be allowed to act according to his whims.” Kamala then listed checkpoints: “Other things we need to check on are:

Vineeta Sood held a slightly different view, as she ascribed a good deal of the (perceived) restlessness to the age of the child in question: “I believe, for five year olds, developmentally, their needs are very different and so they need to be understood from a lens that has a focal length which can bring to light these developmental needs. In my experience, it is difficult for five year olds – developmentally – to confine to the needs and schedules imposed from outside. They can engage with people and situations on their own terms, as suggested in the question itself. I have not seen many five year olds with a willingness to co-operate in team work when it is a demand made on them from outside. They might play with each other as a team when it is their choice, or they themselves see a meaning in it. If we try to impose these requirements on them on a day-to-day basis and expect them to respond to suit our expectations, I am afraid we might do exactly what we don’t want to do and that is, make ‘him lose his excellent individualistic qualities’.”

Vineeta shared her own experience thus: “I see that young adults of 20 plus also have a five year kid sitting inside them. They also respond favourably if they are not judged and are engaged with respect, in a mode of acceptance – that no matter what they are doing, they must have a reason for that.”

She described an anecdote where she operated on her basic principle: “If one can connect to that reason, then one can facilitate them to go past the behaviour, address/accept the reason and engage with what they need to in a meaningful way.” 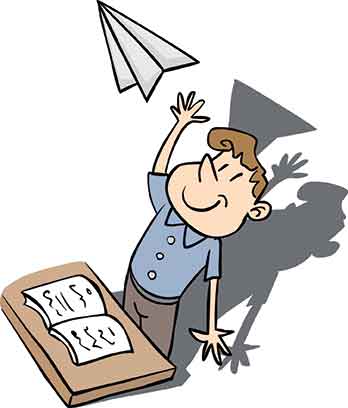 “I was teaching a class of 20 plus-aged youngsters, in a college in North India. Being a fresh student from the University myself, it was my very first experience of teaching. And who were my students? Young adults, taller and stouter, and only a couple of years younger than I. I was told that this was ‘the most notorious class’, disrespectful to the teachers and disinterested in learning.

“On the very second day with these young adults, some of them unabashedly started making paper airplanes and flying them in the classroom. They did so right in front of my eyes, not even waiting for my back to turn as I wrote on the board. It took me a fraction of a second to respond – and before I knew, I had picked up some of these planes and was flying the planes along with them.

“There was an awkward moment in the class. They could not understand my response. Some of them hung their heads with shame – although that was not my intention at all.

“After a while, I asked them if they were ready to pay attention to the subject now. I had a class with pin drop silence thereafter. The next day, we talked about how they were doing in zoology – and it turned out that they hadn’t had a zoology lecturer for the major part of the year. Now, three months into the exams, it seemed impossible to cover the syllabus and prepare adequately for exams. I offered that I was ready to take extra classes for them, provided they were seriously interested and were going to invest genuine efforts in learning. We collectively decided to have extra classes. I had near total attendance in all these extra classes. I never had to check them for discipline issues again. They self-checked and checked each other.”

Vineeta then summed up the likely causes of her own behaviour with these students by enunciating her own principles thus: “Now, some 30 years later, when I look back at what happened in that moment, I realize that it followed certain principles which formed the backbone of my approach and relationship with my students irrespective of their age, from 3 to 30 years. Some of these principles are enlisted here:

One can understandably ask: Why then did these students chuck paper planes at the blackboard, in full vision of the teacher?

Vineeta’s answer: “I now realize that their behaviour in my class and other classes was just saying – I am a human being worthy of your trust and attention. When I could connect to that need of theirs, they took responsibility for themselves, their behaviour, and their learning.”

With this, we conclude the discussion around Indrani Barua’s question.

Note: Teacher Plus would like to inform readers that this is the last article in this column. In the Staff room is being discontinued for want of responses from teachers to the questions asked here. The column was started with the intention of bringing teachers together to ask and answer each other’s questions and come up with solutions. We thank the few teachers who have enthusiastically participated in the discussions featured in this column.

This discussion was triggered by the following question posed by Indrani Barua of Santiniketan:
Have you ever had a child in your class who is intelligent, doesn’t like rules, has very definite views on everything, a leader, likes others to play with him as he wishes, not a very cooperative child when it comes to teamwork, full of mischief whenever bored, instigates others to mischief for fun?

The author is the Founder-Director of Thinking Teacher, an organization that is working towards creating a network of reflective teachers who seek each other’s views on a range of issues pertaining to teaching and learning. She can be reached at [email protected].