Education, since time immemorial, has always followed a top-down approach.

A higher authority decides what needs to be taught, what tools are to be used, and to what extent education is to be imparted. Unsurprisingly, this has always been the case, because the imparting of knowledge has been traditionally conceived as unidirectional. One with the knowledge teaches those who do not possess it.

From the days of Socrates, to the ancient system of Gurukul, education has been set within parameters and boundaries, guided by a person, or a council. In the interest of the pupils, as well as the purpose of education, it is only right to say that the loyalty of such a council should be sacrosanct, keeping nothing but the interests of the students in mind.gemmy inflatable christmas decorations

Unfortunately, in the era of government-controlled education, this principle is very difficult to adhere to. Governments have a long history of micro-managing education, as it is considered an important aspect of culture. Historically, governments have always taken control of matters related to education and curriculum.

But how exactly does a government bring about this change? 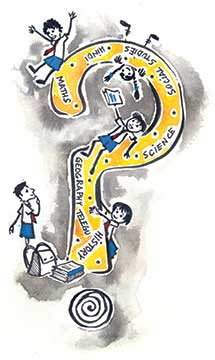 Initially, by altering the pedagogy involved in education. Syllabi are changed, books are rewritten and history and language are tampered with, in order to push the agenda of those in power. The most common explanation for this phenomenon could be the use of education for the spread of political, religious, or social propaganda.

India is no exception to this phenomenon. In the last two terms when a new government came to power at the Centre (2004 and 2014), the two different Central governments took a keen interest in monitoring and altering the way education was created, structured, and imparted.

And the impact of such high-handedness in educational institutions can be clearly witnessed.

In the domain of higher education, a number of key institutions remain without directors and chancellors. According to a report in The Times of India (March 2015), there is a faculty shortage of 32 per cent in IITs, and 22 per cent in IIMs. The quick increase in the number of IITs has led to an acute shortage of staff in some IITs. IIT (BHU) last year had a faculty shortage of 57 per cent, and IIT Delhi 50 per cent. The suggested 1-10 pupil-teacher ratio has also been a challenge to adhere to.

This was mostly due to the announcement of new IITs every time a government comes to power, without ensuring proper faculty in place. Another instance of interference in higher education: key members of the Indian Council of Historical Research, which lays the broad outline of history education in the country, have been sacked or replaced by new members by the government.

Coming to school education, a few months ago, there was an uproar about making Sanskrit compulsory in Kendriya Vidyala schools in place of optional German.

The wheels of change have begun to roll, even if only in a few states. The Rajasthan government last year set up a council that declared Isaac Newton and Akbar unfit to be taught to students as they were ‘foreigners’. Dinanath Batra, who was for decades an RSS pracharak has been appointed to a council of educationists in Haryana to ‘Indianize’ education. One of his first recommendations was to make the Bhagvad Gita compulsory in schools.

But how does this affect the actual stakeholders involved?

While it is easy to initiate changes at the top level, the actual people who are affected by the change in syllabi and curricula are the students, teachers, and school administration.

Most of the students I spoke to were clearly unaware of any such happening. They weren’t aware if their syllabus was being changed, or if it affected them in any way. I got a feeling that they were perhaps too young to make sense of such a phenomenon. As it is, students today are burdened with a wide array of subjects, activities, and events to take part in. The students I spoke to just wanted to clear the exams and go home for the holidays!

G. Harish, who studies in Class 8 at Kendriya Vidyalaya takes tuition for math, science, and English, but isn’t worried about social studies. “We follow our textbook and ‘guide’ for social studies, and we study from that.” It is sad that students who could have developed a keen interest in a subject now only think of memorizing details and reproducing them on paper. Harish, who ranks among the toppers of his class, was able to reel out the years and the details of the history of a topic, but on taking a look at the textbooks, I found that the chapters were more or less the same that I had learnt from more than a decade ago.

However, a few teachers I spoke to acknowledged the problems that arose from such a practice. When there is a governmental order to alter a school’s syllabus, it is the teachers who are the worst sufferers. Most teachers today are expected to prepare lesson plans in advance. A lesson plan takes time to master, and a certain degree of familiarity with it gives the teacher confidence. However, a constantly changing syllabus could play havoc with the teacher’s preparation for the subject.

Tanushree Angirish, who teaches English and Humanities at the Avasara Leadership Fellows program that works with primary education in Maharashtra, pointed out another peculiar problem with a curriculum loaded with political interests. “The Grade 4 history textbook in Maharashtra is only about the Marathas, especially Chhatrapati Shivaji. Shivaji is portrayed as the courageous hero who fought the Mughals to defend his people. This, from a young age, imprints on the minds of children how Mughals were just outsiders, who used deceit and trickery to capture and rule. As a teacher, it becomes difficult for me to teach such content since it gets frustrating to constantly disagree with the text.”

Also, it is generally social studies teachers who have to bear the brunt of political manipulation in education. This is because the subjects they teach are most vulnerable to alterations and manipulations – especially history, geography, and civics.

Rajashree Gandhi, who has taught grade 4 and 5 in schools in Hyderabad and Ahmedabad, has witnessed this change first hand. “History textbooks are pretty much fable books, where the emphasis is not on facts, but to instill ‘pride’ in the students. I wish someone studied the impact of doctored histories on students in greater detail. Successive regimes have mastered the art of erasure and rewriting”.

Also at the receiving end of the brunt of such changes are administrators – principals, co-ordinators, and supervisors whose work entails preparing time tables and schedules for classes. For example, the introduction of Sanskrit as a compulsory subject in Kendriya Vidyalaya schools must have proven a nightmare to the 1086 Kendriya Vidyalaya schools in the country. Not only does it mean a change in schedules and time tables, the administration in schools also shoulder the responsibility of finding new talent, training, and orienting them to the teaching methods of the school, and then assigning them the responsibility of teaching the subjects to the students.

Kavita Anand, senior educationist and Executive Director, Adhayayan Quality Education Services, says, “All governments are interested in influencing education to fit their agenda for the country’s development. In a democracy this should be preceded by country wide discussions. Most practitioners should be consulted and a real dialogue must take place. These deliberations should be published for parents and students to comment on before decisions are made. We must have greater transparency regarding the evidence that is presented. If solid evidence becomes the basis of making decisions, fewer people will have a difficulty accepting it”.

Rohit Dhankar, Professor and Director of School of Education, Azim Premji University opines that changing curricula and adapting is a part of the job of a teacher. However, he feels that changing curricula driven by political agendas is a serious problem. “Education is not for a year or two, it is an ongoing process that is necessary to maintain as well as change the society for the better. The changes in curricula that are driven by political agendas are necessarily sectarian – favouring one ‘section’ of the society. The political parties want to bring about those changes to use education in moulding young minds to accept their vision of society and life. This is indoctrination and should be resisted.”

In conclusion, Tanushree sums up, “New information has to be taught to children to help them look at events objectively – especially when the textbook itself doesn’t provide it. It is still possible for teachers who have the knowledge and resources, but it becomes next to impossible for the ones who don’t.”

However, Tanushree also sees a silver lining. “This can also be a blessing in disguise since we can teach them from an early age to question texts and perspectives that they are exposed to.” If anything, the constantly changing syllabus and curricula make the life of a teacher tougher in the classroom.

The author is a writer and aspiring novelist based in Hyderabad. He can be reached at [email protected].