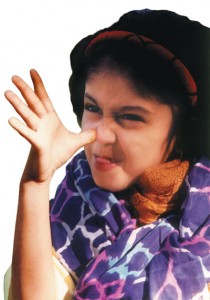 This bit of texting would have made George Bernard Shaw happy. First, the apostrophes, Shaw’s ‘uncouth bacilli’, have made their exit and then there is the absence of unnecessary letters. So it is in the language of texting, a language of what I like to call the ‘asap’ generation.

This ‘shorthand’ is the result of language adapting to the ever changing technology of our times. New technological developments such as the Internet and SMS (Short Message Service) influence the language and cause it to move in different directions. This impact on the way we now use the language is comparable to the effect of printing on language and culture.

In the 15th century, when Johannes Gutenberg, a German goldsmith and printer perfected the movable type, Europe changed unbelievably. Until that time, Latin was the only written language of any importance. Books were laboriously handwritten, were costly and the preserve of the clergy. Print lowered the cost of production of books which were soon produced in European vernaculars. Vernacular translations of the Bible reached thousands. Affordable books in the vernaculars led to the decline of Latin and to the development of modern languages. Levels of literacy rose due to the availability of printed books. Education was revolutionised.

Over the centuries, telegraph, broadcasting technology and television have all had their effect on the way we use language, but for its sheer scale, the Internet is the most powerful. It has empowered people to communicate with great ease. As more and more people use this mode of communication, the linguistic aspect assumes importance.

A new variety of English
Where is the language going with the Internet and electronic mail (email), which is what the Net was built on? Are we moving towards a new variety of English? If so, what is it, this language of email? Professor David Crystal, one of the world’s leading experts on language and reference publishing, points out that creativity is so great that the question of intelligibility arises. And it is all happening so quickly and changing so fast.

Which salient features of ‘Netspeak’ have influenced the way we use the language every day? The most obvious effect is on vocabulary – netizen, and so on. David Crystal has interesting examples of usage: It’s my turn to download now (i.e. I’ve heard all your gossip, now hear mine)…. E you later.

One can understand why email uses colloquial language. It is, after all, a ‘write as you speak’ form of communication. What characteristics of writing and of speech does it use? There is the reduced use of capitals and punctuation. (It is interesting to note that while we do not capitalise television, radio and so on, we write Internet or Net with a capital I or a capital N). Then there is the spelling. Here, the abbreviations of texting have had their impact. Vowels get left out – plz, giv, hav as do ‘unnecessary’ consonants – realy, beter. There appears to be a good understanding of the information value of consonants, of which letters carry the required information to recognise a word.

Understandably, the Internet and SMS bring with them the fears that are associated with new communications technologies. The concerns are social as well as linguistic.

What about teachers?
Which brings us to the question, where does all this leave us, the teachers? The linguist shudders at the prescriptive approach as it ignores the realities of everyday usage. What about teachers? Can we accept the changing linguistic landscape, the casualness of language use that is common now? We find ourselves encouraging our students to develop a more formal style of writing and an awareness of the differences between spoken language and written language. Are we concerned that standards are affected?

Language use in the classroom does not yet reflect the effect of texting. Is this because our students are able to keep the two codes apart? The Scottish Qualifications Authority, Simon Jenkins tells us, hasannounced that it will accept text-messaging short forms in school examinations. How many students in India would be in a position to use this? Would examiners see it as being desirable? There are a lot of questions here.

In this context there is another reality we need to keep in mind. The number of young people wanting to learn English is growing every day. Will a special variety of English make their aspirations yet another mirage or will they learn quicker, (with the mobile phone companies having put a mobile in every hand) unimpeded by notions of ‘correctness’? Having entered the world of email and texting late, I find I always ask myself if I am code-switching effectively enough to be accepted. Codes keep the uninitiated out.

Moving on to literature… we are told that a mobile phone company is converting seven English classics into text messages. A taste of what is on offer… the concluding line of Jane Eyre will read: MadwyfsetsFyr2Haus. The arguments put forward for this travesty are that the student will learn the importance of brevity, get to the heart of the matter, and that such ‘abbreviations’ will help during examinations.

India now, as never before, is an examination-driven society. Is this what young people will use while preparing for examinations? The very soul of great writing is lost in this exercise. By and large, the new English speaking generation in our multilingual society has only a slight acquaintance with their mother tongue and a working knowledge of English. Literature served up in this form is going to affect their language and life and impoverish them further.

Text messaging restricts sentence and word length due to the size of the screen. It seems to be a special use of language good for saying hello to friends, keeping up with cricket scores, booking tickets and so on. The language of email is different. David Crystal feels it is an ‘opportunity’ not a ‘threat’ to language education. We have to address prevalent concerns regarding standards. Are we ready?

Kavita Tandon taught Phonetics at the Regional Centre of CIEFL in Shillong before teaching English at Vidyaranya High School, Hyderabad. She can be reached at [email protected].