Gandhi’s proposed scheme of education called the Nai Talim is something that educationists and teachers are familiar with. There is a conspicuous paucity of schools on the lines of the proposed scheme also called ‘Basic Education’ although there has been a lot of historical debate on the merits and demerits of Nai Talim which was itself is inspired by Tagore’s scheme of education in which art and crafts played an important role. In Krishna Kumar’s words:

“The core of Gandhi’s proposal was the introduction of productive handicrafts in the school curriculum. The idea was not simply to introduce handicrafts as a compulsory school subject, but to make the learning of a craft the axis of the entire teaching programme. It implied a radical restructuring of the sociology of school knowledge in India, where productive handicrafts had been associated with the lowest groups in the hierarchy of castes.”

This was the revolutionary idea behind introducing a scheme, which was as Krishna Kumar puts it, “… intended to stand the education system on its head” since it “…favoured the child belonging to the lowest stratum of society.” More importantly, it sought to work toward what plagues the educational system the most today – the problem of social inequality and lack of opportunity, by trying “…to change the established structure of opportunities for education.”

One can only imagine what the fate of the country would have been had the scheme seen mass level fruition. Today, one can witness only rare instances of Gandhi’s ‘Basic Schools’ that one may chance upon in certain parts of the country. On a visit to Udaipur I had the opportunity to experience what may have been… and also see the new creature the original idea had become owing to the influences exerted by the mainstream education model in India.

On entering the school it seemed like any regular school – save for a statue of Gandhi paying tribute to the progenitor of the idea, standing not so tall in the middle of the garden. Moving into the school building was a happy experience with classrooms packed to the brim; full of happy children curious about who these visitors were. 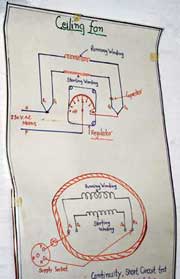 There was nothing to indicate that it was anything more than a regular but very well-maintained government school, and this was beginning to disappoint us. So we went around and asked if there were any classes on handicrafts happening. As it turned out, there weren’t any classes in progress but two teachers very kindly showed us around, giving us details of how the classes are conducted and answering questions we had. They also told us that besides the regular state-board curriculum the children spend a considerable amount of their time on practical skills.

The first room we were taken to was the carpentry class where we saw products made by the children. We knew instantly that these were by no means products of just any other art and craft class – they meant serious carpentry. The gentleman accompanying us showed us the various objects of day-to-day utility that the children of various ages had made – from simple toys to bangle-stands, Indian style peedhi or stools to a beautifully handcrafted low chair. This was a skill that could easily be used for professional purposes.

This was followed by a trip to the cookery class where the teacher showed us a cupboard full of very tempting pickles, juices and preserves or murabba as they are known. On enquiry we were informed, contrary to our expectation, that boys and girls are equally enthused about these classes. The general level of hygiene and sanitation of the class and the school in general along with the walls decorated with relevant charts and pictures bore witness to the quality of ‘education’ being imparted and the spirit of both the faculty and the students. 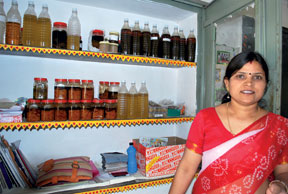 And finally there was the class on basic electricals. One look around the classroom told us that a completely hands-on approach was followed there. An old television set, a fan, irons and lamps were some of the items available for the students to understand and be able to repair. The teacher told us that the students could easily fix electrical problems at home and even if they did not take it up as a profession, that they were more self-reliant.

‘Self-reliance’ – swaraj – this is the key word which in fact was the motto of the proponent of this educational scheme. It was indeed heartening to see all that these children were being trained on – ways and means of being self-reliant and if desired, converting these skills into means of livelihood. 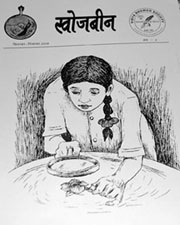 But is it as simplistic as this? While these skills are important and significant, in today’s context are they achieving what Gandhi sought the Nai Talim to achieve? Getting rid of social inequality? Should not these basic schools begin to incorporate skills which are relevant to today’s technologically charged world? But then again, would it be right to lose these traditional crafts in our bargain to keep up with technology? This is a choice that has no easy answers – characteristic of so many choices and questions posed to us in the field of education.

Historically, India is again poised at a critical juncture as far as education is concerned. The Right to Education and its implementation or the lack of it, will decide how the future will shape, just as the lack of implementation of the Nai Talim has brought us to where we are today.

I have not delved into the multifarious ramifications of the lack of implementation – that is left to your imagination… to think of the possibility that may have been… this was just a glimpse into what could have been all of our schooling experiences, but was not.

The author is a student of education (elementary) at the Tata Institute of Social Sciences, Mumbai. She can be reached at[email protected].