India enjoys the distinction of having a rich and diverse number of domesticated animals. From yaks and camels to ducks and pigeons. We also have a wide range of breeds within each species. For example in cattle we have over 30 breeds – ranging from the large and majestic Sahiwal from Punjab to the tiny Vechur of Kerala. Among sheep, over 40 breeds from the woolly ones to those that do not have any wool. Among goats, over 20 breeds from the Pashmina goat of The Himalayas to the Black Bengal of Calcutta and the Malabari of Kerala. The two humped or Bactrian camel is found in the extreme North in Ladakh while the single humped camel is found in the states of Rajasthan and Gujarat. The diversity of livestock breeds has evolved in response to different human needs. Thus, you have milk breeds of cows or dairy cattle like the Sahiwal, Red Sindhi and Gir, you have work animals or draught breeds of cattle like the Nagore, Khillar, and Kangeyam and you also have dual purpose animals, those that can be used for milk and for draught such as the Hariana and Deoni. In India, interestingly we also have semi-domesticated species like the Mithun in the north east.

Domestication of animals meant the need to hunt reduced and humans could have easy access to milk, meat, eggs, and fibre. However, it was when agriculture and livestock rearing were brought together successfully and domesticated animals could help in agricultural tasks that human civilization stepped beyond the hunting – gathering stage. Since then, domesticated animals have travelled all over the globe and that is how the large diversity of breeds have been formed in response to the diverse needs in different areas. 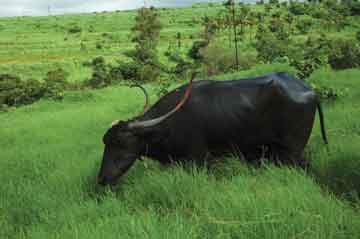 Depending on the area of domestication and the needs of livestock rearing communities, different types of livestock production systems have evolved such as pastoralism and agro pastoralism. Pastoralism is a system of livestock rearing where large herds of animals are herded and grazed on available pasture land. Animals move from place to place looking for available pasture. Naturally, this system is possible where large extensive tracts of grasslands are available. As grasslands and grazing lands came under cultivation and land available for free grazing decreased, farmers began to grow fodder grasses such as berseem and lucerne to feed their animals. In India, crop residue is often used to feed animals. Crop residue includes all those parts of crops, which are not used for human consumption but can form parts of animal diet. These include straws of paddy, wheat, and other cereal grasses, straws and stovers of legumes and oil seed cakes after the oil has been expelled from the seeds. Using crop residue is an efficient way of raising animals as the same land caters to both human and animal needs. Under agro pastoral systems, agriculturists invite pastoralists to graze on their land after the harvest. In this process the animals clear the land of stubble and simultaneously provide the land with manure. Both pastoralists and farmers benefit from this system.

Recently though, there have been many threats to diversity. Certain breeds have developed as key species such as the Holstein Friesian for milk. All over the world, this breed is being promoted as a dairy species. Often, used in cross breeding programmes it is gradually replacing local varieties. Likewise in poultry a few breeds such as the White Leg Horn and Rhode Island Red and strains such as the Lohman and Ross have been developed and are bred throughout the world in poultry farms. Simultaneously, development programmes in India have introduced crosses such as the Kuroiler, Vanaraja, giriraja and grampriya all of which have been developed from various non-Indian varieties of poultry into backyard poultry farming replacing breeds like the Kadaknath. Natural calamities, war, misguided development programmes and pandemics like avian flu can also replace livestock diversity. This would be a tremendous loss as these breeds have been carefully selected and bred over time for specific traits. While some breeds are good producers, others have the reputation of being resistant to disease, tolerant of climatic stresses and fodder shortages. This large, wide and varied gene pool is an insurance against problems we could face in the future.

Grasslands and forests are also under threat due to different forces. While in some countries such as Brazil, forests have been cut to form grasslands for raising animals, sometimes grasslands themselves are diverted to other uses such as agriculture. In many cases, the entire floral diversity of a grassland or forest is unknown or unrecorded. As the land use pattern changes, we risk the danger of entirely losing a portion of plant diversity hitherto unknown to humankind. These could include valuable medicinal plants and food sources.

Efforts to preserve our diversity will thus require many approaches. This would have to begin with recognizing the value of diversity, mapping available diversity, having an enabling policy, which supports diversity, and ultimately helping programmes which support diversity.

The author is a veterinarian and founder director of Anthra an NGO working on issues of livestock health and development. She can be reached at [email protected].