When the daily routine of life and work becomes a chore rather than pleasure, it surely is time to take a break. And, if the retreat rejuvenates and refreshes in body, mind and spirit, then that is just the antidote one needs.

When I chose teaching as a profession, I was inundated with euphemisms such as, ‘What a noble profession!’ You will be instrumental in changing/moulding the future! ‘This will be a very fulfilling job!’ etc, etc. Full of such noble ideals, I embarked on my journey with enthusiasm. The initial euphoria wore off quickly, and as I found myself flooded with rigorous work challenges and shortage of time I found every excuse in the book to park my guilt on. I read every self-help book I could lay my hands on but concluded they were not written for ‘teachers’ but for other professionals. What I could not put a finger on was where was the bliss associated with this profession? It was exhausting, challenging and emotionally draining, not refreshing, stimulating or spiritually exhilarating at all. Time for a break.

That was when I heard of a workshop on NLP-K which said that it would help one understand the ‘Power of the Mind’ and identify limitations to success. I thought this was exactly what I needed. It was a weekend workshop that asked for commitment of time. This workshop taught me about the ‘Unconscious’ mind. It determines our behaviour and responses and reactions to experiences in life. The workshop empowered me with a tool to communicate with my ‘Unconscious’ mind. NLP is an acronym for neuro linguistic programming, literally the language of the programs in our mind that run our life! And K stands for kinesiology, a method for communicating with this software. When it comes to our computers, we ensure that we have a good anti-virus software installed, frequently clean up the system and regularly upgrade it to remove old programs that are no longer efficient. But with our minds, even though it accumulates a lot of negativity and ineffective programs over the years, we do nothing to clean it up or upgrade it. Hence, we continue to act out of old unconscious habits and beliefs and continue to face the frustrations and fruitlessness that we always faced. If we were aware of these limiting beliefs and knew a way to reprogram our minds, then we would be able to do what Gandhiji asked us to do when he said ‘Be the change you want to see around you’. 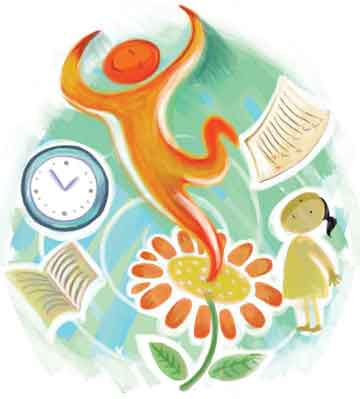 The first step is to become aware of the power of the unconscious mind, the second step is to initiate a 2-way communication with it and the third is to reprogram it to install empowering beliefs that bring changes in our perspectives to life At the end of the two-day workshop, the shifts in awareness that I experienced were amazing. I no longer operated from a space of fear and instead moved into a space of trust that I had all the resources I needed within me. My challenges now became stimulators for spiritual growth. I began to reframe my goals and was able to ‘see’ clearly what I needed to do to achieve them. My communication improved and I no longer felt a need to react to situations. Instead I became curious to know what learnings were in store for me.

For instance, when correcting notebooks of the so-called ‘weak students, I found myself making mental notes as to how a particular concept had not been suitably communicated by me, further, my remarks also took on a positive reinforcing tone such as ‘Well Tried!’ rather than the demoralising ‘Incomplete!’. I no longer blamed anyone or something else for my problems, instead I was able to take responsibility and identify the changes I needed to make in myself to see the change around me that I wanted. For instance, when I was unable to meet a deadline regarding worksheet preparation, instead of the usual excuse of not finding time, I accepted that I had not given it enough priority, made note of it and the next time, gave it enough priority to get it done on time. I no longer felt rushed for time, I found myself with plenty to spare.

This is definitely one retreat I recommend to all teachers. These workshops are conducted in several major cities in India. For further information, one may contact me on 9966107711 or Omana Hirantara on 9849747170 or email: [email protected].

The author is based in Hyderabad. She can be reached at [email protected].