In the week starting 20th of February 2010, for five days, amidst the hills and lakes of the beautiful white city of Udaipur, a motley group of individuals came together as a study group on the Philosophy of Education organized by three institutions – the Tata Institute of Social Sciences, Mumbai, Philosophy of Education Society, Great Britain, and Centre for Philosophy and the Humanities, Manipal University. The Vidyabhavan Society of Udaipur which was established in the early 1900s very kindly hosted the event and also provided accommodation for the student population attending the event. The theme of the study group this year, (which was also the first time this study group came together) was ‘Reason and Reasoning’. The key resource persons were philosophers and educationists such as Sundar Sarukkai from Manipal University, Arindam Chakravarthi who presently teaches philosophy at the University of Hawaii, USA, and renowned educationists from UK such as Christopher Winch, David Carr and Jan Derry. The convener of the session was Padma Sarangpani.

As students of education, most of us felt that day-long sessions on philosophy would have a debilitating effect on us and that by the evening, we would be tired and ready to hit the sack. But surprisingly, all the five days ended with high energy levels among the participants, with discussions and questions being carried on into dinner. Well before the meet, relevant readings on the theme, selected by the key speakers had been shared with the participants so that the necessary backdrop and framework were available to all. Readings ranged from Aristotle and Western philosophy to Vygotsky and Piaget to Indian logic and the concepts of knowledge in the Indian philosophical tradition.

It was this juxtaposition of the Western and Indian philosophical traditions that was in fact one of the main purposes and themes of the meet as well. It is well known that the Western traditions of reason, rationality and science that evolved during the Enlightenment have been dominant all through the world via forces of colonization and cultural dominance of the West. India has its own knowledge systems and traditions which have been largely neglected and ignored by Indians themselves owing to a mistrust and/or lack of understanding. Indians have thus been accused of lacking a ‘sense of history’ by the Westerners and also lacking ‘rationality’ albeit in the western sense of the term. This is because of differences in the conception of ‘history’ or ‘rationality’ and consequently the different worldviews in the two cultures. It was this aspect that was focused on heavily in the discussions. 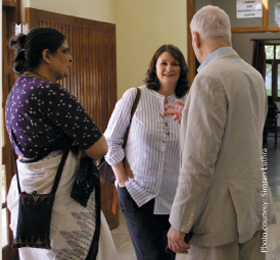 This importance of such an engagement with our own knowledge systems and traditions of logic and reasoning needs to be understood by Indian teachers and educationists, because culturally and socially we are embedded in the world-view that is different from the Western, while our present education system is rooted in Western rationality. There is then this very dangerous disconnect which needs to be remedied, along with a wealth of indigenous knowledge systems to be reclaimed.

Several other relevant questions were also thrown up – questions which have no easy or definite answers, but need to be engaged with not just at the policy level, but at the level of the teacher. Some of these were:

The general feeling is also that including philosophy of education in teacher training courses is usually a very theoretical and almost futile enterprise. Honestly the way it is conducted in most teacher training courses, it is exactly this. It was also joked at one point that in any discussion with teachers, if the ‘child’ is not mentioned every 15 minutes, what is being discussed will be considered useless. What teachers need to realize is that the child is part of a larger context and discourse which also needs to be understood thoroughly. Education is about human learning and philosophy delves into the question of what ‘ought’ to be. Not all questions of education can be answered by psychology and sociology – there is always the question of how do we aspire towards the ideal? The questions of moral and ethical importance form the critical space that is occupied by philosophy and this is the relevance it has for teacher development. True, not all that transpires in such discussions find immediate implementation by teachers, but what a teacher may gain by philosophical enquiry is the ability to form judgments; to know how to arrive at a judgment – to know the principles of how to judge a given situation or how to deal with the syllabus. It is those higher ethical and moral choices that more than anyone else an educator or teacher has to make, that philosophy of education assists in. And this was amply demonstrated in the discussions at the study group.

The study group will reconvene again sometime this year at another venue with a new theme. All in all, it was a luxury to be able to partake in such an event, but then again, it seems almost necessary that all those interested in the human condition and the processes of learning and ‘being’ human participate in such forms of enquiry.

The author is currently pursuing her Masters in Education from the Tata Institute of Social Sciences, Mumbai. She can be reached at [email protected].