When we started going to school and began learning English, what were the first things we were taught? Before we were told about the mystery of ‘A’ is for ‘apple’ and ‘B’ is for ‘ball’, teachers kept us entertained by getting us to recite nursery rhymes. 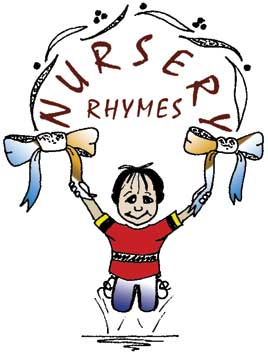 The all-time favourites, ‘Twinkle twinkle little star’, ‘Jack and Jill’ and ‘Ba-ba black sheep’ were some of the rhymes we took great pleasure in learning. When we had successfully memorised a rhyme, what is it that we did? We went home, stood before our parents, and proudly recited the lines. While we were performing, our parents listened attentively with a broad smile plastered on their face, and when we completed our recitation, a chorus of ‘Very good, very good’ was accompanied by some enthusiastic clapping. If an unfortunate guest dropped in during this phase of our childhood, we were invariably summoned by our parents to the drawing room: after being paraded, we were requested to recite some of the rhymes that we knew! The poor visitor had no choice in the matter; he/she had to sit glued to his seat and listen, and at the end join in on the hoopla that followed. Like Leonardo DiCaprio years later, we exited the room saying, ‘I’m king of the world!’

Learning rhymes was fun; we felt we were acquiring English. We weren’t really worried about the meaning of a rhyme. When you think about it now, some of the rhymes don’t make any sense. Why did Jack and Jill go up a hill? Normally water flows down a hill doesn’t it? As kids, our job was not to question ‘Why’; we merely did whatever our teacher asked us to. Some of the rhymes demanded that we perform along with our fellow classmates.

A rhyme which required us to exercise both our vocal cords and our body was ‘Ring a ring o’ roses’. It compelled us to hold hands with our fellow classmates, move around in a circle, and then at the end ‘fall down’. When we fell, instead of crying, we all giggled hysterically. Unlike in real life, it was fun falling down. Since we weren’t unduly bothered about the meaning of the rhyme, we never asked the teacher why we had to fall down.

Come to think of it, why did we fall down? What is this ‘ring’ of roses and why did people carry ‘posies’ in their pockets? What is the fun rhyme ‘Ring a ring o’ roses’ all about? Some scholars believe, if teachers knew the story behind the rhyme, they would think twice about teaching it to students. According to them, this rhyme which we all associate with fun, is actually about death! It is about the plague which used to infest Europe quite frequently in the 14th and 15th centuries. When someone caught the plague, his/her skin used to break out in boils; these boils used to be pink or rose in colour: it is these boils, and not the beautiful rose flower, that the first line ‘ring a ring o’ roses’ refers to! People walked around with flower petals (posies) in their pockets because the stench of death was everywhere. As people were dying very quickly and in great numbers, not all of them could be buried. There were rotting bodies on the streets; hence the need for posies. The ‘husha busha’ in the third line of the rhyme is actually ‘Atishoo, atishoo’, the sound of sneezing. According to the rhyme, the individual sneezed and then proceeded to fall down – in other words, he fell down dead because he too had become a victim of the plague.

This is just one of the interpretations of the rhyme. A gory one, I agree, and a far cry from the joy and sounds of laughter that we normally associate with the rhyme. Similarly, there are many words in the English language which we now associate with good things, but which had an ominous beginning. Take for example, the word ‘bonfire’. The word immediately conjures up images of people sitting around a circle, chatting, singing songs, and in general enjoying themselves. Do you know that the word ‘bonfire’ is actually the result of a misspelling? The original word was ‘bonefire’. A ‘bonefire’, as the word suggests, was a fire of bones: it was a huge fire in which bones were thrown in to reduce them to ashes!

The plague, boils, death, ashes… not the ideal way to end an article. Here’s something that I hope will bring a smile to the face.

History was made in America last month when Barrack Obama became the first African American to be sworn in as the President of the United States. As everyone knows, Obama was a Senator from the state of Illinois; and one of the famous cities in the state is Chicago. Do you know that the name Chicago is actually a corruption of a Native American word ‘shika:konk’, meaning ‘at the skunk place’. The city actually means ‘a place of bad smell’. Chicago literally means skunk town! Let’s hope that Obama’s Presidency doesn’t create a stink like George Bush’s did!