On a hazy morning of March 7, 2020, I reached Umang at about 9:30 a.m. It took me an hour and thirty minutes to reach there from my residence in Delhi. The school is located at Bari Road, Lalagarhi, Ganaur, Sonipat. It was established in the year 2012. I had applied for the post of a primary teacher and had been invited for an interaction. This was my first visit to the school. During my short visit, I was allowed to observe, participate in some of the activities and interact with the students. It was a refreshing learning experience for me, as this was my first visit to a democratic school.

As I approached the school, I saw students entering the main gate. They were not in uniforms because this school did not have one. As there was still time for the assembly some students went to their classrooms to sit and talk, while a few others were playing in the playground. When all the students had arrived, a teacher took the primary students to the library for their end-of-term exams. 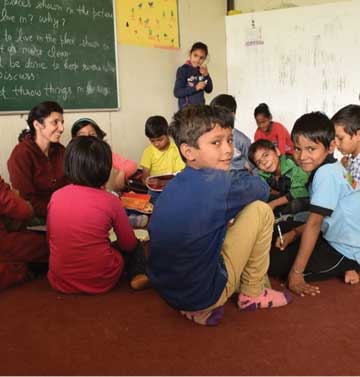 As one entered the school, on the right side, there were washrooms, some space where a car was parked followed by the rooms. There were a few classrooms including a multipurpose hall, a computer lab and a library. All these rooms faced the playground. On the other side of the playground, there was an office, a few rooms and a kitchen.

The older students, with the teachers, the school director and I, formed a circle in the playground. A teacher asked the students if anyone wanted to talk or discuss about anything. A girl initiated the discussion by explaining what the children wanted to do for the day. Before the lunch break, the children wanted to do some activity (which would be decided during the assembly), and after the lunch break, they would play Holi in school as the festival was round the corner.

This is a regular practice in this school. The plan of the day is discussed by a student representative, while the teachers add their ideas to help modify the activities and make them more holistic and student-centered.

After this circle time, students and teachers cleaned the school. They swept the classrooms and walkways. Some students cleaned the hand wash area and the washrooms.

The cleaning session was followed by the assembly which took place in the multipurpose hall. Students along with three teachers and I sat on mats on the floor. They discussed what activity to do in the first half of the day. From the many choices put forth by both the students and the teachers, a teacher asked them to choose between painting and watching a movie. Students were asked to raise hands. Most wanted to paint, but a few wanted to watch a movie. To the students who wanted to watch a movie, a teacher asked for suggestions. The students decided to watch ‘Gully Boy’. Further concerns and issues that came up during the assembly were: how to play holi and why some students skipped warm-up (exercise) sessions.

The focus during such assembly meetings is on democratic dialogue, where every voice is heard and valued. Everyone has the opportunity to speak, raise concerns, and discuss problems. In the assembly, they further discussed how to play holi by not using water and only applying colours on those who want to play holi. It was decided that they wouldn’t forcefully throw colours on anyone without their consent.

After this, the students who wanted to paint sat in the multipurpose hall and the others moved to another room to watch the movie. A few students set up the music system in the hall for the afternoon’s celebrations. 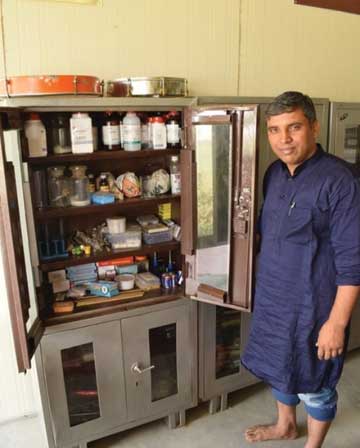 Around 12:15 p.m. (after lunch), the students started playing holi with gulal (colour). The teachers also joined them. Bollywood songs were played. They played with colours and danced for about an hour and thirty minutes. In the end, everyone took pictures together. The day ended with the students and teachers cleaning the school and going back home.

During my conversations with the school founder, Mukesh Digani and school director, Sudhir Singh, I got to know a little more about the school. Umang’s aim to provide a child-centered learning environment is central to its ideology of democratic participation of teachers and students in the learning process. It follows the principle of no punishment, judgment and reward, also no prayer of any religion is conducted. A teacher-student ratio of 1:20 is maintained to ensure that students learn with each other and at their own pace. The school does not charge any fees. If any parent(s) wants to contribute as per their convenience, they can. The school does not use textbooks by private publishers. They make use of textbooks by the National Council of Educational Research and Training, Eklavya (an NGO, which develops educational resources), and Digantar (another well-known alternative school in Jaipur, Rajasthan). These textbooks and other reading materials are kept in the library. Mukesh Digani’s daughters are students of this school too.

The school did start pre-primary classes a few years ago, but due to lack of resources and teachers, they soon shut down this section.

The one question I had when I got to know about this school was – Why is there a need for a ‘democratic school’ in a democratic country like India? After my visit, I think I have the answer to this question. The democracy we are living in cannot be an example of true democracy. It is challenging to achieve true democracy, but we need to move forward by taking small steps in whichever way we can to achieve it. There is always room for betterment and the steps taken towards betterment are the roots of a true democracy. If a school provides us the space to exercise our democratic values then we can start understanding and questioning what is outside of the school. The everyday experiences with these values are important to imbibe within ourselves to shape us for an ideal democratic world.

The author is a postgraduate in education with a specialization in early childhood care and education from the School of Education Studies, Ambedkar University Delhi. She is interested in understanding gender issues in education. She can be reached at [email protected].