As the day of the inauguration of the 44th American President unfolded, I felt it apt to reflect on what we, the citizens of the world, have been part of in the past few months. All of us witnessed a powerful movement take place in the United States. This movement embodied a unity of people, all people, no matter what class, level of education, religion and race.

This change wasn’t just because of one man. Barack Hussein Obama is only a catalyst of the movement with whom the people of America are able to identify and regain control of their rights, their morals, their independence and their co-dependence on one another. The real soul of the movement is the body of people, who supported, worked, donated and felt deep-down, that they really could “be the change that we seek”.

In Washington DC, I felt a sense of hope and triumph. People had come just to be a part of the beginning of a new and colourful history. From grandparents to toddlers, everyone withstood the sub-freezing temperature and cheered on the president as he was sworn in. But his solemn and direct inaugural address silenced all non-believers. I was truly fortunate to have been there to watch history being made and feel the coming alive of the “yes we can” campaign.

The Presidential Youth Inaugural Conference organisers had arranged for us to meet several other public figures, including the former Secretary of Defense, General Collin Powell, who was very candid and narrated to us stories of the dark and black American history. We also had Al Gore speak to us, a Nobel peace prize winner and a man on a mission. Funny and prompt, he took sensitive questions regarding US policies on Iraq and Climate control and also pointed out flaws and hypocrisy in world and American politics. 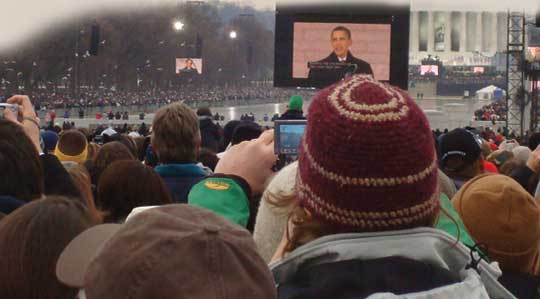 Our last eminent speaker was Archbishop Desmond Tutu, the second South African to be awarded the Nobel Peace Prize, a man with a child’s heart and the spirit of a partygoer. Dancing on stage every time he said something funny and enacting scenes from the Bible in ways unlike a preacher, he was a huge hit with all of us only because he was human.

The last day saw us go to the inaugural ball where a private concert with Chris Daughtry and his band saw us bid farewell to the end and welcome the beginning of a new era and glorify the dynamic leadership of Barack Obama.

The author is a 12th class student at Hyderabad Public School. He can be reached at [email protected].