What is GPS?
Whether you want to visit a restaurant across town or travel to a remote mountain village, GPS devices make it quicker and easier to find your way. From police officers to hikers, oil drillers to mountain climbers, and executives to vacationers, GPS provides directions to get you where you need to be. 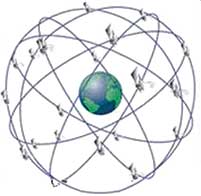 How does it work?
Let us first understand how location is found on a 2D plane or a flat surface.

Triangulation
The location of an object can be determined by measuring the distance of the received signal by the hand held GPS device from three different points. Triangulation is used to pinpoint the location of a cell phone, for example.

Let us assume a device in your phone can calculate how far you are from a radio tower, Tower 1. It can tell you where you are, but you could be anywhere on the circle with Tower 1 as the centre and distance as the radius! This is the simple property that creates a circle. A moving point at fixed distance from a stationary point makes a circle.

Now suppose your phone can also calculate your distance from Tower 2. Then you could be anywhere on the points of intersection of the circles. And as we know, two circles intersect at two distinct points. 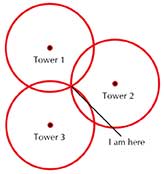 Turn the above into a 3D model and you call it Trilateration!

How does the receiver calculate the distance?
A satellite sends a signal giving location and the time of transmission. The signal travels at the speed of light (a constant). It reaches a GPS receiver at a slightly different time. A GPS receiver can tell how long it took for the satellite signal to reach it.

Hence the receiver could be anywhere on a sphere of radius 2.7 x 107 m around the satellite!

What’s the use?
For anyone who has ever been lost while hiking in the woods, boating in the ocean, driving in an unfamiliar city, or flying a small airplane at night, a GPS receiver is a miracle. It is not only used for travel directions but also by ships and courier businesses.

Search the Internet for more uses and you will be amazed!

From where did GPS originate?
The foundations of the modern GPS were laid during the early 1960s by the US military. In 1973 a design was approved by the US government. This was to become NAVSTAR. The first satellite for the NAVSTAR GPS was launched in 1974 and from 1978 to 1985 another 11 were launched for testing purposes. The full set of 24 was completed in 1993. 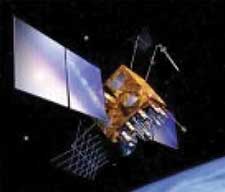 Initially, GPS was only for military use. On 1st September 1983, a Korean Airlines flight KAL007 from Anchorage to Seoul went off course into USSR airspace and was shot down by a soviet fighter jet. All 269 passengers and crew were killed.

Two weeks later, US President Ronald Reagan proposed that GPS be made available for civilian use to avoid such navigational errors again. Then private companies were contracted to create portable GPS devices. In 1996 president Clinton signed a directive allowing civilian and commercial use of GPS. We got our handheld devices!