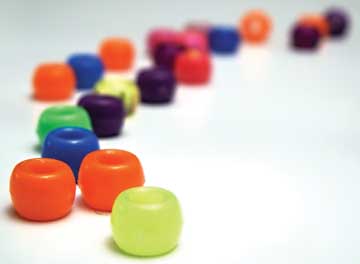 Mothers have amazing teachers called children. My daughter Priya taught me a precious lesson when she was about four years old. Helping me arrange eggs in the refrigerator, she said, “Seven is not a partner number, six is a partner number.” When I sought clarification, she explained six eggs can be arranged so that each has a partner on the egg rack. But you can’t do that with seven eggs. Well, she had caught on to the concept of odd and even numbers. The term, ‘Partner numbers’, was her contribution. Much later, when she had to learn about odd and even numbers, I reminded her of this incident. We extrapolated the idea to prime and composite numbers with a small activity that consisted of arranging beads in rows and columns. Sixteen beads could be arranged in rows of 8 X 2 or 4 X 4. You could not do that with 17 beads. Back then, I didn’t realise, we were using constructivism.

Twomey Fosnot (1989) defines constructivism with reference to four principles: learning, in an important way, depends on what we already know; new ideas occur as we adapt and change our old ideas; learning involves inventing ideas rather than mechanically accumulating facts; meaningful learning occurs through rethinking old ideas and coming to new conclusions about new ideas which conflict with our old ideas. A productive, constructivist classroom, then, consists of learner-centered, active instruction. In such a classroom, the teacher provides students with experiences that allow them to hypothesise, predict, manipulate objects, pose questions, research, investigate, imagine, and invent. The teacher’s role is to facilitate this process.

One technique that could serve as a guide to facilitate constructivist learning is the use of the 5E model, the five E’s being Engage, Explore, Explain, Elaborate and Evaluate. A sample lesson plan for the topic ‘Angles’ in class five mathematics is given below. At the end of this lesson students will be able to: (i) recognise angles in complex situations, (ii) draw an angle of given measure and (iii) measure a given angle. 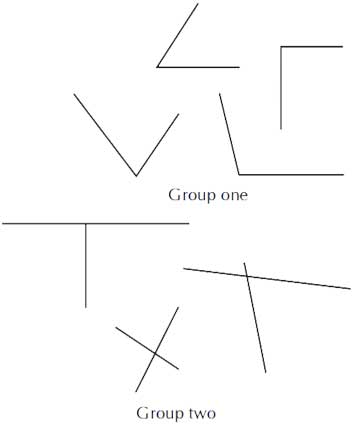 Engage: Provide each student with two sticks and ask them to join the sticks using any adhesive material. Let students move about to observe what the others have done. Let the teacher classify these creations depending on where the sticks are joined. All those joined at one of the two ends of the sticks are put together. If the sticks have been joined anywhere in the middle, those creations are put in a separate group (See Figure). Let students find reasons for such a grouping. This will lead them to the concept of angles. The teacher will have to introduce the term ‘angle’. However, the concept that an angle is the union of two non-collinear rays will be derived by the students. Do not expect the students to use any technical terms that they are unfamiliar with. Insist on the formation of the concept. (Inform students that group two contains more than one angle. The teacher may use these figures later when the concept of angle is well formed.)

Explore: Let the students explore the classroom and make a list of all the places where they see angles. Provide initial guidance if they face any difficulty. This activity can be done in small groups of three or four. Let students list on a chart paper places where they found angles. It would be a good idea to have them sketch their observations. The next step in the Explore stage would be to help them measure angles. At this stage perhaps the teacher’s demonstration would be effective as emphasis on the right way to use a protractor could be stressed on. Distribute sheets with angles to be measured. To introduce the students to types of angles, an activity could be arranged, where angles of different measures are put in three boxes labelled acute angle, right angle and obtuse angle. Have students measure the angles in each box and conclude the basis for classification.

Elaborate: This stage requires the students to extrapolate their knowledge to new situations. Have them measure angles in various polygons and classify them. Have them create acute angles, right angles and obtuse angles with the right movements of their elbows. Identify angles in the letters of the alphabet. Show them architectural designs and have them identify various angles. Include structures like the Leaning tower of Pisa. Let students read about why it inclines. Draw a circle to represent the earth and show how a place on say 20 degree North latitude makes an angle of 20 degrees with the centre of the earth. Let them provide examples from their P.T. exercises where angles are involved. The whole focus is to be aware that angles pervade so many different spheres of daily life.

Evaluate: The step of evaluation could be in the form of a test, a quiz or even a craft project where the students create an object and identify and measure the angles in the craft article.

The following guiding principles of constructivism direct the learning process: posing problems of emerging relevance to students, structuring learning around primary concepts – the quest for essence, seeking and valuing students’ points of view, adapting curriculum to address students’ suppositions and assessing student learning in the context of teaching. 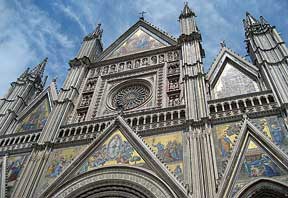 Constructivism uses a process centred, child directed approach. Langer and Applebee (1987) explain that when using constructivism a context is created within which students are able to explore new ideas and experiences. Within this context, a teacher’s role in providing information decreases and is replaced by a “strengthened role of eliciting and supporting students’ own thinking”. The approach focuses on shared responsibility; the onus of learning is on the student. Student empowerment and autonomy may be aided by encouraging students to ask questions and by making them active learners. Enthusiasm is maintained and learning is productive. Constructivism brings about correlation between subjects and hence knowledge acquired becomes contextual thus forging a bond with real life. Benefits are also accrued in the form of imbibing vital life skills as working in collaboration, decision-making and critical thinking. High time then that all teachers become familiar with the nuances of constructivism and change their classrooms from traditional teacher-centred classrooms to constructivist learner-centred classrooms.

The author is a teacher educator at Pushpanjali College of Education, Maharashtra. She can be reached at [email protected].