The Vikramshila school in Bigha (a small village, about 3 hours from Kolkata) was started in 1997 as an experiment in alternative curriculum, to see how village life (and livelihood) could be linked with school learning. In its decade long journey, the school has evolved into a community hub, a resource centre and a role model for the village, leading the way not only in education but in all aspects of village life. The school revived traditional methods of cleaning ponds, while bringing in modern methods of water testing; it led an active campaign to convince the farmer community to switch to organic farming by adopting a piece of land and proving the benefits of organic farming. One of its greatest achievements has been running a successful mobile library. The culture of reading and libraries had died down in Bhiga over the years, and it was important to revive it in view of the Internet revolution, now knocking at the doorstep of our villages. 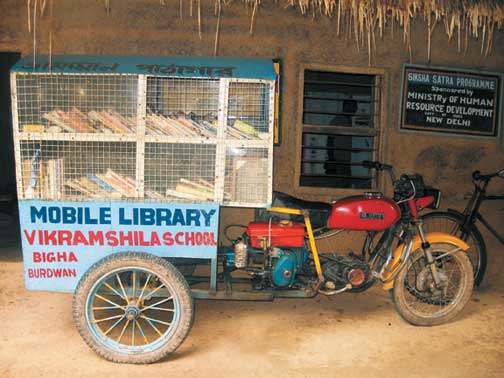 Although there was a library in the Vikramshila school which was open to all, no one used it apart from the children of the school. Finally Arun Sain (Principal) and his team decided that if the community wasn’t coming to the library, then the library would have to go to them. This was the genesis of the Mobile Library in Bigha Village. They started out in August 2006 with the 5000 books which were already in the school library, and decided to build an enclosure attached to a motor cycle to ferry the books. One of the teachers would drive the motor cycle and also serve as the librarian. At this point we had many questions: Who would read the books? What kinds of books would they prefer? What route should the mobile library take in order to ensure maximum coverage? And how should they ensure that the existing libraries in the area would be revived as a result of renewed interest in reading? Finding answers to these questions was not simple, but this is how Arun da and his team went about it.

To start with they did a survey of the number of people with reading abilities and their occupations. Based on this they decided to further customise the choice of books made available in the library. Next, in order to maximise the opportunity of advocacy through the library, they decided to establish three carefully chosen hubs which would serve as parking stops for the mobile library. The first was a village which used to have a vibrant community library, now non-functional; the second was a village with a library in a high school, also non-functional; and the third was a village that had never had any kind of library. At each of these villages a vantage location, usually outside a high school, was identified as the stoppage point. The librarian would take the mobile library from Vikramshila school to each of these three parking stops once every week. He would start in the morning, making brief stops at the villages along the way, issuing and taking books back, and remain parked till evening at the parking stoppage. He would return in the evening via the same route, once again issuing and taking back books. There was also a local coordinator (a youth volunteer) appointed at each of these locations. The coordinator would know the local community and assist in the smooth functioning of the library.

The first pitfall came when they realised that on their way to the three designated parking stoppages, they would be covering 52 villages and four busy village markets. There was an overwhelming response from the most unexpected quarters, and an urgent need to increase the number of books. When the number of books was increased, the weight of the books was too much for the motor cycle and it had to be converted into a three wheeler. High school students were borrowing the predictable titles: novels, children’s books and reference books to assist in their studies. But the main reason for the success of the mobile library among the rest of the community was that everyone was able to find a book that was of immediate interest to them, even if they were not in the habit of reading for pleasure. Technical books on agriculture and pisciculture have been a huge hit with the farming community. Recipe books, books on mythology and herbal medicine are borrowed repeatedly by housewives. The most unexpected reading community emerged from the vendors at the village markets who borrow collections of short stories in the morning to tide them over the lean hours of the afternoon and return them in the evening when the mobile library returns to Bigha.

We know that the library has been a resounding success because Arun da is already talking about graduating from the three wheeler to a four wheeler to take the mobile library to villages. The large community library that was defunct for more than 10 years has also started showing signs of resurrection.

The author works for Wipro Applying Thought in Schools and was earlier with Vikramashila. She can be reached at [email protected].